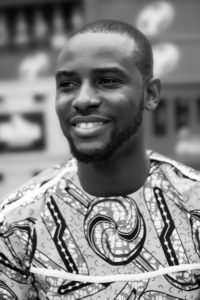 We’re thrilled to announce that Orbit has acquired an incredible new epic fantasy series from Suyi Davies Okungbowa, author of David Mogo, Godhunter. An evocative tale of myth and magic, THE NAMELESS REPUBLIC trilogy invites readers into a rich and vibrant world inspired by West-African empires.

In the thriving city of Bassa, Danso is a clever but disillusioned scholar who longs for a life beyond the rigid family and political obligations expected of the city’s elite. A way out presents itself when Lilong, a skin-changing warrior, shows up wounded in his barn. She comes from the Nameless Islands–which, according to Bassa lore, don’t exist–and neither should the mythical magic of ibor she wields. Now swept into a conspiracy far beyond his understanding, Danso will have to set out on a journey that reveals histories violently suppressed and magic only found in lore.

Intrigued? I hope so! Here are a few words from Suyi, including the top five things he’s most excited about in the upcoming series:

It’s a dream to be working with the good folks at Orbit on this series. I feel like I’m literally riding on the backs of giants who have emerged from these very same stables. The Nameless books are in good hands under the Orbit banner.

This series is my love letter to all of us who know the magic that makes West-Africa tick–the lore and music, the harmattan and petrichor, the jollof rice and fried plantain. You can expect to enjoy:

The first book publishes Summer 2021 and, in the meantime, please join us in welcoming Suyi! You can find him at https://suyidavies.com/ and on Twitter at @IAmSuyiDavies.