To welcome you back to the star-studded, action-packed world of the Nova Vita system, we’re launching the incredible new cover for MEMORIA, the sequel to Kristyn Merbeth’s FORTUNA. In book two of this space opera trilogy, the Kaisers find themselves stuck on a planet on the brink of war. Once again, humanity is forced to rely on our favorite family of space smugglers to ensure that the system is not destroyed by fighting – or by the ancient alien technology that continues to threaten their peace. 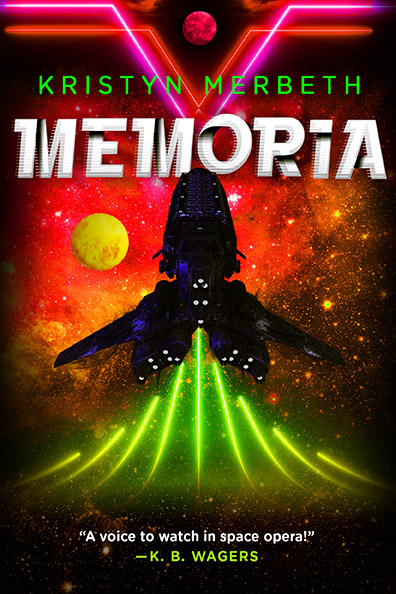 The Kaiser Family helped the Nova Vita system avoid a catastrophic multi-planet war, one that the Kaisers might have accidentally caused in the first place. In their wake, two planets have been left devastated by ancient alien technology.

Now, the Kaisers try to settle into their new lives as tenuous citizens of the serene water planet, Nibiru, but Scorpia Kaiser can never stay still. So, she takes another shady job. One that gives her a ship where spaceborn like her belong.

But while Scorpia is always moving forward, Corvus can’t seem to leave his life as a soldier behind. Every planet in the system is vying to strip his razed home planet Titan of its remaining resources, and tensions are high. The Kaisers will need to discover the truth behind what happened on Gaia and Titan, or Corvus will be forced again to fight in an unwinnable war – and this time, all of Nova Vita is at stake.

“Kristyn Merbeth has created a desperate, gritty world in her newest book Fortuna, an epic space opera about the lengths a family will go to survive not only each other, but a world out to kill them . . . . Merbeth is a voice to watch in space opera!”  — K. B. Wagers, author of There Before the Chaos

“The narrative is powered by a cast of deeply developed characters. Scorpia, in particular, is impressively multidimensional . . . . The nonstop action and varying levels of tension make this an unarguable page-turner.”  — Kirkus

“Merbeth’s multiple narrators and plotlines converge beautifully into a suspenseful tale of family. The characters are distinct and grounded, and each interaction is filled with purpose and emotion that brings all of them, regardless of differences, into the fray together. SF fans who have been waiting for a crime family spin on space opera will find nothing but joy in this whirlwind story.”  — Publishers Weekly

“Merbeth’s world building is fascinating-five human-settled planets, each distinct and littered with alien technology-but her multifaceted characters and their troubled relationships give this action-packed family drama its heart. A good readalike for Lois McMaster Bujold’s Miles Vorkosigan books, John Scalzi’s Collapsing Empire (2017), and for those who want a grittier version of Becky Chambers’ Wayfarers series.”  — Booklist

“This is an engaging start to a series that blends crime family drama with the sort of character-focused sci-fi that made Becky Chambers’ Wayfarers series an award-winning favorite.”   — B&N Reads

“It’s everything you could ask for in a space opera.”   — The Arcanist