THINGS ARE ABOUT TO GET SERIOUS FOR HARRY DRESDEN, CHICAGO’S ONLY PROFESSIONAL WIZARD, in the next entry in the No. 1 New York Times and No. 1 Sunday Times bestselling Dresden Files.

Orbit UK are thrilled to announce that BATTLE GROUND, book seventeen in the Dresden Files, hits shelves in September 2020 (UK|ANZ) and is available to preorder now. We’re sure you’re as excited as we are to read not one, but TWO Dresden Files novels in one year, but if you can’t wait that long, take a look at the awesome cover design for BATTLE GROUND and read on for a hint of what’s in store for Harry Dresden . . . 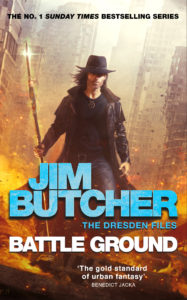 Harry has faced terrible odds before. He has a long history of fighting enemies above his weight class. The Red Court of vampires. The fallen angels of the Order of the Blackened Denarius. The Outsiders.

But this time it’s different. A being more powerful and dangerous on an order of magnitude beyond what the world has seen in a millennium is coming. And she’s bringing an army. The Last Titan has declared war on the city of Chicago, and has come to subjugate humanity, obliterating any who stand in her way.

Harry’s mission is simple but impossible: Save the city by killing a Titan. And the attempt will change Harry’s life, Chicago, and the mortal world forever.

‘The Dresden Files is my favourite series ever. I say that both as a writer and a reader . . . I don’t make statements like that casually’ Patrick Rothfuss, author of The Name of the Wind