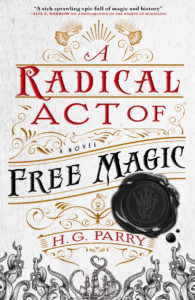 Enjoy history as you’ve never seen it before! A RADICAL ACT OF FREE MAGIC is the ambitious sequel to H. G. Parry’s A DECLARATION OF THE RIGHTS OF MAGICIANS (US | UK), which Publishers Weekly gave a starred review and called a “poetic tale of justice, liberation, and dark magic.” While you wait in anticipation for its July 2021 release, feast your eyes on the brilliant cover designed by Orbit’s own Lisa Marie Pompilio. 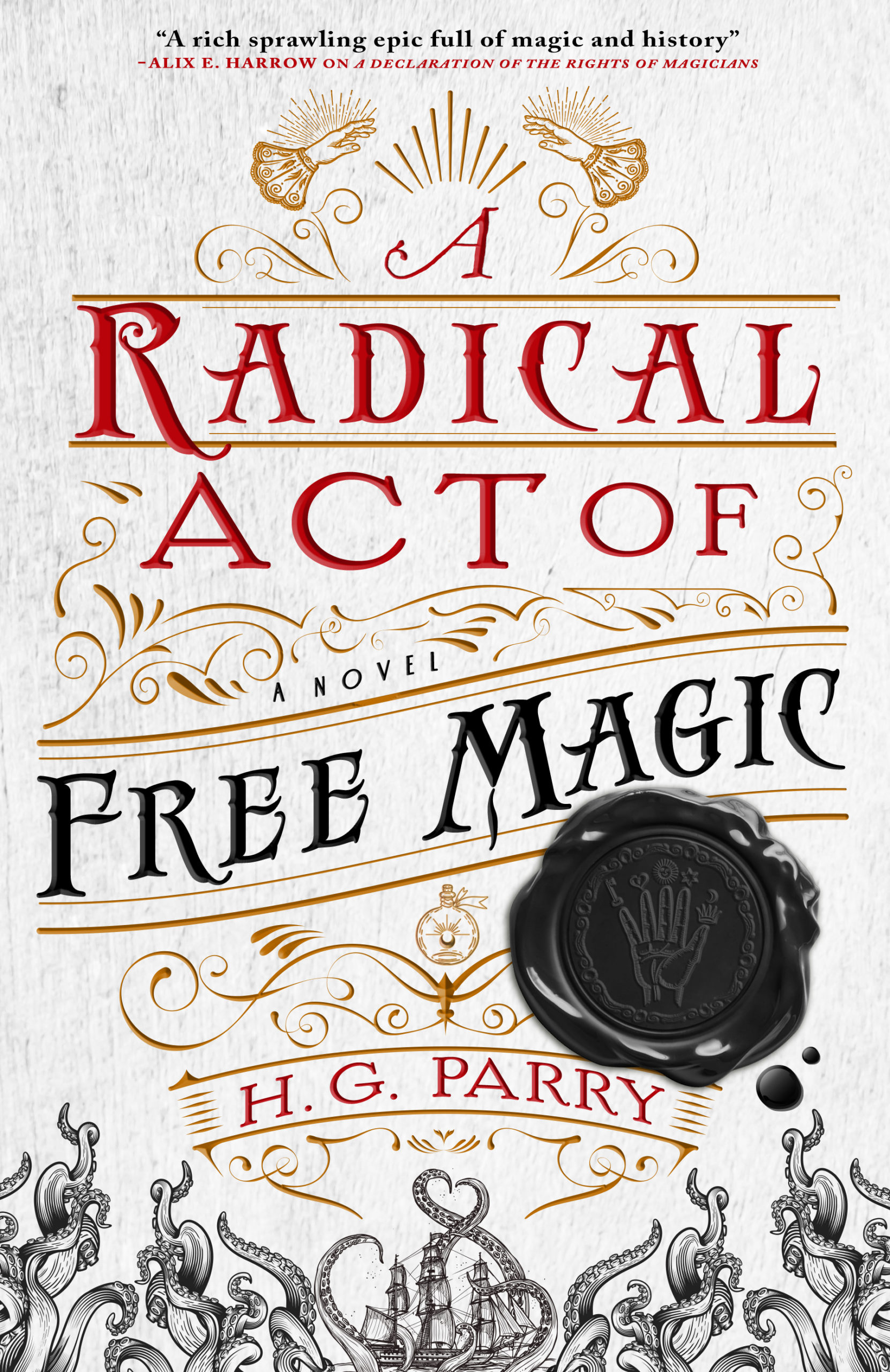 The Concord has been broken, and a war of magic engulfs the world.

In France, the brilliant young battle-mage Napoleon Bonaparte has summoned a kraken from the depths, and under his command the Army of the Dead have all but conquered Europe. Britain fights back, protected by the gulf of the channel and powerful fire-magic, but Wilberforce’s own battle to bring about free magic and abolition has met a dead end in the face of an increasingly fearful and repressive government. In Saint Domingue, Fina watches as Toussaint Louverture navigates these opposing forces to liberate the country.

But there is another, even darker war being fought beneath the surface: the first vampire war in hundreds of years. The enemy blood magician who orchestrated Robespierre’s downfall is using the Revolutionary Wars to bring about a return to dark magic to claim all of Europe. Across the world, only a few know of his existence and the choices they make will shape the new age of magic.

Praise for A DECLARATION OF THE RIGHTS OF MAGICIANS

“A rich, sprawling epic full of history and magic, Declaration is Jonathan Strange with international politics and vampires. I loved it.”  —Alix E. Harrow, author of The Ten Thousand Doors of January

“A witty, riveting historical fantasy…. Parry has a historian’s eye for period detail and weaves real figures from history-including Robespierre and Toussaint L’Ouverture-throughout her poetic tale of justice, liberation, and dark magic. This is a knockout.”  —Publishers Weekly (starred review)

“Impeccably researched and epically written, this novel is a stellar start to what promises to be a grand new fantasy series.”  —Booklist (starred review)

“I absolutely loved it. It held my attention from the beginning and throughout. It’s a beautiful tapestry of words, a combination of carefully observed and researched history and a well-thought-out and fascinating system of magic. An absolute delight to read; splendid and fluid, with beautiful and complex use of language.”  —Genevieve Cogman, author of The Invisible Library

“Magnificent…[turns] the part of history class you might have slept through into something new, exciting and deeply magical.” —BookPage

“Fans of Jonathan Strange & Mr Norrell will be enchanted by this sprawling epic of revolution and dark magic.”   —Locus

“It’s no simple task to wrangle fifteen years of tumult in a few hundred pages, but Parry manages it with a deft hand. Her alternate history puts a human face on the titans of the past, while weaving in supernatural elements that add a whole new dimension. I stayed up well past my bedtime to find out what happens next.” —Marie Brennan, author of the Memoirs of Lady Trent series

“Impressively intricate; fans of the magic-and-history of Jonathan Strange & Mr Norrell will be delighted.”  —Alexandra Rowland, author of A Conspiracy of Truths