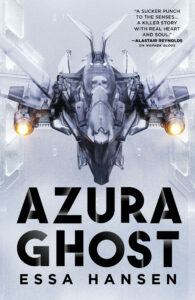 NOPHEK GLOSS  (US | UK) stunned readers with its widescreen adventure, boundless imagination, bubble universes, alien species, and warm characters. Alastair Reynolds called it “A sucker punch to the senses…. A killer story with real heart and soul.” Now, its sequel AZURA GHOST  has a cover just as breathtaking as the story itself. Keep an eye out for Azura Ghost publishing November 2021 from Orbit US and UK!

Following Nophek Gloss comes the second book in this imaginative new space opera trilogy by debut author Essa Hansen – an action-packed adventure perfect for fans of Star Wars, Children of Time and A Long Way to a Small Angry Planet.

​Caiden has been on the run for ten years with his unique starship in order to keep his adversary, Threi, imprisoned. But when an old friend he’d once thought dead reappears, he is lured into a game of cat and mouse with the one person whose powers rival Threi’s: Threi’s sister Abriss. Now with both siblings on the hunt for Caiden and his ship, Caiden must rescue his long-lost friend from their clutches and uncover the source of both his ship’s power and his own origins in order to stop Abriss’s plan to collapse the multiverse.