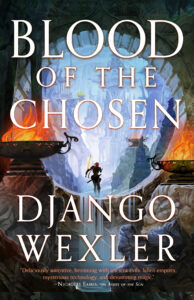 Set in the ruins of an ancient, technologically advanced civilization, Django Wexler’s epic fantasy about two siblings on opposite sides of a magical civil war is bursting with imagination, magic, and mystery. Book one, ASHES OF THE SUN garnered praise from authors like Anthony Ryan who called it “A fast-paced and highly entertaining ride through a compelling and original world” and Nicholas Eames who said it was “Fantasy at its finest”.

Book two won’t be out until October 2021, but in the meantime, you can pre-order and get a load of this epic cover for BLOOD OF THE CHOSEN! 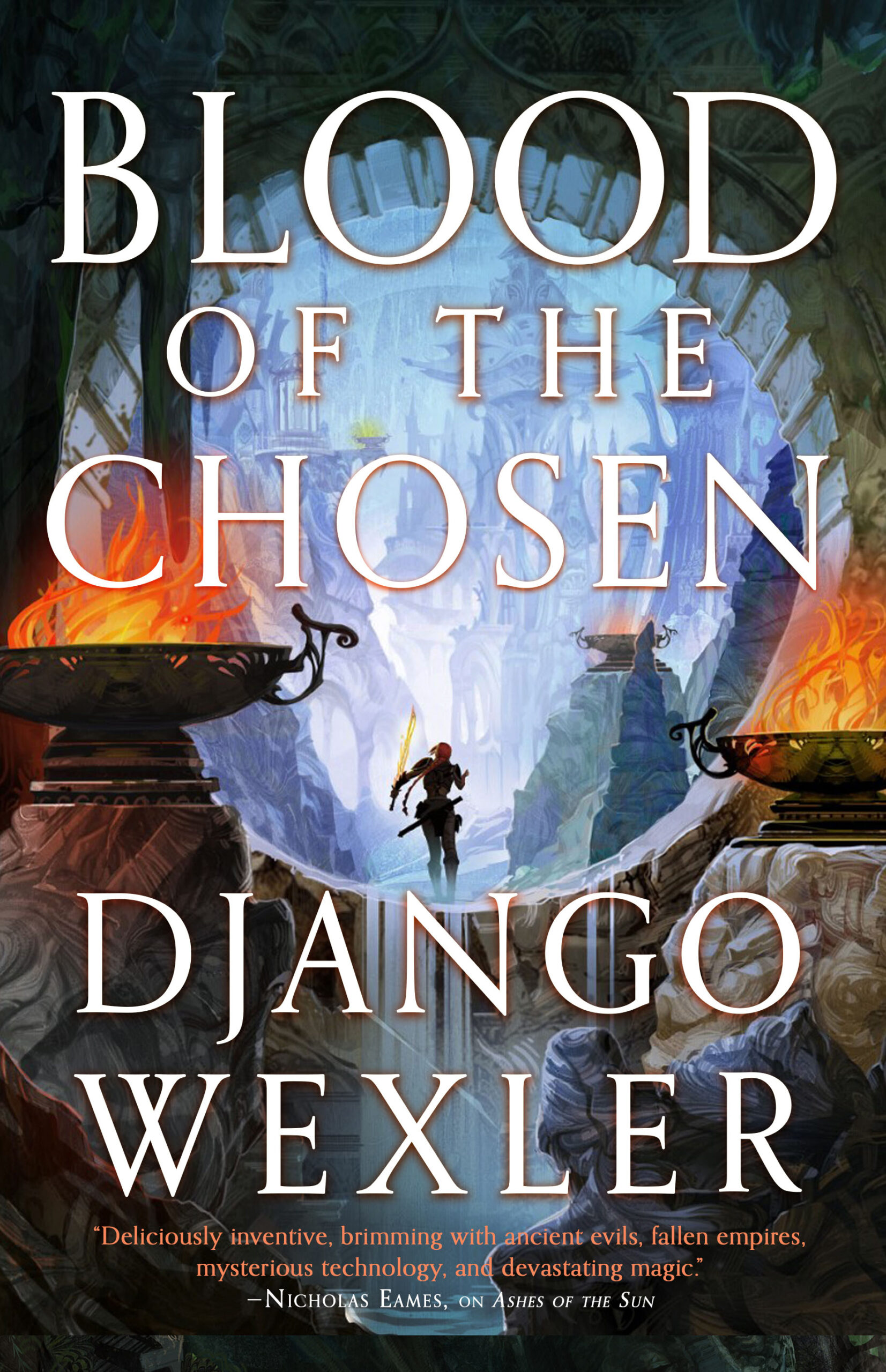 In the second book of Django Wexler’s epic fantasy trilogy about two siblings divided by magic and revolution, Gyre must travel across the Splinter Kingdoms to rally the rebels to his side, while his sister Maya uncovers the secrets of a powerful artifact that could change everything.

Gyre finally sees a way to overthrow the all-powerful Twilight Order. But he’ll have to gain the alliance of both the ghouls and the human rebels to the south to even stand a chance. And uniting them won’t be so simple.

His sister Maya is still a soldier of the Order. But after clashing with her brother, she isn’t so certain where her loyalties lie. Chasing the origins of a mysterious artifact to a long-lost library, she just might find the answers she’s looking for.

Praise for Ashes of the Sun:

“Ashes of the Sun is fantasy at its finest: deliciously inventive, brimming with ancient evils, fallen empires, mysterious technology, and devastating magic. Best of all, however, are its characters, each one crafted with deliberate care and developed in meaningful ways as their story unfolds.”―Nicholas Eames, author of Kings of the Wyld

“Magic, mutants, and mayhem abound in Django Wexler’s Ashes of the Sun, but there’s also plenty of brain food to be had in this tale of a post-catastrophe world suffering under the yoke of unbending authoritarian rule. A fast-paced and highly entertaining ride through a compelling and original world”―Anthony Ryan, NYT bestselling author of Blood Song

“Reminiscent of Final Fantasy, Masters of the Universe, and Moorcock’s The Jewel in the Skull, ASHES OF THE SUN is a science-fantasy adventure brimming with everything that is weird and wonderful about a world where magic and technology have fused in the fires of a fallen civilization.”―Jonathan French, author of The Grey Bastards

“Ashes of the Sun shows that Wexler is a master of high fantasy. His plotting and this post-apocalyptic setting will warp your mind!”―S. M. Stirling, NYT bestselling author

“Gorgeous writing, powerfully-drawn characters, and an exciting storyline!”―K.D. Edwards, Author of The Last Sun and The Hanged Man

“Exciting. Immersive. Epic. A perfect page turner and a phenomenal start to a new series.”―Peter Clines, author of The Fold and Ex-Heroes

“This is a book whose characters and world will stay with you well after the last page. Do yourself a favor and read it. Now.”―Douglas Hulick, author of Among Thieves and Sworn in Steel

“Ashes of the Sun uses awesome worldbuilding and complex, diverse characters to fuse the aesthetics of Star Wars with the brainfeel of Fullmetal Alchemist. Ancient secrets! Queer ladies! Snark! I demand a TV adaptation ASAP!”―Foz Meadows

“Ashes of the Sun is the best sort of fantasy. With fascinating characters, a richly realized world, and romances both steamy and adorable, Gyre and Maya are epic heroes you’ll want to know.”―Robyn Bennis, author of The Guns Above

“Ashes of the Sun brings to life an ancient world of magic broken by war. It’s a simmering post-apocalyptic fantasy that feels like the literary equivalent of a ticking time bomb. The book lights a fuse in its first few pages, slowly setting up stakes and a conflict big enough to break the bonds of love, loyalty, duty, and even family, all before the full burn of its last few chapters and the finale’s thunderous explosion.”―Evan Winter, author of The Rage of Dragons