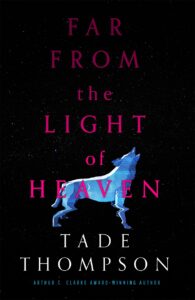 We’re thrilled to announce that Arthur C. Clarke winner Tade Thompson is making a triumphant return to science fiction with FAR FROM THE LIGHT OF HEAVEN (US | UK), an unforgettable vision of humanity’s future among the stars. If you can’t wait until October 2021, head on over to io9 to see the spectacular cover and read an exclusive excerpt.