We’re delighted to reveal the cover for BEYOND THE HALLOWED SKY, the first novel in the Lightspeed trilogy, from science fiction legend Ken MacLeod.

Humankind is on the precipice of a great discovery – the invention of faster-than-light travel – that will unlock a universe of new possibilities, and new dangers. BEYOND THE HALLOWED SKY hits shelves in November and you can pre-order your copy now! Read on for a taste of what’s in store. . . 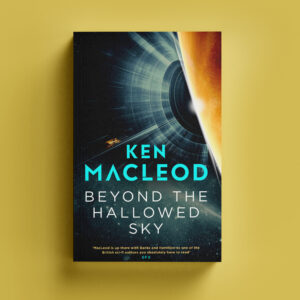 When a brilliant scientist gets a letter from herself about faster-than-light travel, she doesn’t know what to believe. The equations work, but her paper is discredited – and soon the criticism is more than scientific. Exiled by the establishment, she gets an offer to build her starship from an unlikely source. But in the heights of Venus and on a planet of another star, a secret is already being uncovered that will shake humanity to its foundations.

‘He is writing revolutionary science fiction. A nova has appeared in our sky’ Kim Stanley Robinson, on The Star Fraction

‘Prose as sleek and fast as the technology it describes . . . watch this man go global’ Peter F. Hamilton on The Star Fraction

‘Science fiction’s freshest new writer . . . MacLeod is a fiercely intelligent, prodigiously well-read author who manages to fill his books with big issues without weighing them down’ Salon