Life, Death, Light, and Darkness—all converge on the city of dusk…

We are so excited to share with you the stunning cover for The City of Dusk, Tara Sim’s adult fantasy debut—or, as the author puts it (quite perfectly), “the queer goth metal fantasy of her dreams.”

Set in a lush and intricate world of bone and shadow magic, of vengeful gods and defiant chosen ones, we knew this epic story needed an equally epic design. Orbit associate art director Lisa Marie Pompillio and illustrator Ben Zweifel certainly delivered! But don’t take our word for it. Take Tara’s, who says: “The first time I saw this cover, I gasped. From the foreshadowing design elements to the incredible depiction of Nexus, I couldn’t ask for a more perfect way to capture the book’s atmosphere.”

Feast your eyes on the gorgeous cover below, and prepare to enter the city of dusk next March by preordering the book here, and by following Tara Sim on twitter, @EachStarAWorld! 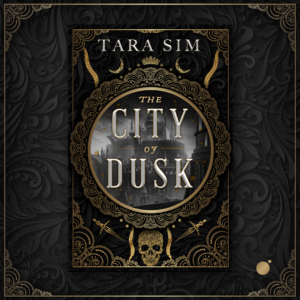 For every realm, there is a god.

For every god, there is an heir.

For every heir, there is a price.

Nexus was once a thriving and vibrant city. But 500 years ago, the gods withdrew their favor, sealing the four realms away from each other. And now, all the realms are dying.

Unwilling to stand by and watch the destruction, the four heirs to the divine power—Angelica, an elementalist with her eyes set on the throne; Risha, a necromancer fighting to keep the peace; Nik, a soldier who struggles to see the light; and Taesia, a shadow-wielding rogue with a reckless heart—will sacrifice everything to save the city.

But their rebellion will cost them dearly.