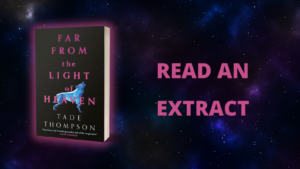 There is no need to know what no one will ask. Walking on gravel, boots crunching with each step, Shell doesn’t know if she is who she is because it’s what she wants or because it’s what her family expects of her. The desire for spaceflight has been omnipresent since she can remember, since she was three. Going to space, escaping the solar system, surfing wormhole relativity, none of these is any kind of frontier any more.

There will be no documentary about the life and times of Michelle Campion. She still wants to know, though. For herself. The isolation is getting to her, no doubt. No, not isolation, because she’s used to that from training. Isolation without progress is what bothers her, isolation without object. She thinks herself at the exact centre of the quarantine house courtyard. It’s like being in a prison yard for exercise, staggered hours so she doesn’t run into anyone. Prison without a sentence. They run tests on her blood and her tissues and she waits, day after day. She stops and breathes in the summer breeze, looks up to get the Florida sun on her face. She’s cut her hair short for the spaceflight. She toyed with the idea of shaving her head, but Max Galactix didn’t think this would be media friendly, whatever that means. Shell spots something and bends over. A weed, a small sprout, pushing its way up between the stones. It shouldn’t be there in the chemically treated ground, but here it is, implacable life. She feels an urge to pluck the fragile green thread, but she does not. She strokes the weed once and straightens up.

Humans in the cosmos are like errant weeds. Shell wonders what giants or gods stroke humanity when they slip between the stars. The wind changes and Shell smells food from the kitchen prepared for the ground staff and their families. Passengers and crew like Shell are already eating space food, like they’ve already left Earth. Around her are the living areas of the quarantine house. High- rises of glass and steel forming a rectangle around the courtyard. One thousand passengers waiting to board various space shuttles that will ferry them to the starship Ragtime. Shell, just out of training, along for the ride or experience, committed to ten years in space in Dreamstate, arrival and delivery of passengers to the colony Bloodroot, then ten further years on the ride back. She’ll be mid- forties when she returns.

Might as well be a passenger because the AI pilots and captains the ship. She is the first mate, a wholly ceremonial position which has never been needed in the history of interstellar spaceflight. She has overlearned everything to do with the Ragtime and the flight. At some predetermined point, it will allow her to take the con, for experience and with the AI metaphorically watching over her shoulder. She turns to her own building and leaves the courtyard. She feels no eyes on her but knows there must be people at the windows.