In case you missed it, readers were at the edge of their keyboards for Hannah Whitten’s cover reveal for FOR THE THRONE this past Wednesday on Twitter. FOR THE THRONE is the sequel to Hannah’s instant New York Times-bestselling debut For the Wolf. And, with the help of over 500 readers, we all got to witness the glory of her new cover! With design by Lisa Marie Pompilio, this cover is full of amazing details that hint at the story to come: twisting vines, a royal crown, and a deep sense of looming danger. We are so excited for you to read the book when it finally comes out in Summer 2022! In the meantime, you can pre-order your copy now: US | UK. And, if you haven’t had a chance to check out For the Wolf, order a copy here: US | UK! 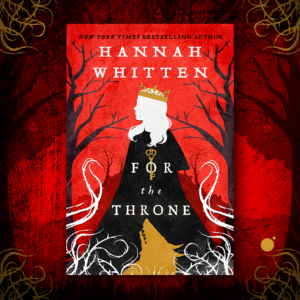 Red and the Wolf have finally contained the threat of the Old Kings but at a steep cost. Red’s beloved sister Neve, the First Daughter, is lost in the Shadowlands, an inverted kingdom where the vicious gods of legend have been trapped for centuries and the Old Kings have slowly been gaining control. But Neve has an ally–though it’s one she’d rather never have to speak to again–the rogue king Solmir.

Solmir wants to bring an end to the Shadowlands and he believes helping Neve may be the key to its destruction. But to do that, they will both have to journey across a dangerous landscape in order to find a mysterious Heart Tree, and finally claim the gods’ dark, twisted powers for themselves.