Today, we’re so excited to reveal the cover of THE BALLAD OF PERILOUS GRAVES, a spectacular new debut fantasy by author Alex Jennings!

This imaginative novel is a love letter to New Orleans. It is a story of perseverance and survival, of love and joy after the darkest storms, highlighting African American music, folk magic, and history. We hope you’re ready to fall in love with New Orleans as you’ve never seen it before!

While you must wait until June 2022 for THE BALLAD OF PERILOUS GRAVES to land in bookstores, here is the stunning cover, designed by Lisa Marie Pompilio, to whet your appetite. You can preorder the book now, and don’t forget to say hi to author Alex Jennings on Twitter! 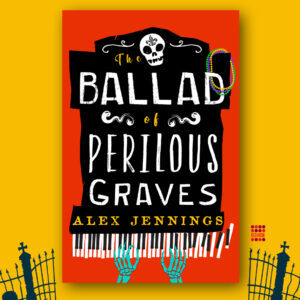 Nola is a city full of wonders. A place of sky trolleys and dead cabs, where haints dance the night away and Wise Women keep the order, and where songs walk, talk and keep the spirit of the city alive. To those from Away, Nola might seem strange. To failed magician, Perilous Graves, it’s simply home. Then the rhythm stutters.

Nine songs of power have escaped from the magical piano that maintains the city’s beat, and without them, Nola will fail. Unexpectedly, Perry and his sister, Brendy, are tasked with saving the city. But a storm is brewing, and the Haint of All Haints is awake. Even if they capture the songs, Nola’s time might be coming to an end.

Alex Jennings is a teacher, author, and performer living in New Orleans. His debut collection, Here I Come and Other Stories published in 2012, and his writing has appeared in Strange Horizon, Obsidian Lit, and in numerous anthologies. He also serves as MC and co-producer of Dogfish, a monthly literary readings series.