Can’t get enough of morally grey lesbians in possession of forbidden magic, who will stop at nothing to burn an empire to the ground but who secretly yearn for each other? Then we have a treat for you. Behold the gorgeous cover of THE OLEANDER SWORD, the sequel to Tasha Suri’s epic fantasy stunner THE JASMINE THRONE!

Coming in summer 2022, THE OLEANDER SWORD finds newly-crowned empress Malini and powerful priestess Priya grappling with their choice to remake an empire—and realizing that their love might not withstand the fight. You can add it on Goodreads here! And if you haven’t yet checked out THE JASMINE THRONE—named a Publishers Weekly Best Book of 2021 and hailed as a novel that will “reshape the landscape of epic fantasy for years to come” (Booklist, starred review)—be sure to do so now (US | UK). 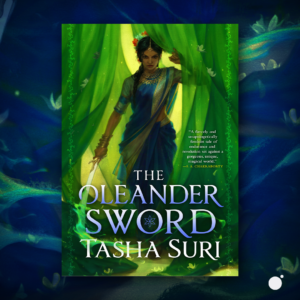 The prophecy of the nameless god—the words that declared her rightful empress of Parijatdvipa—has been Malini’s blessing and curse. She is determined to claim the crown that fate has offered. But even with the rage in her soul and a loyal army by her side, deposing her brother from the throne is going to be a brutal and bloody fight.

The power of the deathless waters flows through Priya’s blood. Thrice born priestess, Elder of Ahiranya, Priya’s dream is to see her country rid of the rot that plagues it: both Parijatdvipa’s poisonous rule, and the blooming sickness that is slowly spreading through all living things. But she doesn’t yet understand the truth of the magic she carries.

Their chosen paths once pulled them apart. But Malini and Priya’s hearts remain as entwined as their destinies. And they soon realize they must come together again if they wish to save their kingdom from those who would rather see it burn—no matter the cost.

Praise for The Jasmine Throne:

“Lush and stunning….Inspired by Indian epics, this sapphic fantasy will rip your heart out.” —BuzzFeed News

“A fierce, heart-wrenching exploration of the value and danger of love in a world of politics and power.” —Publishers Weekly (starred review)

“An intimate, complex, magical study of empire and the people caught in its bloody teeth. I loved it.” —Alix E. Harrow, Hugo award-winning author of The Once and Future Witches