The wheel of destiny is turning, and all will be caught under its weight! Return to the Zhaon empire one last time in THE BLOODY THRONE, the masterful conclusion to S. C. Emmett’s sweeping Hostage of Empire series. While you wait for THE BLOODY THRONE to land in bookstores in Spring 2022, you can feast your eyes on its gorgeous cover. 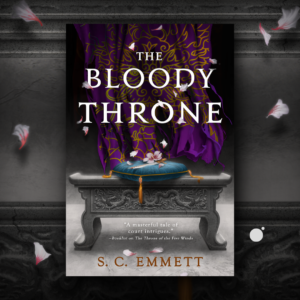 The great Zhaon empire is in turmoil. The emperor is dead, and the crown prince has fallen to hidden schemes, leaving his most dangerous brother to assume the throne. The imperial court is seething, and whispers of war grow to shouts.

The once-vanquished kingdom of Khir marches again to regain their honor, the savage Tabrak raid the borders after ravaging the South, and assassins lurk in the shadows seeking imperial favor.

Komor Yala, her own position uncertain, finds shelter in marriage to the cunning Third Prince. But there is little safety in Zhaon. Death and destruction mount as a blood-drenched summer ends. The winner will claim an empire—if it is not turned to smoking ruins first.

Praise for The Hostage of Empire series

“Intricate, elegant, and sharp as a blade―sweeping political fantasy at its finest.” ―Tasha Suri 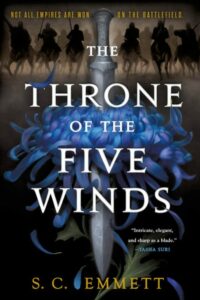 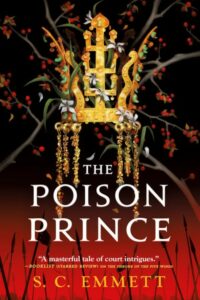 If you haven’t caught up on this epic tale of power, conquest, and deadly intrigue, make sure to check out The Throne of the Five Winds and The Poison Prince!