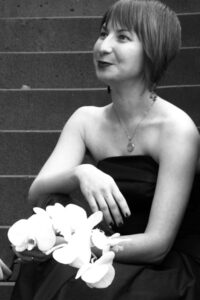 Orbit is thrilled to announce the acquisition of NOTORIOUS SORCERER, a vibrant and clever adventure fantasy by debut author Davinia Evans.

Perfect for readers of A Darker Shade of Magic and The Invisible Library, NOTORIOUS SORCERER invites you into a multi-planed world of wild alchemical magic, chaotic sword fighting street gangs, angry angels and malevolent harpies, and a bickering, bantering romance.

Keep an eye out for this delightful debut next fall and join us in welcoming Davinia to Orbit! You can find her on Twitter @cupiscent and learn more about her on her website, http://viscerate.com.

Since the city of Bezim was shaken half into the sea by a magical earthquake, the Inquisitors have policed alchemy with brutal efficiency. Nothing too powerful, too complicated, too much like real magic is allowed–and the careful science that’s left is kept too expensive for any but the rich and indolent to tinker with. Siyon Velo, a glorified errand boy scraping together lesson money from a little inter-planar fetch and carry, doesn’t qualify.

But when Siyon accidentally commits a public act of impossible magic, he’s catapulted into the limelight. Except the limelight is a bad place to be when the planes themselves start lurching out of alignment, threatening to send the rest of the city into the sea.

Now Siyon, a dockside brat who clawed his way up and proved himself on rooftops with saber in hand, might be Bezim’s only hope. Because if they don’t fix the cascading failures of magic in their plane, the Powers and their armies in the other three will do it for them.