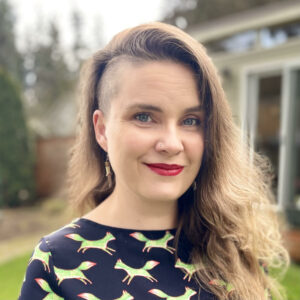 Enter a world where the history of a broken empire is sealed inside the mysterious Imperial Archives, where mages and librarians unearth the secrets of magical artifacts, historic tomes, and powerful relics. And what they uncover just may be the key to revealing a conspiracy that could topple the empire once and for all.

We’re thrilled to announce the acquisition of EMPIRE OF EXILES by Erin M. Evans. EMPIRE OF EXILES has everything you’re looking for in your next epic fantasy read – a stunning tale of revolution, wonderfully unique fantasy races and cultures, wise-cracking apprentices and fierce librarian-sorcerers, and a mystery around every corner of the lush world.

We can’t wait to bring you EMPIRE OF EXILES next year—in the meantime, please join us in welcoming Erin M. Evans to Orbit! Follow along for updates on Twitter at @erinmevans.

Twenty-seven years ago, a Duke with a grudge led a ruthless coup against the empire of Semilla, killing thousands. He failed. The Duke was executed, a terrifyingly powerful sorcerer was imprisoned, and an unwilling princess disappeared.

The empire moved on.

Now, when Quill, an apprentice scribe, arrives in the capital city, he believes he’s on a simple errand for another pompous noble: fetch ancient artifacts from the magical Imperial Archives. He’s always found his apprenticeship to be dull work. But these aren’t just any artifacts — these are the instruments of revolution, the banners under which the Duke lead his coup.

Just as the artifacts are unearthed, the city is shaken by a brutal murder that seems to have been caused by a weapon not seen since the days of rebellion.

Since Quill is the only reliable witness to the murder, and no one in power believes his story, he must join with a young mage, a seasoned archivist, and a disillusioned detective to find the truth of the attack. And what they uncover will be the key to saving the empire – or destroying it for good.