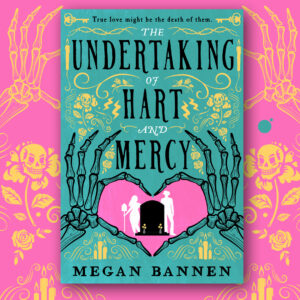 The Princess Bride meets You’ve Got Mail in THE UNDERTAKING OF HART AND MERCY by Megan Bannen, an enchantingly quirky enemies to lovers fantasy rom-com.

Hart Ralston is a marshal, tasked with patrolling the wasteland of Tanria, hunting for drudges. It’s an unforgiving job, and Hart’s got nothing but time to ponder his loneliness.

Mercy Birdsall never has a moment to herself. She’s been single-handedly keeping Birdsall & Son Undertakers afloat – despite definitely not being a son – in defiance of sullen jerks like Hart Ralston, who seems to have a gift for showing up right when her patience is thinnest.

After yet another exasperating run-in with Mercy, Hart finds himself penning a letter addressed simply to “A Friend”. Much to his surprise, an anonymous letter comes back in return, and a tentative friendship is born.

If only Hart knew he’s been baring his soul to the person who infuriates him most – Mercy. As the unlikely pen pals grow closer, so does the danger posed by the drudges. And suddenly their old animosity seems so small compared to what they might be able to do: end the drudges forever. But can their blossoming romance survive the fated discovery that their pen pals are their worst nightmares – each other?