From Andy Marino, a new star in horror fiction, comes IT RIDES A PALE HORSE: a terrifying novel of obsession, creation, and the shocking actions we’ll take to protect those we love, all set in a small town filled with dark secrets. 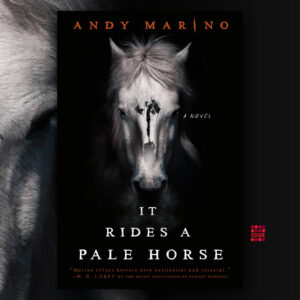 Peter Larkin—Lark to his friends—is a local hero in the small town of Wofford Falls. The one who went to the big city, became a famous sculptor, then returned home to settle down. He’s the kind of guy who becomes fast friends with almost anyone. His sister, Betsy, is even more gifted. And eccentric. Unlike Lark, she keeps to herself.

When Lark delivers his latest piece to a fabulously rich buyer, it seems like a regular transaction. Even being met at the gate of the sprawling, secluded estate by an intimidating security guard seems normal. Until the guard plays him a live feed: Betsy being abducted in real time.

Lark is informed that she’s safe for now, but her well‑being is entirely in his hands. He’s given a book. Do what the book says, and Betsy will go free.

It seems simple enough—an instruction manual for a sculpture. But as Lark begins to work he realizes: the book’s writer is unhinged. The sculpture is impossible. And his sister’s captors are not what they seem.

All the while, his town and those within it are changing. And the only way out is through.