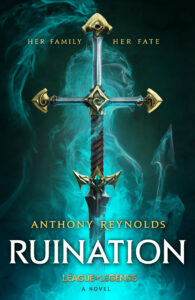 NEW YORK (March 21, 2022) – Orbit and Riot Games, the leading video game developer and publisher best known for League of Legends, have signed a major licensing deal to publish the first ever novel set in the League of Legends universe.

The novel, Ruination, written by Anthony Reynolds, Principal Writer at Riot Games, tells the story of Kalista, military general to King Viego, as she searches for a legendary realm that may have access to ancient magic—the only way to cure the poisoned Queen Isolde.

Ruination will be published in English in September 2022 by Orbit teams in the US and UK in print, ebook, and audio editions, and distributed internationally. It is also expected to be translated for all major international markets, with publication dates to be announced in the future.

“Stories play such an important role in exploring our world and champions in deep and meaningful ways,” said Ashley Maidy, Head of Consumer Products for Riot Games. “This is a foundational story for Runeterra, and will shed new light on the events that shape some of its most pivotal characters. We are thrilled that Orbit will be bringing this to life for our fans.”

Senior Vice President and Publisher of Orbit US, Tim Holman, said of the deal, “We are thrilled to be publishing the first novel set in the League of Legends universe. Our goal is to publish stories that will excite not just the millions of League of Legends players but anyone who loves epic adventures set in fantastical worlds. Working with the Rioters has been an amazing experience, and I believe that together we can build a phenomenal publishing program.”

Orbit UK Publisher Anna Jackson said, “League of Legends has taken the world by storm, and we’re so excited to be working with the highly innovative team behind this global sensation. The universe they’ve created is so rich with detail, and we can’t wait to help bring it to life in new ways.”

Orbit US acquiring editor Bradley Englert said, “I’ve been playing League of Legends for more than ten years, and I’m beyond thrilled to be able to join Riot in publishing their first novel set within the League universe. The characters are unforgettable, and the depth of the world is immense. As an epic fantasy editor, it’s an absolute pleasure to be working with a team like Riot who have a real passion for telling remarkable stories.”

Riot Games was founded in 2006 to change the way video games are developed, published, and supported for players. In 2009, Riot released its debut title, League of Legends, to worldwide acclaim. League has gone on to be the most-played PC game in the world and a key driver of the explosive growth of esports.

Orbit in the US is a division of Hachette Book Group, comprising the Orbit and Redhook imprints. Launched in 2007, the Orbit imprint has established itself as one of the market-leading SFF imprints in the US, and the fastest-growing imprint in the field. Orbit US authors include New York Times bestsellers Joe Abercrombie, Iain M. Banks, James S.A. Corey, Alix E. Harrow, N.K. Jemisin, Ann Leckie, Kim Stanley Robinson, Andrzej Sapkowski, Brent Weeks, and Hannah Whitten.

Hachette Book Group is a leading trade publisher based in New York and a division of Hachette Livre (a Lagardère company), the third-largest trade and educational publisher in the world. HBG is made up of eight publishing groups: Grand Central Publishing; Hachette Audio; Little, Brown and Company; Little, Brown Books for Young Readers; Orbit; Perseus Books; and Workman Publishing.

Hachette UK is the UK’s second largest publishing group, with 10 autonomous publishing divisions and over 50 imprints with a rich and diverse history. We are also the market leader in e-books and publish a range of bestsellers in audio format, the fastest growing part of our business. Our award-winning adult publishing divisions are Orion, Little, Brown, John Murray Press, Hodder & Stoughton, Headline, Quercus, Bookouture and Octopus. Hachette Children’s Group publishes a diverse range of books for children of all ages and Hodder Education is a market leader in resources for both primary and secondary schools.