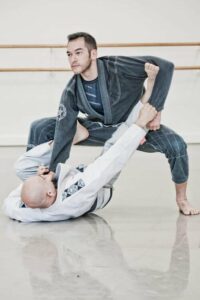 We are ecstatic to announce that we’ve acquired debut author Alexander Darwin’s action-packed, science fiction trilogy, The Combat Codes. The first book in the trilogy, The Combat Codes, is set in a world where the fate of nations is determined by battle-hardened warriors who are trained to represent their nations’ interests in brutal hand-to-hand single combat.

Murray Pearson was once a famed warrior until he suffered a loss that crippled his nation — but now he’s on the hunt to find and train the next champion.

In underground and ruthless combat rings, an orphaned boy called Cego is making a name for himself. Murray believes Cego has what it takes to make it in the world’s most prestigious combat academy – but Cego must fight his way out of the underground first.

If you’re a fan of martial arts, school stories, redemption arcs, and incredibly immersive science fiction, we can promise that you’re going to find a lot to love in The Combat Codes.

Here are a few words from Alexander about what inspired him to write his debut trilogy:

I’ve practiced and taught martial arts for most of my life, and I’ve also always been a massive sci-fi / fantasy fan; I wrote the Combat Codes to blend these two passions. At its heart though, the Combat Codes is the story of finding one’s light and path in a world that can be bleak and brutal, the clash of new and old cultures, and how friends are a necessity even when standing alone in the ring.

The Combat Codes certainly is centered around fighting, but not just the action itself. I wanted to create a world where the society and politics are organized around single combat, and the fighters are constantly caught between duty and honor. I’m so excited to get this story and its cast of characters out to readers around the world!

Look out for The Combat Codes in 2023. In the meantime, please join us in welcoming Alexander! You can find him on Twitter or Instagram as @combatcodes.