We’re thrilled to reveal the stunning cover for The Stars Undying by Emery Robin, a spectacular space opera debut perfect for readers of Ann Leckie’s Ancillary Justice and Arkady Martine’s A Memory Called Empire, inspired by the lives and loves of Cleopatra and Julius Caesar. Coming November 2022. Pre-order your copy now: US | UK link to come. 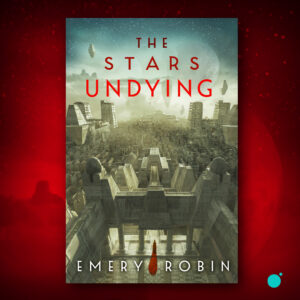 Princess Altagracia has lost everything. After a bloody civil war, her twin sister has claimed not just the crown of their planet Szayet but the Pearl of its prophecy, a computer that contains the immortal soul of Szayet’s god. Stripped of her birthright, Gracia flees the planet—just as Matheus Ceirran, Commander of the interstellar Empire of Ceiao, arrives in deadly pursuit with his volatile lieutenant, Anita. When Gracia and Ceirran’s paths collide, Gracia sees an opportunity to win back her planet, her god, and her throne…if she can win the Commander and his right-hand officer over first.

But talking her way into Ceirran’s good graces, and his bed, is only the beginning. Dealing with the most powerful man in the galaxy is almost as dangerous as war, and Gracia is quickly torn between an alliance that fast becomes more than political and the wishes of the god—or machine—that whispers in her ear. For Szayet’s sake, and her own, Gracia will need to become more than a princess with a silver tongue. She will have to become a queen as history has never seen before—even if it breaks an empire.