We’re thrilled to reveal the cover of the UK edition of THE DAUGHTERS OF IZDIHAR by Hadeer Elsbai, a powerful debut fantasy set in an Egyptian-inspired world featuring breathtaking elemental magic and sapphic romance.

Feast your eyes on this beautiful cover, designed by Ella Garrett at Little, Brown Book Group, and read on for a taste of what’s in store. . . 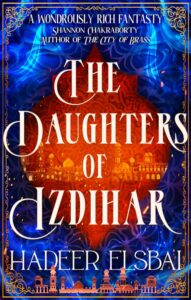 Praise for The Daughters of Izdihar:

‘Hadeer Elsbai has written a powerful story of sisterhood, love, and struggle within a rich, vibrant world with complicated characters that leap from the page to smash the patriarchy!’ P. Djèlí Clark, author of A Master of Djinn

‘A wondrously rich fantasy. . . a debut not to be missed’ Shannon Chakraborty, author of The City of Brass

‘Action-packed, magic-filled, and led by two fierce, vividly-rendered women, The Daughters of Izdihar is a compelling and empowering debut’ Ava Reid, author of Juniper and Thorn

‘A thrilling tale of two women’s fight for rights in their patriarchal society, peppered with elemental magic, politics, and a relentless desire for that which is wrongly forbidden.’ Andrea Stewart, author of The Bone Shard Daughter

You can pre-order The Daughters of Izdihar now!