The Combat Codes (US | UK) is the first book in a debut, action-packed and character-driven science fiction trilogy set in a far future world where the fate of nations is determined by battle-hardened warriors who are trained to compete in brutal single combat. Take a look at the stunning cover below and pick up a copy when it arrives in bookstores June 2023. 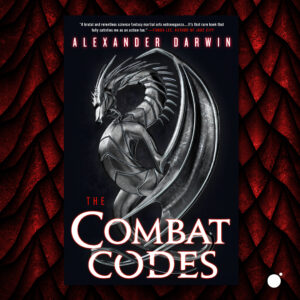 Hundreds of years ago on a planet once ravaged by war, the nations swore an armistice never to use weapons of mass destruction again. Today, battle-hardened warriors known as Grievar Knights train to represent their nations’ interests in brutal hand-to-hand combat.

Murray Pearson was once a famed Knight until he suffered a loss that crippled his nation—but now he’s on the hunt to find and train the next champion.

In underground and ruthless combat rings, an orphaned boy called Cego is making a name for himself. Murray believes Cego has what it takes to make it in the world’s most prestigious combat academy—but Cego has to fight his way out of the underground first.