The Phoenix King by Aparna Verma is first in a debut fantasy trilogy, coming August 2023. In a kingdom where fire is magic and the dunes hide secrets, an assassin and a princess face an ancient prophecy that would burn the world to ash. Take a look at the stunning cover below. 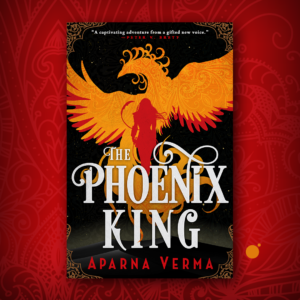 The first in a sensational, action-packed debut epic fantasy trilogy in which an assassin and a princess navigate a world teetering on the edge of war and contend with an ancient prophecy that could remake the world.

Yassen Knight was the Arohassin’s most notorious assassin until a horrible accident. Now, he’s hunted by the authorities and his former employer, both of whom want him dead. But when he seeks refuge with an old friend, he’s offered an irresistible deal: defend the heir of Ravence from the Arohassin, and earn his freedom once and for all.

Elena Ravence is preparing to ascend the throne. Trained since birth in statecraft, warfare, and the desert ways, Elena knows she is ready. She only lacks one thing: the ability to hold Fire, the magic that is meant to run in her family’s blood. And with her coronation only weeks away, she must learn quickly or lose her kingdom.

Leo Ravence is not ready to give up the crown. There’s still too much work to be done, too many battles to be won. But when an ancient prophecy threatens to undo his lifetime of work, Leo wages war on the heavens themselves to protect his legacy.