In case you missed it, meet the cover of The Faithless (US | UK), the sequel to The Unbroken by C.L. Clark! You can take a closer look at the cover and read an exclusive first chapter excerpt here at io9. This next volume in The Magic of the Lost trilogy is coming March 2023. Read further for a synopsis and a cover comparison! 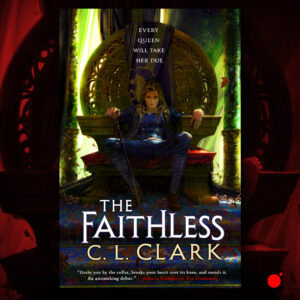 In the second installment of C.L. Clark’s Magic of the Lost trilogy, soldier Touraine and princess Luca must return to Balladaire to reclaim Luca’s throne and to face the consequences of dismantling an empire.

The rebels have won, and the empire is withdrawing from Qazal. But undoing the tangled web that binds the two nations will not be easy, and Touraine and Luca will face their greatest challenge yet.

Luca needs to oust her uncle from the Balladairan throne once and for all and take her rightful place as Queen. But he won’t let go of power so easily. When he calls for a “Trial of Competence” and Luca’s allies start disappearing from her side, she will need to find a way to prove her might. And she knows someone who can help…

Touraine has found a home in the newly free country of Qazal. But she soon realizes that leading a country and leading a revolution are two very different tasks. And, even more importantly, if Luca’s uncle doesn’t ratify the treaty, the Qazali could end up right back where they started.

Together, the two women will have to come overcome their enemies, their history, and their heartbreak in order to find a way to secure Luca’s power and Touraine’s freedom. 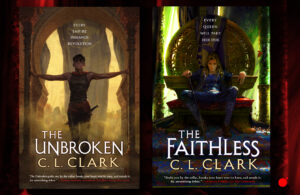