The Jasad Heir (US | UK) is Sara Hashem’s debut fantasy coming July 2023. Take a look at the stunning cover and catch the synopsis down below! You can also check out an exclusive first chapter excerpt over at io9. 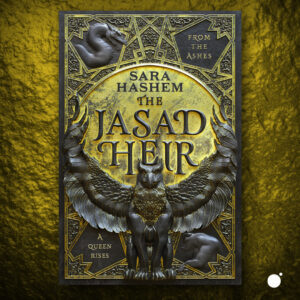 In this Egyptian-inspired debut fantasy, a fugitive queen strikes a deadly bargain with her greatest enemy and finds herself embroiled in a complex game that could resurrect her scorched kingdom or leave it in ashes forever.

At ten years old, the Heir of Jasad fled a massacre that takes her entire family. At fifteen, she buried her first body. At twenty, the clock is ticking on Sylvia’s third attempt at home. Nizahl’s armies have laid waste to Jasad and banned magic across the four remaining kingdoms. Fortunately, Sylvia’s magic is as good at playing dead as she is.

When the Nizahl Heir tracks a group of Jasadis to Sylvia’s village, the quiet life she’s crafted unravels. Calculating and cold, Arin’s tactical brilliance is surpassed only by his hatred for magic. When a mistake exposes Sylvia’s magic, Arin offers her an escape: compete as Nizahl’s Champion in the Alcalah tournament and win immunity from persecution.

To win the deadly Alcalah, Sylvia must work with Arin to free her trapped magic, all while staying a step ahead of his efforts to uncover her identity. But as the two grow closer, Sylvia realizes winning her freedom means destroying any chance of reuniting Jasad under her banner. The scorched kingdom is rising again, and Sylvia will have to choose between the life she’s earned and the one she left behind.