An Extract from DEATH MOST DEFINITE

Read on below for an excerpt from Trent Jamieson’s Death Most Definite.

Part One
THE SCHISM 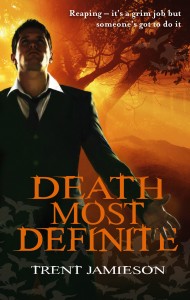 I know something’s wrong the moment I see the dead girl standing in the Wintergarden food court.

She shouldn’t be here. Or I shouldn’t. But no one else is working this. I’d sense them if they were. My phone’s hardly helpful. There are no calls from Number Four, and that’s a serious worry. I should have had a heads-up about this: a missed call, a text, or a new schedule. But there’s nothing. Even a Stirrer would be less peculiar than what I have before me.

Christ, all I want is my coffee and a burger.

Then our eyes meet and I’m not hungry anymore.

A whole food court’s worth of shoppers swarm between us, but from that instant of eye contact, it’s just me and her, and that indefinable something. A bit of deja vu. A bit of lightning. Her eyes burn into mine, and there’s a gentle, mocking curl to her lips that is gorgeous; it hits me in the chest.

This shouldn’t be. The dead don’t seek you out unless there is no one (or no thing) working their case: and that just doesn’t happen. Not these days. And certainly not in the heart of Brisbane’s CBD.

She shouldn’t be here.

This isn’t my gig. This most definitely will not end well. The girl is dead; our relationship has to be strictly professional.

She has serious style.

I’m not sure I can pinpoint what it is, but it’s there, and it’s unique. The dead project an image of themselves, normally in something comfortable like a tracksuit, or jeans and a shirt. But this girl, her hair shoulder length with a ragged cut, is in a black, long-sleeved blouse, and a skirt, also black. Her legs are sheathed in black stockings. She’s into silver jewellery, and what I assume are ironic brooches of Disney characters. Yeah, serious style, and a strong self-image.

Oh, her eyes. They’re remarkable, green, but flecked with grey. And those eyes are wide, because she’s dead –
newly dead – and I don’t think she’s come to terms with that yet. Takes a while: sometimes it takes a long while. I yank pale ear buds from my ears, releasing a tinny splash of ‘London Calling’ into the air around me.

The dead girl, her skin glowing with a bluish pallor, comes towards me, and the crowd between us parts swiftly and unconsciously. They may not be able to see her but they can feel her, even if it lacks the intensity of my own experience. Electricity crackles up my spine – and something else, something bleak and looming like a premonition.

She’s so close now I could touch her. My heart’s accelerating, even before she opens her mouth, which I’ve already decided, ridiculously, impossibly, that I want to kiss. I can’t make up my mind whether that means I’m exceedingly shallow or prescient. I don’t know what I’m thinking because this is such unfamiliar territory: total here-be-dragons kind of stuff.

She blinks that dead person blink, looks at me as though I’m some puzzle to be solved. Doesn’t she realise it’s the other way around? She blinks again, and whispers in my ear, ‘Run.’

And then someone starts shooting at me.

Not what I was expecting.

Bullets crack into the nearest marble-topped tables. One. Two. Three. Shards of stone sting my cheek.

The food court surges with desperate motion. People scream, throwing themselves to the ground, scrambling for cover. But not me. She said run, and I run: zigging and zagging. Bent down, because I’m tall, easily a head taller than most of the people here, and far more than that now that the majority are on the floor. The shooter’s after me; well, that’s how I’m taking it. Lying down is only going to give them a motionless target.

Now, I’m in OK shape. I’m running, and a gun at your back gives you a good head of steam. Hell, I’m sprinting, hurdling tables, my long legs knocking lunches flying, my hands sticky with someone’s spilt Coke. The dead girl’s keeping up in that effortless way dead people have: skimming like a drop of water over a glowing hot plate.

We’re out of the food court and down Elizabeth Street. In the open, traffic rumbling past, the Brisbane sun a hard light overhead. The dead girl’s still here with me, throwing glances over her shoulder. Where the light hits her she’s almost translucent. Sunlight and shadow keep revealing and concealing at random; a hand, the edge of a cheekbone, the curve of a calf.

The gunshots coming from inside haven’t disturbed anyone’s consciousness out here.

Shootings aren’t exactly a common event in Brisbane. They happen, but not often enough for people to react as you might expect. All they suspect is that someone needs to service their car more regularly, and that there’s a lanky bearded guy, possibly late for something, his jacket bunched into one fist, running like a madman down Elizabeth Street. I turn left into Edward, the nearest intersecting street, and then left again into the pedestrian-crammed space of Queen Street Mall.

I slow down in the crowded walkway panting and moving with the flow of people; trying to appear casual. I realise that my phone’s been ringing. I look at it, at arm’s length, like the monkey holding the bone in 2001: A Space Odyssey. All I’ve got on the screen is Missed Call, and Private Number. Probably someone from the local DVD shop calling to tell me I have an overdue rental, which, come to think of it, I do – I always do.

‘No shit!’ I’m thinking about overdue DVDs, which is crazy. I’m thinking about kissing her, which is crazier still, and impossible. I haven’t kissed anyone in a long time. If I smoked this would be the time to light up, look into the middle distance and say something like: ‘I’ve seen trouble, but in the Wintergarden, on a Tuesday at lunchtime, c’mon!’ But if I smoked I’d be even more out of breath and gasping out questions instead, and there’s some (well, most) types of cool that I just can’t pull off.

So I don’t say anything. I wipe my Coke-sticky hands on my tie, admiring all that je ne sais quoi stuff she’s got going on and feeling as guilty as all hell about it, because she’s dead and I’m being so unprofessional. At least no one else was hurt in the food court: I’d feel it otherwise. Things aren’t that out of whack. The sound of sirens builds in the distant streets. I can hear them, even above my pounding heart.

‘This is so hard.’ Her face is the picture of frustration. ‘I didn’t realise it would be so hard. There’s a lot you need –’ She flickers like her signal’s hit static, and that’s a bad sign: who knows where she could end up. ‘If you could get in –’

I reach towards her. Stupid, yeah, but I want to comfort her. She looks so pained. But she pulls back, as though she knows what would happen if I touch her. She shouldn’t be acting this way. She’s dead; she shouldn’t care. If anything, she should want the opposite. She flickers again, swells and contracts, grows snowy. Whatever there is of her here is fracturing.

Need to? I don’t exactly know what I need. But it doesn’t matter because she’s gone, and I’m yelling at nothing. And I didn’t pomp her.