1. It’s the Fiftieth Anniversary of the launch of Sputnik, the Soviet satellite that lit the fuse on the Space Race and captured the hearts and minds of millions of young SF fans around the world (and as an aside, if any of you haven’t seen October Sky or read Homer Hickam’s extraordinary memoir, Rocket Boys, upon which it was based, do so immediately!).

2. It’s publication day for Daniel Abraham’s extraordinary Orbit debut, The Long Price. Comprising A Shadow in Summer and A Betrayal in Winter (published separately in the US), The Long Price is an original and elegant debut that has already garnered effusive praise from some giants of the genre:

‘Intricate, elegant, and almost hypnotically told, this tale of gods held captive will hold you captive, too’ — Connie Willis

Don’t know about you, but I’d take notice of these folks — I mean, they’ve only got about two dozen Hugos and Nebulas between them! I’d also get used to seeing Daniel Abraham’s name on award short lists — as George R.R. Martin notes, he’s a major new voice in fantasy fiction.

Following on a fantastic review and interview, The Book Swede is now giving away six copies of Karen Miller’s The Awakened Mage.

Be sure to visit for a chance to win one of the most popular books this year!

Congratulations to Karen Miller, whose second novel, The Awakened Mage (out this week), has charged straight to the top of the SFF paperback bestseller charts in the UK. In the US, both The Innocent Mage and The Awakened Mage are among the Top 5 mass-market fantasy bestsellers. Karen is very happy — and so are we!

Over at BN.com, Paul Di Filippo writes about the history of SF dystopias, and says of The Electric Church:

Somers’ strategy of blending Invasion of the Body Snatchers with allusions to contemporary cults coats this profane, kickass thriller with a veneer of social commentary reminiscent of some Galaxy-era novel reinterpreted by Warren Ellis.

Jennifer Rardin talks about her urban fantasy debut Once Bitten, Twice Shy over at Scifichick.com (The scifichick.com review is here.)

And Jeff Somers appears as part of Largehearted Boy’s “Book Notes” series with a soundtrack to The Electric Church.

Iron Maiden, Two Minutes to Midnight
The greatest. Song. Ever. Bar none. You can write action sequences to this endless dual-lead-guitar gem until your hands fall off. Fun fact: Every movie fight sequence ever filmed can be synchronized to this song. Go ahead, try it. You might need to drink a little first. It seems to help.

Over at the Unfiction message board a team of players just solved the last puzzle on The Electric Church Website: unlocking the story hidden in the site, saving Ty’s old friend, and learning the secret ingredient in author Jeff Somers’ homemade moonshine. If you were one of the players at Unfiction, drop us a line at the email listed at the finish line, we’d love to hear from you. And thanks to everyone for playing!

If you haven’t poked around the site, you can still play the game – and if you get stuck, Unfiction provides a lively walkthrough.

This is our first attempt at building an ARG for a book promotion, and it was a lot of fun to put together. We’d love to know what you thought – what we did right, what we did wrong, and how we can improve next time.

For posterity, (and any players who need to find the penultimate password ) the blogad is here.

Scifichick has just posted a fabulous review for Once Bitten, Twice Shy, out from Orbit next month in the US and the UK.

“Blending some of my favorite elements: fantasy, espionage, mystery, action, and just a touch of romance, makes a recipe for one extremely entertaining story.” more…

The love for Jaz Parks doesn’t stop there, though. Be sure to check out Living Read Girl, who calls Jennifer Rardin “a new scream queen on the scene.”

And check out Jennifer’s blog at www.jenniferrardin.com

There was a terrific double review in The Telegraph over the weekend, looking at Charles Stross’ latest books, The Atrocity Archives and The Jennifer Morgue. Charlie is described as “British science fiction’s hot new writer, having turned out half a dozen novels in what seems like the last five minutes . . . Tremendously good, geeky fun.”

Bookgasm digs The Electric Church in a big way. Reviewer Bruce Grossman calls the book “an action movie for the literary set”, but suggests that we got the blurb wrong on the galley.

(Our crack researchers find that The Dirty Dozen’s Jim Brown appeared in Mars Attacks with Pam Grier, who starred in Jackie Brown which connects in about a dozen ways to Kill Bill, so we’re calling it square.)

But Bruce gets to the heart of what we all find so exciting about The Electric Church — it’s smart, fast-paced, SF that evokes Bladerunner plus your favorite action movie.

Over at Scifichick, Angela calls the book “ a dark, intense and suspenseful novel that had me on the edge of my seat.”

Pat’s Fantasy Hotlist, chatted with Jeff about the book and the publishing process.

And if you haven’t visited the-electric-church.com yet, now’s a good time. Enterprising readers around the web have already started unraveling the mysteries of the site, so if you get stuck, some clever googling should yield some hints. 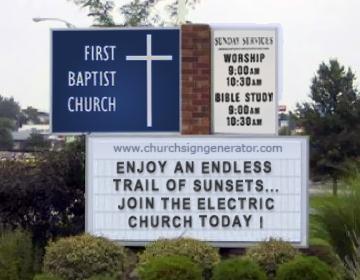 It is a great sadness to report the news that Robert Jordan, author of the Wheel of Time series, passed away yesterday, 16 September. He will be greatly missed by his family, friends, and everyone who knew him personally and through his books. The news was first posted on his blog at www.dragonmount.com.