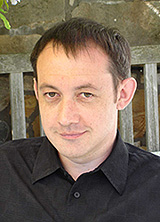 Brain Ruckley talks with Aiden Moher at A Dribble of Ink. It’s a wide-ranging discussion, covering Winterbirth, Bloodheir (the second novel in the trilogy, out next spring from Orbit) as well as the trauma of seeing a favorite book adapted to the screen:

“When I saw that trailer it was a bit like someone kicking in the door of your house, making straight for the cupboard where you keep the best-loved toys of your early years and beating on them with a sledgehammer.”

Brian blogs at www.brianruckley.com, and you can read an excerpt of the book here.

Philip has been pretty busy recently, what with checking the proofs for Debatable Space and finishing the first draft of his next book for Orbit — it’s no wonder the strain is starting to tell . . . But seriously, Philip has been doing a huge amount of work in recent months for his new radio play for Radio 4, and you can catch this tonight from 9-10pm.

The play is entitled Breaking Point and is an insightful and powerful exploration into psychological manipulation, and how to ‘break’ people in interrogation. We see the story from an unusual perspective as we follow Jon Starkey, undergoing training to become a British Army interrogator. As the drama unfolds, we see the effects on him and his family as he joins the ‘war against terror’. Philip talks about the play on his blog and you can also find out more on Radio 4’s site.

If you miss the play on Friday, you can listen for a further week after broadcast, courtesy of Radio 4’s ‘listen again’ facility. Philip has also written an interesting piece on the making and recording of the play, an engaging read.

Radio 4 describes its Friday plays as “strong stories that reflect the world: entertaining, emotionally engaging and challenging” and Breaking Point will certainly be all of these things.

Here’s a question: whose next SF novel features spaceships with the following names?

Now We Try It My Way

Don’t Try This At Home

You’ll Clean That Up Before You Leave

Without doubt one of the most highly anticipated SF novels to be published next year, Matter is the new novel from Iain M. Banks, the UK’s bestselling SF author. It’s a Culture novel — the first for 8 years — and Iain has just delivered the final manuscript. And I’ve just read it. And . . . WOW!!! (that’s a technical publishing term). Being a Culture novel, we’ve also got a whole heap of new Culture ship names to look forward to. My favourite today is Don’t Try This At Home. We’re scheduled to publish Matter in the UK and the US in February next year, and here’s a sneak peek of the cover: 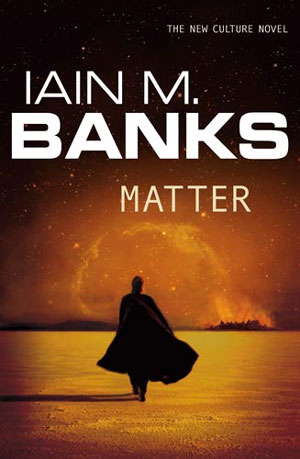 The award will be presented at Fantasycon in Nottingham this September, which Mike will be attending — along with fellow Orbit author Terry Brooks, who is one of the Guests of Honour.

You can read an extract of The Devil You Know here.

Congratulations to all the shortlisted authors, and our best wishes to Mike — everyone at Orbit is hoping for a well-deserved win for Felix Castor’s first outing.

Glenda Larke’s latest book, Heart of the Mirage, has been getting some wonderful reviews of late:

This month’s Starburst gives it a five star rating and says “those looking for a ‘sense-of-wonder’ fix need look no further. Larke doesn’t conform to the cookie-cutter school of fantasy and has a talent for world building and a fondness for unstable landscapes . . . It’s also great fun”.

Graeme’s Fantasy Book Review thinks: “It is nice sometimes to break out of the typical medieval Fantasy City and go somewhere different. Larke accomplishes this by setting her tale in the equivalent of Ancient Rome and the deserts of Africa and decorates the proceedings with some stunning imagery in the process.”

And The Bookbag calls it: “highly enjoyable, this book’s got love, betrayal, skullduggery, espionage, adventure, magic, heartbreak and plenty more besides.”

Interested in taking a peek at the finest (and possibly only) book this year to feature heartbreak and skullduggery? You can check out a sample of the first chapter here, and find the book at all good bookstores and online retailers.

We’re delighted to announce that from September 2007, Orbit UK is going to be distributing titles from Yen Press, the new manga line set up by our sister company, Hachette Book Group USA. We’re extremely excited at this development, and are looking forward to the first titles being available next month.

You can find out more about Yen Press, and forthcoming titles, on their website.

No, not the Orbit Christmas Party (although . . . ); we’re talking about virtual worlds such as World of Warcraft and Second Life, which seem to be being invaded by a new wave of cyber-crooks. There have been two stories floating about teh Intarwebs recently, involving criminal action in Second Life. Why do we care? Apart from a deeply held concern for our fellow beings, obviously? Because Orbit author Charles Stross anticipated them both. Who says SF can’t predict the future?

In an amazing case of (second) life imitating art, this story circulated a little over a week ago, outlining the theft of $3.2 million Linden Dollars from Second Life. This is scarily close to the central theme of Charlie’s forthcoming Halting State. We don’t publish Halting State until January 2008, but remember Charlie wrote it last year, so it still counts as prophecy! And as if that wasn’t enough Nostradamus-like gazing through the veil of time, we just spotted this on the website of The Australian newspaper. Again, Mr Stross was there first. The advent of virtual terrorism was outlined in this article Charlie wrote for online gaming site Guildcafé last March.

At the risk of taking liberties with Oscar Wilde’s famous wit: to predict one future event can be seen as fortunate, to predict two begins to look like cleverness.

So, if you want to know what the future might look like, read Charles Stross. He can’t do the lottery numbers (we checked) but there are few better authorities on emergent technology and how it might affect our lives.

Brian Ruckley’s debut novel Winterbirth is out in the UK in paperback this month, and we’ve received our first review for that edition from Graeme’s Fantasy Book Review:

[W]hat a story it is! It has everything that a fan of high . . . fantasy could possibly want out of a book. Epic battles, mystical forests and long journeys with a hint of magic (but not too much!) waiting in the wings. I particularly liked the air of ambiguity that Ruckley gives his characters, they all have good reasons for doing what they do and believe that they are right. Faced with such certainty on all sides, the reader really has to think about what side they will support (if any) and this makes me really look forward to the next book and what will happen next. Winterbirth is not without its flaws but if you persevere with it then I think you’ll be in for a treat of a read. I’d say that Brian Ruckley is definitely going to be one to watch out for in the future.

You can read the full review here.

Some more convention news, this time from Australia: Conflux 4 takes place in Canberra from 28 September to 1 October. As part of the build up to Conflux 4, there’s a ‘virtual minicon’ taking place on 4-5 August on the convention forums. A number of the guests appearing at the main convention will be chatting online — there’s a full list here. Orbit authors taking part include Glenda Larke, Fiona McIntosh, Karen Miller and Karen Traviss.

It’s still quite a long way off, but planning has already started for the Alt.Fiction event in Derby next April.

2007 was Orbit’s first year at the event, and we really enjoyed it: I appeared on a panel with literary agent John Jarrold and John Berlyne of sfrevu.com, Mike Carey did a workshop and a reading, and Iain M Banks rounded off the day in triumphant style with the first public reading from his forthcoming Culture novel, Matter (a covert recording of which turned up on YouTube shortly afterwards!).

After such a great experience, we were keen to return for the 2008 event, and I’m very pleased to say that we’ll be back there next April — so far, Orbit authors attending include Mike Carey, Philip Palmer and Brian Ruckley and Charles Stross. You can follow updates to the Alt.Fiction schedule at organiser Alex Davis’ blog.