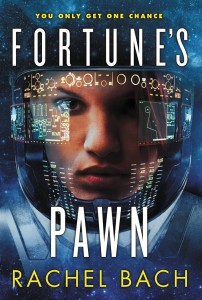 When did the idea for FORTUNE’S PAWN (US | UK | AUS) first come to you?

One summer day in 2011, I decided I wanted to read an action-packed space romance. I looked and looked, but I just couldn’t find one that scratched the right itch, so I wrote my own. This is why being a writer is awesome!

Okay, so that’s not really how it happened. I’ve actually been playing around in the world of Paradox for years. Devi started as a side character in an entirely different novel about the Blackbird Mercenaries, but when she stole the show and refused to give it back, I had no choice but to give her her own series. Then I wrote about half the book before I realized it needed to be first person, not third, so I had to go back and redo everything. So yeah, shereally muscled her way into the spotlight.

How was the transition from fantasy to science fiction?

Astonishingly easy. There’s a reason the two genres are mentioned together so frequently (so much so that they’ve merged into the übergenre of SF/F). Both feature created universes, significant personal actions, epic landscapes, and high-stakes scenarios. Both can even have magic! The only real difference is flavor and, of course, just how bound you’re willing to let yourself be by the realities of science.

But that goes for fantasy, too. Just as a hard-core military fantasy might get into the nitty-gritties of a prolonged siege that a lighter fantasy would gloss over, so lighter sci-fi can play a bit looser with the rules of the universe for the sake of the story. Because in the end, it’s the fiction half of science fiction that matters most.

That said, I hope any physics majors reading this will forgive me if something I mention in the book turns out to be physically impossible.

What was the inspiration behind Devi Morris?

I am a huge, huge fan of in-your-face, make-no-apologies female badasses. As I said earlier, Devi has been in my head for years, so her inspirations are wide and varied. There’s a lot of Toph Beifong from Avatar: The Last Airbender, some Paksenarrion from Elizabeth Moon’s amazing Deed of Paksenarrion, a little Killashandra from Anne McCaffrey’s Crystal Singer series, and a whole ton of Ellen Ripley from the Alien movies.

But all of these were just influences. Like all of my really good characters, Devi arrived fully formed in my head all on her own, guns loaded, ready to roll. Characters like this are both frustrating and amazing to write. Amazing because they write themselves, and frustrating because they occasionally write themselves incompletely the wrong direction. This aside, I wouldn’t trade Devi for the world. She’s a force of nature, an unreliable narrator, and a complete joy to write, and I wouldn’t have her any other way.

FORTUNE’S PAWN takes place in such a unique world. What was it like, creating such an intricate world with so many different species interacting and conflicting with one another?

This was where having the universe percolating in my head for years really helped out. By the time I started Fortune’s Pawn, I knew my world on the sort of deep, familiar level that normally requires several books to achieve. There’s actually a ton of stuff about Paradox I had to cut out because there was just no way to fit it into Devi’s story.

My number one rule for any world is that everything has to be understandable and connected. Things can’t just exist only because I think they’re cool or they help the plot along, there has to be a reason. Technology is a tool that changes the world for people who use it. Whenever I make a new place or add a new bit of tech, I’m always asking myself “How would people live here?” or “How would this change people’s lives?” and then I try to show how these changes and adaptations influence the society. This is the fun part of world building for me, trying to imagine how people would use things like jump gates and powered armor to change the way they live. I do this for every world I create, but you just can’t beat sci-fi for truly epic scale.

Along with the different species come different names. Was there a specific inspiration for names such as Lady Gray, Paradoxian, xith’cal, Hyrek…?

Fun fact: the actual name the original Earth colonists gave planet Paradox was “Paradise,” because it was a paradise, a beautiful, Earthlike planet just waiting to be colonized. But then horrible things happened, a lot of time passed, the language changed, and the name got transposed to “Paradox.” That’s the setting explanation, but the reason I named it Paradox is because the planet itself is a paradox: a hyperadvanced spacefaring society that still uses a feudal system, scorns democracy as heretical, and worships a divine godking (and yes, I did take liberal influence fromWarhammer 40k’s Divine Emperor).

Unfortunately, Paradox is the only name with a good story behind it. Everything else was named according to what I thought would be appropriate and/or cool at the time.

Speaking of, how do you actually say “xith’cal”?

I say it ZITH-cal, but you can say it however you want! I am not proprietary about my names. For example, I pronounce Devi’s name “Dev-ee,” but my editor at Orbit, whose name ALSO happens to be Devi out of SHEER AMAZING COINCIDENCE (my Devi was Devi years before I got Devi as my editor, but how’s that for amazing?), pronounces it “Dave-ee,” just like her own name. Am I going to tell my editor she’s mispronouncing her own name? Hell no! So go ahead, pronounce everything however you like. So long as you enjoy the book, that’s all I care about.

What is next for Devi and the Glorious Fool?

Well, as you can probably tell from the end of Fortune’s Pawn, things are about to go from bad to worse. Everyone’s going to have to pay for their actions in this book, especially Rupert, and the heat will be turning way up. Fortunately, Devi’s got it covered. Mostly. Sort of. In a “down to my last bullet and there are two enemies left, but if I shoot them both through the head in the same shot, I’ve got this covered” kind of way. Ah, Devi, you just don’t know when to quit!