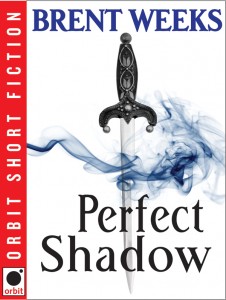 April 21st, 2011 – SF and Fantasy imprint Orbit has announced that it will be publishing a new novella by New York Times bestselling author Brent Weeks simultaneously in the US and the UK, in both e-book and digital-audio editions. Perfect Shadow, set in the world of his popular Night Angel Trilogy, will be released in June.

Orbit Publisher Tim Holman says: “The digital marketplace provides an irresistible opportunity to publish shorter works of fiction. With over a million copies sold worldwide since its launch in 2008, Brent Weeks’ Night Angel Trilogy has become one of the fastest selling fantasy series of all time. Publishing a new novella set in the same world, and doing so simultaneously around the world in ebook and audio editions, has been a really exciting publishing challenge – and working with Brent and his agent, Don Maass, to make it happen has been terrific.”

Brent Weeks says: “When I wrote Perfect Shadow, I was afraid it was going to fall into a publishing no-man’s land: too short to be distributed as a novel, too long to be sold as a short story. Orbit’s digital publishing has given me a way to get this story out. More than that, it’s given me the artistic freedom to write a story exactly as long as it needs to be.”

The e-book edition of Perfect Shadow will be available from e-book stores worldwide from June 2011. It will be simultaneously released as an unabridged audiobook for digital download.