The sun is always just about to rise. Mercury rotates so slowly that you can walk fast enough over its rocky surface to stay ahead of the dawn; and so many people do. Many have made this a way of life. They  walk roughly westward, staying always ahead of the stupendous day. Some of them hurry from location to location, pausing to look in cracks they earlier inoculated with bioleaching metallophytes,  quickly scraping free any accumulated residues of gold or tungsten or uranium. But most of them are out there to catch glimpses of the sun.

Mercury’s ancient face is so battered and irregular that the planet’s terminator, the zone of the breaking dawn, is a broad chiaroscuro of black and white—charcoal hollows pricked here and there by brilliant white high points, which grow and grow until all the land is as bright as molten glass, and the long day begun. This mixed zone of sun and shadow is often as much as thirty kilometers wide, even though on a level plain the horizon is only a few kilometers off. But so little of Mercury is level. All the old bangs are still there, and some long cliffs from when the planet first cooled and shrank. In a landscape so rumpled  the light can suddenly jump the eastern horizon and leap west to strike some distant prominence. Everyone walking the land has to attend to this possibility, know when and where the longest sunreaches occur—and where they can run for shade if they happen to be caught out.

Or if they stay on purpose. Because many of them pause in their walkabouts on certain cliffs and crater rims, at places marked by stupas, cairns, petroglyphs, inuksuit, mirrors, walls, goldsworthies. The sunwalkers stand by these, facing east, waiting.

The horizon they watch is black space over black rock. The superthin neon-argon atmosphere, created by sunlight smashing rock, holds only the faintest predawn glow. But the sunwalkers know the time, so they wait and watch—until—

a flick of orange fire dolphins over the horizon

and their blood leaps inside them. More brief banners follow, flicking up, arcing in loops, breaking off and floating free in the sky. Star oh star, about to break on them! Already their faceplates have darkened and polarized to protect their eyes.

The orange banners diverge left and right from the point of first appearance, as if a fire set just over the  horizon is spreading north and south. Then a paring of the photosphere, the actual surface of the sun,  blinks and stays, spills slowly to the sides. Depending on the filters deployed in one’s faceplate, the star’s actual surface can appear as anything from a blue maelstrom to an orange pulsing mass to a simple white circle. The spill to left and right keeps spreading, farther than seems possible, until it is very obvious one stands on a pebble next to a star.

Time to turn and run! But by the time some of the sunwalkers manage to jerk themselves free, they are  stunned—trip and fall—get up and dash west, in a panic like no other.

Before that— one last look at sunrise on Mercury. In the ultraviolet it’s a perpetual blue snarl of hot and hotter. With the disk of the photosphere blacked out, the fantastic dance of the corona becomes clearer,  all the magnetized arcs and short circuits, the masses of burning hydrogen pitched out at the night. Alternatively you can block the corona, and look only at the sun’s photosphere, and even magnify your  view of it, until the burning tops of the convection cells are revealed in their squiggling thousands, each a thunderhead of fire burning furiously, all together torching five million tons of hydrogen a second—at which rate the star will burn another four billion years. All these long spicules of flame dance in circular patterns around the little black circles that are the sunspots—shifting whirlpools in the storms of  burning. Masses of spicules flow together like kelp beds threshed by a tide. There are nonbiological explanations for all this convoluted motion—different gases moving at different speeds, magnetic fields fluxing constantly, shaping the endless whirlpools of fire—all mere physics, nothing more— but in fact it looks alive, more alive than many a living thing. Looking at it in the apocalypse of the Mercurial dawn, it’s impossible to believe it’s not alive. It roars in your ears, it speaks to you.

Most of the sunwalkers over time try all the various viewing filters, and then make choices to suit themselves. Particular filters or sequences of filters become forms of worship, rituals either personal or shared. It’s very easy to get lost in these rituals; as the sunwalkers stand on their points and watch, it’s  not uncommon for devotees to become entranced by something in the sight, some pattern never seen before, something in the pulse and flow that snags the mind; suddenly the sizzle of the fiery cilia becomes audible, a turbulent roaring—that’s your own blood, rushing through your ears, but in those  moments it sounds just like the sun burning. And so people stay too long. Some have their retinas burned; some are blinded; others are killed outright, betrayed by an overwhelmed spacesuit. Some are  cooked in groups of a dozen or more.

Do you imagine they must have been fools? Do you think you would never make such a mistake? Don’t you be so sure. Really you have no idea. It’s like nothing you’ve ever seen. You may think you are inured, that nothing outside the mind can really interest you anymore, as sophisticated and knowledgeable as you are.

But you would be wrong. You are a creature of the sun. The beauty and terror of it seen from so close can empty any mind, thrust anyone into a trance. It’s like seeing the face of God, some people say, and it is true that the sun powers all living creatures in the solar system, and in that sense is our god. The sight of it can strike thought clean out of your head. People seek it out precisely for that.

So there is reason to worry about Swan Er Hong, a person more inclined than most to try things just to   see. She often goes sunwalking, and when she does she skirts the edge of safety, and sometimes stays too  long in the light. The immense Jacob’s ladders, the granulated pulsing, the spicules flowing . . . she has fallen in love with the sun. She worships it; she keeps a shrine to Sol Invictus in her room, performs the pratahsamdhya ceremony, the salute to the sun, every morning when she wakes in town. Much of her landscape and performance art is devoted to it, and these days she spends most of her time making goldsworthies and abramovics on the land and her body. So the sun is part of her art.

Now it is her solace too, for she is out there grieving. Now, if one were standing on the promenade topping the city Terminator’s great Dawn Wall, one would spot her there to the south, out near the horizon. She needs to hurry. The city is gliding on its tracks across the bottom of a giant dimple between  Hesiod and Kurasawa, and a flood of sunlight will soon pour far to the west. Swan needs to get into town before that happens, yet she still stands there. From the top of the Dawn Wall she looks like a silver toy. Her spacesuit has a big round clear helmet. Her boots look big, and are black with dust. A little booted silver ant, standing there grieving when she should be hustling back to the boarding platform west of  town. The other sunwalkers out there are already hustling back to town. Some pull little carts or wheeled travois, hauling their supplies or even their sleeping companions. They’ve timed their returns closely, as the city is very predictable. It cannot deviate from its schedule; the heat of coming day expands the tracks, and the city’s undercarriage is tightly sleeved over them; so sunlight drives the city west.

The returning sunwalkers crowd onto the loading platform as the city nears it. Some have been out for weeks, or even the months it would take to make a full circumambulation. When the city slides by, its lock doors will open and they will step right in.

That is soon to occur, and Swan should be there too. Yet still she stands on her promontory. More than once she has required retinal repair, and often she has been forced to run like a rabbit or die. Now it will have to happen again. She is directly south of the city, and fully lit by horizontal rays, like a silver flaw in one’s vision. One can’t help shouting at such rashness, useless though it is. Swan, you fool! Alex is dead—nothing to be done about it! Run for your life!

And then she does. Life over death—the urge to live—she turns and flies. Mercury’s gravity, almost exactly the same as Mars’s, is often called the perfect g for speed, because people who are used to it can careen across the land in giant leaps, flailing their arms for balance as they bound along. In just that way Swan leaps and flails—once catches a boot and falls flat on her face—jumps up and leaps forward again. She needs to get to the platform while the city is still next to it; the next platform is ten kilometers farther west.

She reaches the platform stairs, grabs the rail and vaults up, leaps from the far edge of the platform, forward into the lock as it is halfway closed. 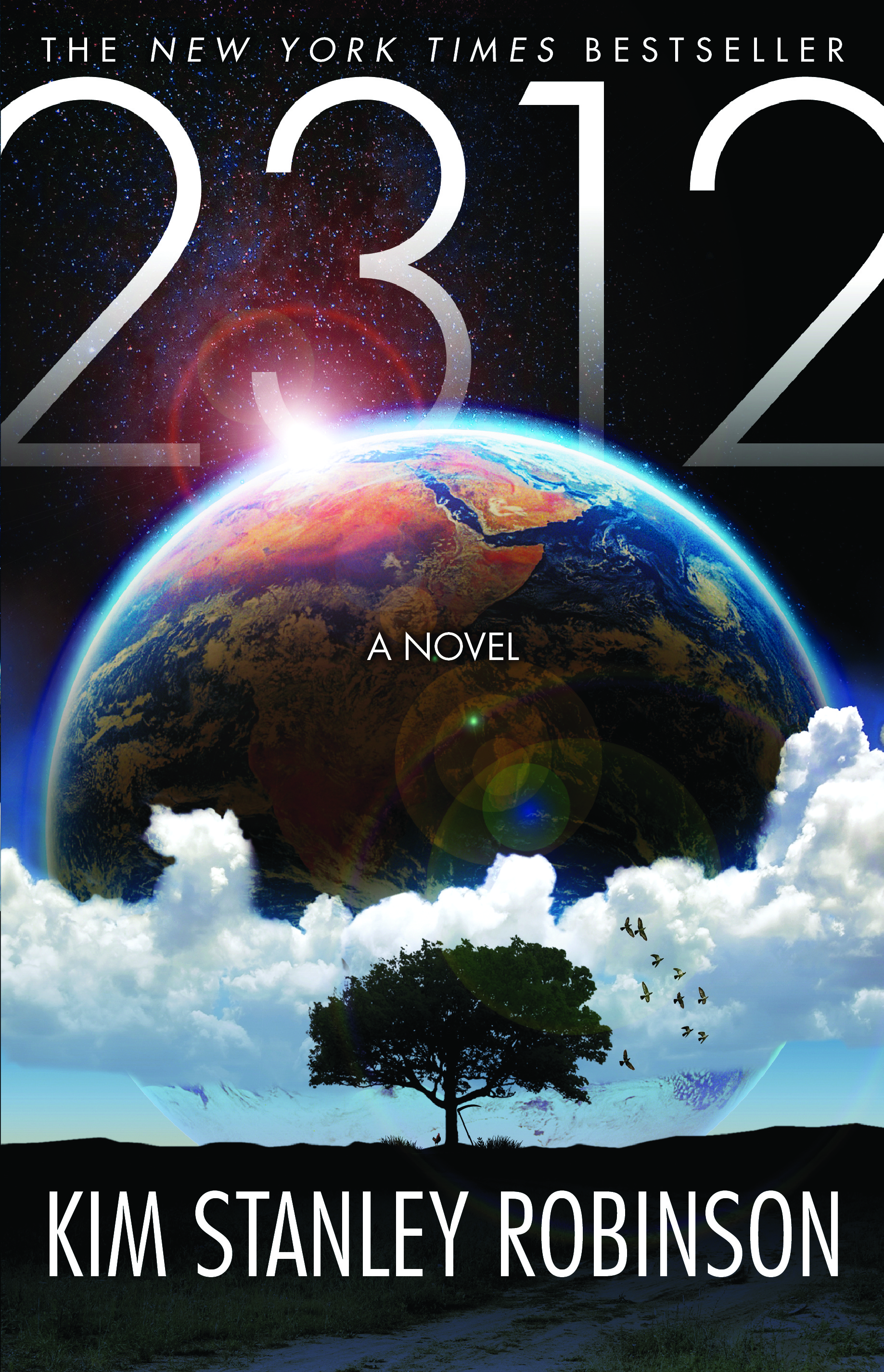 Kim Stanley Robinson is a winner of the Hugo, Nebula, and Locus awards. He is the author of nineteen previous books, including the bestselling Mars trilogy and the critically acclaimed Forty Signs of Rain, Fifty Degrees Below, Sixty Days and Counting, The Years of Rice and Salt, and Antarctica. In 2008, he was named a “Hero of the Environment” by Time magazine, and he recently joined in the Sequoia Parks Foundation’s Artists in the Back Country program. He lives in Davis, California.