A Boy and his Dog at the End of the World is the most moving and powerful story you’ll read this year. Perfect for readers of Life of Pi, The Girl With All the Gifts or Station Eleven, Griz’s tale mixes sadness and hope in one unforgettable character’s quest amid the ruins of our fragile civilisation.

Dogs were with us from the very beginning.

When we were hunters and gatherers and walked out of Africa and began to spread across the world, they came with us. They guarded our fires as we slept and they helped us bring down prey in the long dawn when we chased our meals instead of growing them. And later, when we did become farmers, they guarded our fields and watched over our herds. They looked after us, and we looked after them. Later still, they shared our homes and our families when we built towns and cities and suburbs. Of all the animals that travelled the long road through the ages with us, dogs always walked closest.

And those that remain are still with us now, here at the end of the world. And there may be no law left except what you make it, but if you steal my dog, you can at least expect me to come after you. If we’re not loyal to the things we love, what’s the point? That’s like not having a memory. That’s when we stop being human.

That’s a kind of death, even if you keep breathing.

So. About that. Turns out the world didn’t end with a bang. Or much of a whimper. Don’t get me wrong: there were bangs, some big, some little, but that was early on, before people got the drift of what was happening.

But bangs are not really how it ended. They were symptoms, not cause.

How it ended was the Gelding, though what caused that never got sorted out, or if it did it was when it was too late to do anything about it. There were as many theories as there were suddenly childless people – a burst of cosmic rays, a chemical weapon gone astray, bio- terror, pollution (you lot did make a mess of your world), some kind of genetic mutation passed by a space virus or even angry gods in pick-your-own-flavour for those who had a religion. The “how” and the “why” slowly became less important as people got used to the “what”, and realised the big final “when” was heading towards them like a storm front that not even the fastest, the richest, the cleverest or the most powerful were going to be able to outrun.

The world – the human part of it – had been gelded or maybe turned barren – perhaps both – and people just stopped having kids. That’s all it took. The Lastborn generation – the Baby Bust as they called themselves, proving that irony was one of the last things to perish – they just carried on getting older and older until they died like people always had done.

And when they were all gone, that was it. No bang, no whimper even. More of a tired sigh.

It was a soft apocalypse. And though it probably felt pretty hard for those it happened to, it did happen. And now we few – we vanishingly few – are all alone, stuck here on the other side of it.

How can I tell you this and not be dead? I’m one of the eh, exceptions that proves the rule. They estimated maybe 0.0001 per cent of the world population somehow escaped the Gelding. They were known as outliers. That means if there were 7,000,000,000 people before the Gelding, less than 7000 of them could have kids. One in a million. Give or take, though since it takes two to make a baby, more like one in two million.

You want to know how much of an outlier I am? You, in the old picture I have of you, are wearing a shirt with the name of an even older football club on it. You look really happy. In my whole life, I haven’t met enough people to make up two teams for a game of football. The world is that empty.

Maybe if this were a proper story it would start calm and lead up to a cataclysm, and then maybe a hero or a bunch of heroes would deal with it. I’ve read plenty of stories like that. I like them. Especially the ones where a big group of people get together, since the idea of a big group of people is an interesting thing for me all by itself, because though I’ve seen a lot, I’ve never seen that.

But this isn’t that kind of story. It’s not made up. This is just me writing down the real, telling what I know, saying what actually took place. And everything that I know, even my being born, happened long, long after that apocalypse had already softly wheezed its way out.

I should start with who I am. I’m Griz. Not my real name. I have a fancier one, but it’s the one I’ve been called for ever. They said I used to whine and grizzle when I was a baby. So I became the Little Grizzler and then as I got taller my name got shorter, and now I’m just Griz. I don’t whine any more. Dad says I’m stoical, and he says it like that’s a good thing. Stoical means doesn’t complain much. He says I seemed to get all my complaining out of the way before I could talk and now, though I do ask too many questions, mostly I just get on with things. Says that like it’s good too. Which it is. Complaining doesn’t get anything done.

And we always have plenty to do, here at the end of the world.

Here is home, and home is an island, and we are my family. My parents, my brother and sister, Ferg and Bar. And the dogs of course. My two are Jip and Jess. Jip’s a long-legged terrier, brown and black, with a rough coat and eyes that miss nothing. Jess is as tall as he is but smooth-coated, narrower in the shoulders and she has a splash of white on her chest. Mongrels they are, brother and sister, same but different. Jess is a rarity, because dog litters seem to be all male nowadays. Maybe that’s to do with the Gelding too. Perhaps whatever hit us, hit them too, but in a lesser way. Very few bitches are born now. Maybe that’s a downside for the dogs, punishment for their loyalty, some cosmically unfair collateral damage for walking alongside us all those centuries.

We’re the only people on the island, which is fine, because it’s a small island and it fits the five of us, though sometimes I think it fit us better and was less claustrophobic when there were six. It’s called Mingulay. That’s what its name was when you were alive. It’s off the Atlantic coast of what used to be Scotland. There’s nothing to the west of it but ocean and then America and we’re pretty sure that’s gone.

To the north there’s Pabbay and Sandray, low islands where we graze our sheep and pasture the horses. North of them is the larger island called Barra but we don’t land there, which is a shame as it has lots of large houses and things, but we never set foot on it because something happened and it’s bad land. It’s a strangeness to sail past a place so big that it eh, even has a small castle in the middle of its harbour for your whole life, and yet never walk on it. Like an itch you can’t quite reach round and scratch. But Dad says if you set foot on Barra now you get something much worse than an itch, and because it’s what killed his parents, we don’t go. It’s an unlucky island and the only things living there these days are rabbits. Even birds don’t seem to like it, not even the gulls who we never see landing above the wet sand below the tideline.

North-east of us are a long low string of islands called the Uists, and Eriskay, which are luckier places, and we go there a lot, and though there are no people on them now, there’s plenty of wildlife and lazy- beds for wild potatoes. Once a year we go and camp on them for a week or so while we gather the barley and the oats from the old fields on the sea lawn. And then sometimes we go there to do some viking. “Going a-viking” is what Dad calls it when we sail more than a day and sleep over on a trip, going pillaging like the really ancient seafarers in the books, with the longships and the heroic deeds. We’re no heroes though; we’re just scavenging to survive, looking for useful things from the old world, spares or materials we can strip out from the derelict houses. And books of course. Books turn out to be pretty durable if they’re kept away from damp and rats. They can last hundreds of years, easy. Reading is another way we survive. It helps to know where we came from, how we got here. And most of all, for me, even though these low and empty islands are all I have ever known, when I open the front cover of a new book, it’s like a door, and I can travel far away in place and time.

Even the wide sea and the open sky can be claustrophobic if you never get away from them.

So that’s who I am, which just leaves you. In some way you know who you are, or at least, you knew who you were. Because you’re dead of course, like almost every single human who ever walked the planet, and long dead too.

And why am I talking to a dead person? We’ll get back to that. But first we should get on with the story. I’ve read enough to know that I should do the explaining as we go. 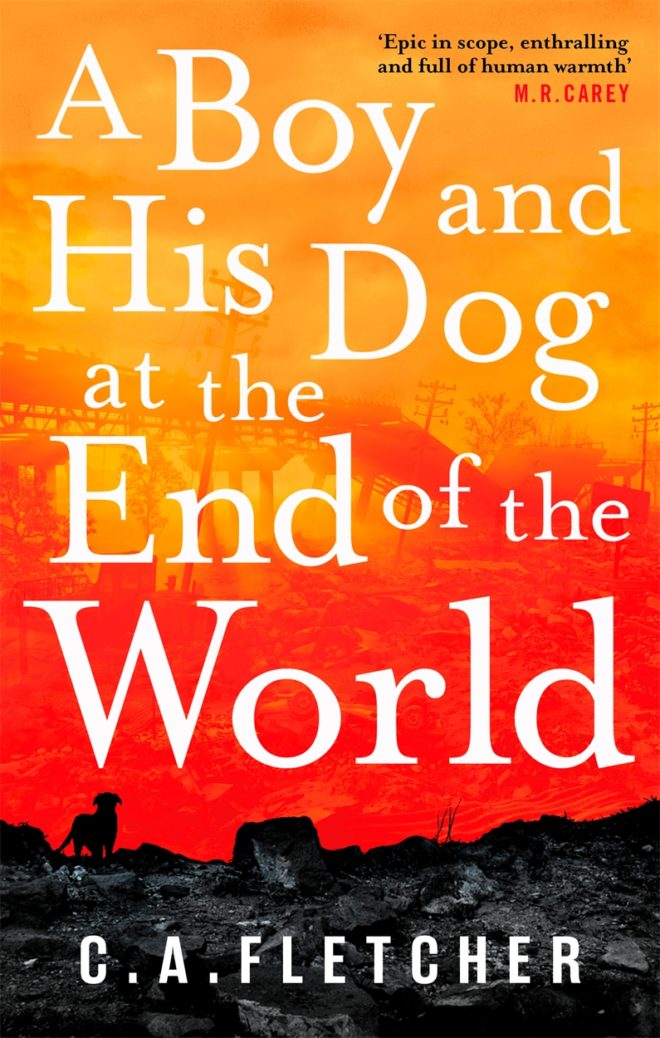 C. A. Fletcher has children and dogs. He lives in Scotland and writes for a living.

“A truly engrossing survival story, which gives us a haunting vision of a ruined Britain that’s both dangerous and strangely beautiful . . . brings hope and humanity to a cold and scary world” Keith Stuart, author of A Boy Made of Blocks

“Family, loyalty and humanity amid the lonely but beautiful wilderness of the end of the world – with a gut punch you’ll never see coming. That twist! That ending! You’ll remember A Boy and His Dog at the End of the World long after you finish reading” Peng Shepherd, author of The Book of M

“This novel has everything I love about a story: fully realised characters, beautiful writing and utterly believable, even frightening, world-building . . . I promise you’re going to love it” Louisa Morgan, author of A Secret History of Witches

“Epic in scope, enthralling and full of human warmth” M. R. Carey, author of The Girl With All the Gifts

“A story that is as heart-warming as it is heartbreaking . . . I’m still thinking about this book, weeks after finishing it” Fantasy Hive

“Fletcher does a masterful job keeping the stakes high and the suspense crackling while still creating plenty of space for readers to get to know Griz and explore this fascinating not-quite-empty world. This un-put-down-able story has everything – a well-imagined post-apocalyptic world, great characters, incredible suspense and, of course, the fierce love of some very good dogs” Kirkus (starred review)