“I had hoped that Isencroft wouldn’t see war again in my lifetime.” King Donelan of Isencroft took a deep breath and swirled the brandy in his goblet. “I had my fill of it in my younger days. It was a bad bargain then, and it hasn’t gotten any better.”

“It’s not by your choosing, m’lord.” Wilym, the head of the elite Veigonn warriors and a close personal friend of the king’s, set aside his drink. “Temnotta’s made the first move.”

Donelan sighed. “Spare me any words about a “good war.” There is no “good” war. The only thing worse than war is slavery. I know we have no choice, dammit. I know Temnotta cast the die. But it’s a funny thing about war. Even when you win, you lose. There are several thousand men having a good night’s sleep tonight who won’t be breathing by war’s end. There are villages that won’t exist when the fighting’s through. I never thought a king’s reputation was earned on the battlefield. I always thought it was earned by making sure fields never saw battle. War is easy. But keeping peace for any length of time; well, that’s the tricky part.”

Donelan downed the last of his brandy in one gulp, and for a moment, Cam thought the king might pour himself another drought. Instead, Donelan let his head rest against the chair and closed his eyes. And although Cam had been the King’s Champion for years, never had he thought Donelan looked so worn and tired. “There are no thoughts in my head fit to fall asleep with,” Donelan said, his voice gravelly with fatigue. “Tell me just one good thing before I turn in for the night. I’d rather not dream of war.”

Cam exchanged worried glances with Wilym. “Think on the packet you received this morning from Kiara,” Wilym said. “You told me her letter says that she and Cwynn are doing well, and that the baby has a fine appetite. The portrait she sent showed a healthy, strong boy. And they’re safe from this madness, far away in Margolan.” He chuckled. “I’ve heard it said that no one except Martris Drayke himself ever breeched the walls of the palace Shekerishet. Count that as your good thing to sleep on, Your Majesty. Kiara and Cwynn are safe.”

Donelan seemed to relax. The king was known both for his appetite for strong drink and for his ability to seem utterly untouched by it. Cam wished that tonight the brandy might overcome the king’s tolerance and give Donelan a few candlemarks of untroubled sleep.

“Aye, that’s a fine thing,” Donelan agreed, his voice a deep rumble. “A fine thing to sleep on. Thank you.”

“The fire setter’s been to your room a candlemark ago,” Wilym replied. “The chill will be off and the fire should be banked for the night. We have a few more days before the army heads for the coast. Perhaps you should enjoy a bed while you have the chance.” He chuckled. “Even the finest cot gives a poor night’s rest once we’re in the field.”

Donelan stretched and twisted in his chair, as if to loosen his shoulders. “I think I will,” he said, and he smiled, but Cam saw that it didn’t reach his eyes. “Thanks to you both for sitting with me a while. I’d best let you get some rest as well.” Donelan stood and walked across the sitting room to where a guard stood by the door to his bedchamber. He glanced over his shoulder. “Mind that you’re careful going about your business. I’ll need both of you beside me when we ride for the coast.”

The door closed behind Donelan, and the guard resumed his place. “I’m worried about him,” Cam remarked quietly.

Wilym was silent for a moment. “Donelan drew his first blood on the battlefield when we were still sucking on our mothers’ teats. Does it surprise you that it gets tiresome after twenty-some years? By the Whore! I’m wholly sick of every campaign by the end of the first battle, and I haven’t seen as much of it as he has.”

Cam nodded. “I’ve never met a sane man yet who enjoys battle, even if they love soldiering. I’m just not used to seeing Donelan look so haggard. Now it seems his dreams are dark. Makes me worried—“

A man’s scream cut off the rest of Cam’s words. Cam and Wilym jumped to their feet as the guard threw open the door to Donelan’s chamber.

“Sweet Chenne,” the guard whispered, blanching. Cam and Wilym shouldered past him at a dead run, and stopped at the foot of the king’s bed.

Six stout pikes thrust up through the bed, spanning from one side to the other. Donelan lay impaled, with one of the spikes protruding from his chest. Blood spread down the king’s nightshirt, soaking the bedding, enough blood that Cam was sure the spike had taken Donelan through the heart.

“Get Trygve!” Wilym shouted. He grabbed the guard by the shoulders and spun him around, shoving him out the door. “Run, dammit!” He turned back to the king. “Hang on, Donelan. Trygve will be here in a moment.”

Donelan’s whole frame shook. His hands opened and closed convulsively, grasping at the covers. The king’s eyes were wide with pain and shock, and his mouth opened and closed, gasping for breath. Wilym took the king’s hand. “Hold on, please. Just hold on.”

Cam drew his sword and made a thorough inspection of the room. The king’s private quarters were large, but by design, they offered no easy hiding place. Cam flung open the wardrobe doors, but found nothing except dress robes. The garderobe alcove was empty, with an opening too small for even a slender boy to navigate. Then he looked at the high four-poster bed. The frame was at least two feet off the floor, tall enough that two steps were required for Donelan to climb onto the mattress, and it was skirted with heavy tapestry material. When Cam knelt to look under the bed, he caught his breath.

Cam climbed to his feet. “Someone’s rigged a bow contraption beneath the bed. Must have gone off once there was weight on it.”

Trygve barreled through the doorway, followed by the guard, who seemed close to panic.

“Mother and Childe!” Trygve swore under his breath, never breaking stride until he reached Donelan’s side. Cam and Wilym melted back along the wall, giving the healer room to work. Trygve was one of the finest battle healers in all of Isencroft, but by the set of his mouth, Cam could tell that Trygve was worried.

“We’ve got to remove the stake, and the moment we do, he’ll start bleeding harder.” Trygve’s voice was clipped.

“Tell us what to do,” Wilym said, as he and Cam stepped forward.

“Can you retract the weapon from below? I’d rather not try to lift him.”

Cam dropped to his knees. “I think so. It’s been bound to the frame with rope.”

“Then on my mark, with one of you on each side, slice the ropes while I try to staunch the bleeding.” Trygve climbed up on the bed and straddled the king’s body so that his hands were best positioned above the wound. “On three: one…two…three.”

The two swords swished through the air simultaneously, slicing through the ropes and hitting the bed frame with a thunk. The stakes dropped, but did not completely retract.

Trygve cursed. “Get on your knees. On my mark again, grab each side of that cursed thing and pull straight down.”

This time, the apparatus gave way. Cam and Wilym climbed back to their feet. Donelan gave a sharp cry, and Trygve murmured healing incantations while his hands cupped over the hole in Donelan’s chest. Blue healing light glowed beneath Trygve’s hands. But from where Cam stood, Donelan’s skin looked ashen, and his body had gone still. Trygve’s tension gave Cam no reassurance.

Blood spattered Trygve’s healer’s uniform and his hands were slick. Donelan’s breathing was slow and labored. Trygve leaned closer, and the blue light flared. Donelan murmured something Cam could not hear, and then, with one heavy breath, the king lay still.

Trygve bowed his head and his shoulders sagged. “I’m sorry. It was too much damage. Perhaps if we’d had a summoner to bind his soul, we might have bought more time for healing. The stake…it tore through his heart….” His voice faded. Slowly, he climbed down from the bed and drew up a sheet to cover Donelan’s body.

Cam turned to the guard at the door. The young man stared wide-eyed at the king’s body. “Who beside the firesetter entered the king’s rooms tonight?

It took two tries for the guard to find his voice. “No one, m’lord. There’s been a guard at the door to the king’s bed chamber all day. The chamber maids set out his night clothes, but they come on the watch before mine, just before supper.”

“We’ll find the firesetter, and the maids, and the previous guard.” Wilym’s voice was tight and emotionless, and only his eyes revealed his sorrow. “I hand-picked the king’s guards myself, and I’d swear to their loyalty on my own life. As for the servants, we’ll get to the bottom of it.”

Cam looked at Wilym and Trygve. “The army’s about to head to war, and the king’s dead.”

Wilym took a deep breath. “How fast can a vayash moru travel from here to Shekerishet?”

“Yes I am.” Wilym’s expression was resolute. “Kiara may be Queen of Margolan, but she is also the rightful heir to the Isencroft throne. We have no choice except to call her home to lead her people. Alvior’s behind this. He’ll count on chaos slowing our response. Maybe he’s betting that without Donelan, we’ll fall into a full civil war, and he can sweep up the pieces. The army can move without the king. But the people need someone who can rally them, someone to remind them why they fight.”

Footsteps in the doorway made them turn. Both Cam and Wilym drew their swords. Kellen stepped into the room, followed by Tice and Allestyr. “By the Whore!” Kellen swore softly. Tice froze, a look of shock on his face. Allestyr swallowed back a sob.

“It’s true, then.” Allestyr was the first to speak. Tears ran down his cheeks. “The servants found us when the guard came for Trygve. Is he—“

Wilym nodded. “Donelan is dead. And if Isencroft is to survive, the six of us must make it happen.” 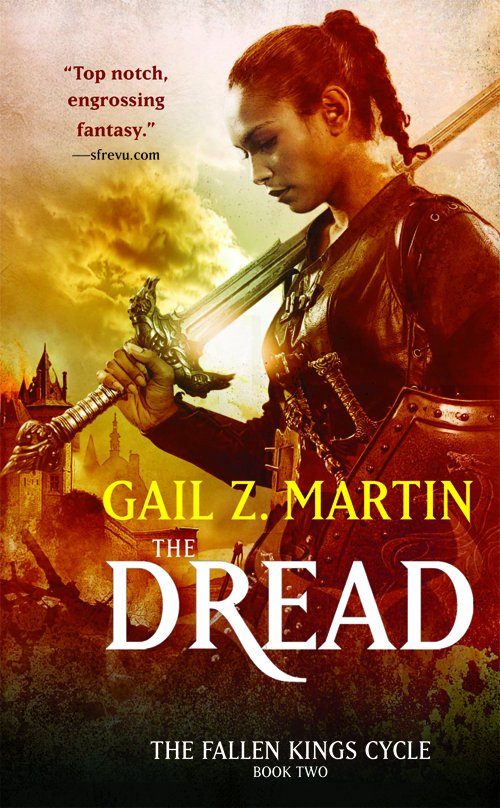 Gail Z. Martin discovered her passion for SF, fantasy and ghost stories in elementary school. The first story she wrote – at age five – was about a vampire. Her favorite TV show as a preschooler was Dark Shadows. At age 14 she decided to become a writer. She enjoys attending SF/Fantasy conventions, Renaissance fairs and living history sites. She is married, and has three children, a Himalayan cat and a golden retriever.