The wall was a head higher than Quire. He threw himself at it, got both elbows hooked over, and dragged himself up.

Rough ground sloped away from the foot of the wall. Humps and hollows, their underlying nature disguised by the snow, made an undulating descent towards the banks of Duddingston Loch…

Two figures were fleeing across that narrow expanse. The first was already disappearing into the dense, obscuring vegetation at the edge of the ice; the second, bigger, slower, shovel still held loosely in one hand, was closer.

A fatter, brighter moon would have helped a good deal, for the world was indistinct. Imprecise. All shapes and shadows and shades of grey. But Quire knew – everybody knew – that the Resurrection Men did not come on the nights of a full moon. They liked the dark. So be it.

He dropped down from the wall far more carefully than his surging anger would have wished. He did not want a turned or broken ankle ending his hunt before it was properly begun. The snow cushioned his landing, and he sprang forward. Down across the field he ran, leaping from high point to high point, snow making clouds about his pounding feet. He carried the musket in one hand, hip-high, barrel to the fore, pointing the way ahead.

The first of the grave robbers – Blegg, a silent voice insisted over and over again within him; Blegg – was out of sight, vanished into the willow trees and reed beds, swallowed up by the enveloping darkness. But the second, Quire knew he could catch. The man had a long stride, but he ran with a strange lack of urgency. He was only now crashing noisily through the tangled bushes that marked the transition from land to water. Land to ice.

The slope levelled out beneath Quire’s feet. He found himself, surreally, running through a thick stand of tall reeds and bulrushes. Running on ice. He slowed, and that very caution, the change in his stride, sent his leading foot skidding out from under him. He fell heavily on his side, trapping the musket beneath his body and grinding the knuckles of the hand that held it into the ice. For one moment he was looking up through the forest of reeds, seeing them swaying above him, and beyond them the starry sky, black as ink.

Then he rolled on to his hands and knees, pushed himself up, and ran out on to the ice. A flat, open field of snow, stretching almost to the limits of his vision, though he knew that by day this did not seem a great body of water. Ghostly, almost, in its featureless perfection. Not silent. Quire could hear three things: his own increasingly heavy, increasingly strained breathing; the hollow, crunching thud of his feet beating on the hard skin of the loch; and another set of feet, out of time with his own, up ahead.

He saw his quarry lope to a gradual halt, and turn about and stand there, almost at the very centre of the loch. The grave robber waited. Quire’s blood was running hot and hard, but not sufficiently so as to render him witless. He slowed too, and approached the man at a slow walk, hefting the Bess in two hands now. Hoping that it would still discharge, if called upon; it had been so long since he had had to think of such things that he had failed to check it after climbing over the wall, or falling on the ice. Perhaps his blood was indeed running too hot for his own good.

“Put that shovel down, would you?” he called as he closed to within twenty paces.

He was startled by how loud and clear his voice sounded on the still, frigid air with the ice to set it ringing out in all directions. He stopped, and stood with his finger resting lightly on the trigger.

The man to whom he had spoken gave no response. Gave no sign at all, in fact, that he had heard Quire, or noticed his approach. Quire frowned. It was difficult to be certain, for he could see not much more of the man than his outline, but he did not seem to be breathing hard, as his exertions should surely have required.

“If you make me ask again, I’ll not be so polite,” Quire said.

The man came forward without haste; one, two long strides closing almost half the gap to Quire.

“For God’s sake, man,” Quire shouted, alarmed by the sudden arrival of a moment from which there would likely be no good outcome.

He hesitated, just for the space of one breath, hampered by an acquired restraint that never would have troubled him in his younger days. He had unlearned just enough to make him pause, make him think where once there would have been no thought. He set the Brown Bess to his shoulder, shouting as he did so:

The man was raising the shovel. Quire sighted along the barrel, staring into the black mass of the man’s chest, worrying whether he could trust his left arm to hold the gun steady. Another half a second of doubt, washed away by one thought: he’s already killed one man tonight. He squeezed the trigger.

The rasping click of the hammer falling, the flint sparking. A flaring, blinding light in his right eye. Smoke puffing upwards. The musket kicking his shoulder, sending out a lance of flame and more white smoke from its mouth. The crash of the shot, loud as a cannon out here on the ice, echoing from the trees around the loch and from the great night-clad mass of Arthur’s Seat. Quire blinked, chasing the dancing lights out of his eye, squinting through the drifting smoke. It had been a good shot, undoubtedly; he had put the ball right into the man’s chest. Probably killed him. He was therefore astonished to find the great dark figure bearing down on him at pace, the shovel lifted onehanded against the sky. 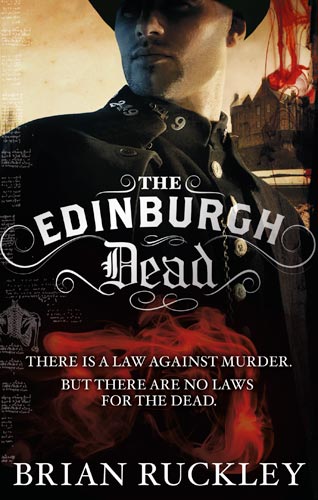 Brian Ruckley was born and raised in Scotland. After studying at Edinburgh and Stirling Universities, he worked for a series of organizations dealing with environmental, nature conservation and youth development issues. He lives in Edinburgh.