From the author of the critically acclaimed Snakewood and The Winter Road comes a gritty and epic stand-alone adventure that’s perfect for fans of Mark Lawrence, Joe Abercrombie and Andrzej Sapkowski’s The Witcher.

She’s been more brave, more resistant to the torture than any of the humans.

Behind her stands one of her own people, an Ososi, a giant of their kind. Some of the slaves here hail him as a brother, proclaiming that they have been changed from ordinary humans to immortal Ososi soldiers. Full of pride they show me their glistening brains and the artless ruin they’ve become under the knives of these drudhas who removed the tops of their skulls and experimented with flowers and roots, poisons and herbs in that quivering, warm clay.

She watches me as all the elderly Ososi have in the time since I have served the Accord, as I take their hands, transmit this shivering dust and let what I taste evolve their pain. They look at me with all the contempt a mortal lifetime confers. “It is just power” speak their eyes. Between her cries of pain she hums a handful of cracked notes, a childhood song, I think, for it is a song I heard also the Oskoro children put into harmonies, the Ososi’s distant kin that once lived far across the Sar sea in the Citadels. She sings one note in a minor key here, and I marvel at the depth of the change it makes to the lullaby, a note that remakes the song as though she’s sending it backwards to the girl she once was.

Then I catch a word – the dust has unlocked something in her, the name of a river, and hearing it sends a rare shiver of happiness through me. In her delirium, mumbling, chasing a memory that must have followed her song, she has given me a clue to where the rest of her tribe may live. I look up at the giant Ososi behind her, known to all in these lands as Scar. Many years ago he had been capped, the top of his skull removed to leave the braegnloc ready to receive the Flower of Fates. It would have made him the tribe’s chief. The work done on his skull had only just been completed when the elders of his tribe learned he was not worthy of the honour of leading them. He carved the skin from their faces, cut their own skulls to pieces and stitched both to cover his head again. He is my finest hunter. He knows of the river this old woman’s pain has revealed. I’ll join his crew and we will find the children belonging to her tribe. I will hope too for that wisp of disorientation, that lurch in the belly if it’s close, the power of another magist, of Lorom Haluim, the one I have been tasked to find, to lead the Accord to.

“Thank you.” She frowns, not realising I’m speaking to Scar, ordering her execution. His hands go to her head and chin, a smooth, fast twist breaking her neck.

Scar drags her body past me and out of the tent. We’ve had some quiet while the drudhas have been spooning out the droop to the prisoners, stupefying them for a while. Many are in persistent agony as a result of our work, the price of progress on any frontier.

A cold wind enters the tent as Scar leaves. This camp is high in the Sathanti Peaks, away from the scrutiny of all but the wretched tribes that live in these heights. The drudhas make good progress for they are working with living slaves that I have provided them. The soldiers they will soon learn to make from these slaves will be more than a match for any army this world could muster. The Lord Yeismic Marghoster has been as generous in the provision of slaves as his word. It took very little to fix the deformities of his younger daughter and his gratitude has been predictably ample. I recall he wept and kissed my feet as she ran about us for the first time in her life. Who alive, after all, has met a magist such as I? Their myths make us out to be gods, understandable given their limitations. His wife, more sensibly, screamed, a horrified suspicion on her. For some time she thought it must have been a trick, some potion that would wear off. I wish I could feel as these people do; their mortality generates such heat.

As I ate and nodded where required at a feast to celebrate the miracle of her straightened bones, Marghoster shared his fears for the prospects of his oldest daughter, a potential marriage to the heir to the throne of Farlsgrad, young Prince Moryc Hildmir. As I told him how little the Hildmirs would soon matter I felt his wife next to me grow more disturbed by my proximity, shifting in her seat, sweating. Yeismic would not have approved of some of her thoughts. She suffered the memories that come unbidden while in proximity to a magist for two whole courses of our dinner before excusing herself, tears streaming from her eyes. We agreed that the joy of seeing a crippled child cured could be overwhelming to a woman’s more sensitive disposition.

Scar returns, giving a short grunt as he forces his huge frame through the flap of the tent. He stands once more, silent, eyes following me as I wipe the Ososi woman’s piss off the only chair here.

“I don’t like this place. I wish I could return home.” I don’t expect a reply but I need, sometimes, to say it out loud. I unstopper the wine flask and pour a cup. Taste is the second most interesting thing about taking the form of a human.

“I hope we’ll find those escaped Oskoro with that old woman’s tribe.” Scar remains silent, watches me drink. I see a subtle shift in his eyes, a tenth of a smirk, a mote of annoyance. We had tried to capture or kill the Oskoro that lived across the sea in Citadel Hillfast. Bigger than the Ososi, an older race, all of their kind are as dangerous as Scar, and their chief, the Master of Flowers, far more so. With Scar’s crew we butchered all the Oskoro we could find, for they could not withstand me. They cried out for Lorom Haluim, even his master, Sillindar, one that I dared not hope would appear. Sillindar is the Accord’s great enemy and the reason for my search for Haluim, who has made his home on this world. I quelled as many Oskoro as I could, my dust taking their strength so they could be tied up. But a handful of them saw their chance, aided by the Master of Flowers, drawing in and killing two of our mercenaries, wounding even Scar. The Master, a drudha and five others fled. Worse was still to come, for as we threw lime bombs into the houses that remained, one of the women came out holding a great prize in her arm, a baby girl, her skull newly cut, the skin sewn back and a seed in her skull – clearly marking her as their future leader, the next Master of Flowers. Her mother saw us, saw me and raised a knife. I raised my arms up, a supplicating gesture, waving to instruct my men to stay back. In the sudden stillness, all of us focused on the child, I felt it, like a gossamer skin on every particle of air and tree, flower and body. Sillindar. Sillindar was here not many years past, within the life span of the woman before us. Then she brought the knife down. The baby didn’t make a sound. I threw forward my arms, the dust of creation from my hands, a moment too late. The air spun savagely, my thought made material, a force to tear the knife from her fingers. But she’d stabbed herself in the gut, the force I’d applied pulling the knife up through her stomach instead of into the air. She fell to her knees gasping, letting her baby fall to the ground. Scar rushed forwards to it, kicking her back. He took the baby up in an arm while the other reached for a pouch, a salve that hissed hot on the tiny body. He hummed and shushed her as he did so. I ran to them, smoothing my dust over the hole in her chest but she was already dead. Reversing death is beyond me. I attempted it nevertheless. I always do.

The wind scuffs and kicks at the tent flap. I stand and take a fur from the desk nearby. Scar remains still. He’s elsewhere, eyes vacant.

#“You’ll leave tomorrow. Tell your soldiers. I will return to Farlsgrad’s capital, Autumn’s Gate. The High Red, Yblas, has returned from the Old Kingdoms. I must be at his administrator’s side.” 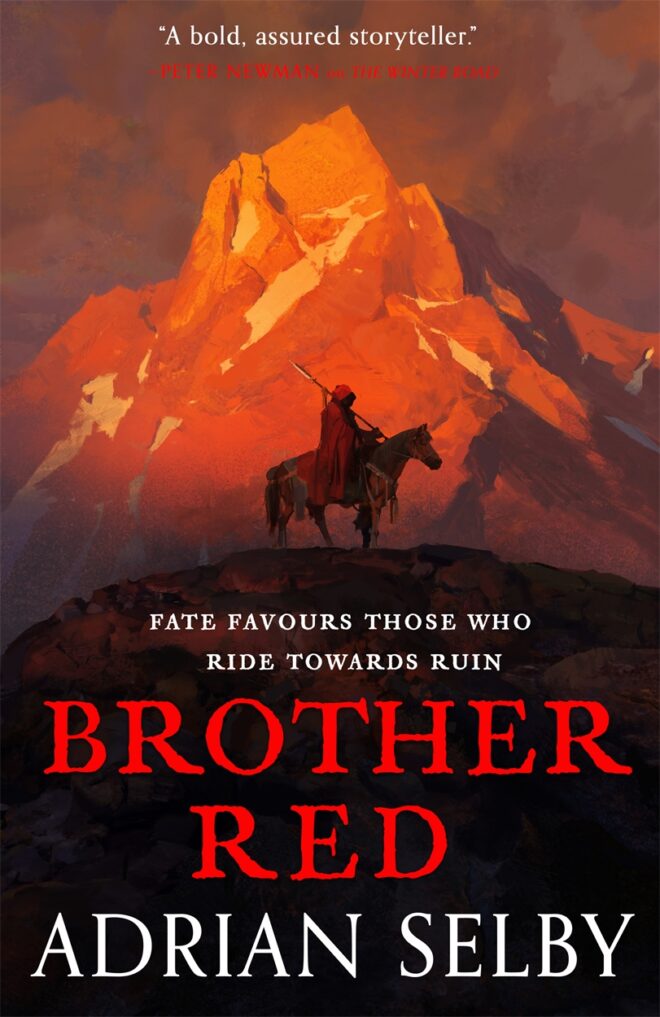 Adrian Selby is a father of three who lives in Sussex and has worked as a video game producer. His debut novel, Snakewood, is an epic and inventive fantasy about a company of mercenaries and the assassin trying to destroy them. You can find Adrian on Twitter, tweeting under @adrianlselby.

“A lot to enjoy, especially if you are a fan of dark, gritty, old-soldier stories” Fantasy Faction on Snakewood

“Wears its grimdark on its sleeve . . . a thrilling tale of adventure, betrayal, triumph and loss” Interzone on Snakewood

“Grim mercenaries and badass alchemists brought to life by a bold, assured storyteller” Peter Newman, author of The Vagrant, on Snakewood

“This book took me on an emotional rollercoaster . . . Highly recommended” John Gwynne