If you liked CHARMING, be sure to check out the earlier adventures of John Charming in these short stories by Elliott James:

There’s a reason that we refer to being in love as being enchanted. Think back to the worst relationship you’ve ever been in: the one where your family and friends tried to warn you that the person you were with was cheating on you, or partying a little too much, or a control freak, or secretly gay, or whatever. Remember how you were convinced that no one but you could see the real person beneath that endearingly flawed surface? And then later, after the relationship reached that scorched-earth-policy stage where letters were being burned and photos were being cropped, did you find yourself looking back and being amazed at how obvious the truth had been all along? Did it feel as if you were waking up from some kind of a spell?

Well, there’s something going on right in front of your face that you can’t see right now, and you’re not going to believe me when I point it out to you. Relax, I’m not going to provide a number where you can leave your credit card information, and you don’t have to join anything. The only reason I’m telling you at all is that at some point in the future, you might have a falling-out with the worldview you’re currently enamored of, and if that happens, what I’m about to tell you will help you make sense of things later.

Zombies, Ankou, djinn, Boo Hags, banshees, ghouls, spriggans, windigos, vodyanoi, tulpas, and so on and so on, all real. Well, except for Orcs and Hobbits. Tolkien just made those up.

I know it sounds ridiculous. How could magic really exist in a world with an Internet and forensic science and smartphones and satellites and such and still go undiscovered?

The answer is simple: it’s magic.

The truth is that the world is under a spell called the Pax Arcana, a compulsion that makes people unable to see, believe, or even seriously consider any evidence of the supernatural that is not an immediate threat to their survival.

I know this because I come from a long line of dragon slayers, witch finders, and self-righteous asshats. I used to be one of the modern-day knights who patrol the borders between the world of man and the supernatural abyss that is its shadow. I wore non-reflective Kevlar instead of shining armor and carried a sawed-off shotgun as well as a sword; I didn’t light a candle against the dark, I wielded a flamethrower…right up until the day I discovered that I had been cursed by one of the monsters I used to hunt. My name is Charming by the way. John Charming.

And I am not living happily ever after.

Chapter 1: A blonde and a vampire walk into a bar…

Once upon a time, she smelled wrong. Well, no, that’s not exactly true. She smelled clean, like fresh snow and air after a lightning storm and something hard to identify, something like sex and butter pecan ice cream. Honestly, I think she was the best thing I’d ever smelled. I was inferring “wrongness” from the fact that she wasn’t entirely human.

I later found out that her name was Sig.

Sig stood there in the doorway of the bar with the wind behind her, and there was something both earthy and unearthly about her. Standing at least six feet tall in running shoes, she had shoulders as broad as a professional swimmer’s, sinewy arms, and well-rounded hips that were curvy and compact. All in all, she was as buxom, blonde, blue-eyed, and clear-skinned as any woman who had ever posed for a Swedish tourism ad.

And I wanted her out of the bar, fast.

You have to understand, Rigby’s is not the kind of place where goddesses were meant to walk among mortals. It is a small, modest establishment eking out a fragile existence at the tail end of Clayburg’s main street. The owner, David Suggs, had wanted a quaint pub, but instead of decorating the place with dartboards or Scottish coats of arms or ceramic mugs, he had decided to celebrate southwest Virginia culture and covered the walls with rusty old railroad equipment and farming tools.

When I asked why a bar—excuse me, I mean pub—with a Celtic name didn’t have a Celtic atmosphere, Dave said that he had named Rigby’s after a Beatles song about lonely people needing a place to belong.

“Names have power,” Dave had gone on to inform me, and I had listened gravely as if this were a revelation.

Speaking of names, “John Charming” is not what it reads on my current driver’s license. In fact, about the only thing accurate on my current license is the part where it says that I’m black-haired and blue-eyed. I’m six foot one instead of six foot two and about seventy-five pounds lighter than the 250 pounds indicated on my identification. But I do kind of look the way the man pictured on my license might look if Trevor A. Barnes had lost that much weight and cut his hair short and shaved off his beard. Oh, and if he were still alive.

And no, I didn’t kill the man whose identity I had assumed, in case you’re wondering. Well, not the first time anyway.

Anyhow, I had recently been forced to leave Alaska and start a new life of my own, and in David Suggs I had found an employer who wasn’t going to be too thorough with his background checks. My current goal was to work for Dave for at least one fiscal year and not draw any attention to myself.

Which was why I was not happy to see the blonde.

For her part, the blonde didn’t seem too happy to see me either. Sig focused on me immediately. People always gave me a quick flickering glance when they walked into the bar—excuse me, the pub—but the first thing they really checked out was the clientele. Their eyes were sometimes predatory, sometimes cautious, sometimes hopeful, often tired, but they only returned to me after being disappointed. Sig’s gaze, however, centered on me like the oncoming lights of a train—assuming train lights have slight bags underneath them and make you want to flex surreptitiously. Those same startlingly blue eyes widened, and her body went still for a moment.

Whatever had triggered her alarms, Sig hesitated, visibly debating whether to approach and talk to me. She didn’t hesitate for long, though—I got the impression that she rarely hesitated for long and chose to go find herself a table.

Now, it was a Thursday night in April, and Rigby’s was not empty. Clayburg is host to a small private college named Stillwaters University, one of those places where parents pay more money than they should to get an education for children with mediocre high school records, and underachievers with upper- middle-class parents tend to do a lot of heavy drinking. This is why Rigby’s manages to stay in business. Small bars with farming implements on the walls don’t really draw huge college crowds, but the more popular bars tend to stay packed, and Rigby’s does attract an odd combination of local rednecks and students with a sense of irony. So when a striking six-foot blonde who wasn’t an obvious transvestite sat down in the middle of the bar, there were people around to notice.

Even Sandra, a nineteen-year-old waitress who considers customers an unwelcome distraction from covert texting, noticed the newcomer. She walked up to Sig promptly instead of making Renee, an older waitress and Rigby’s de facto manager, chide her into action.

For the next hour I pretended to ignore the new arrival while focusing on her intently. I listened in—my hearing is as well developed as my sense of smell—while several patrons tried to introduce themselves. Sig seemed to have a knack for knowing how to discourage each would-be player as fast as possible.

She told suitors that she wanted to be up-front about her sex change operation because she was tired of having it cause problems when her lovers found out later, or she told them that she liked only black men, or young men, or older men who made more than seventy thousand dollars a year. She told them that what really turned her on was men who were willing to have sex with other men while she watched. She mentioned one man’s wife by name, and when the weedy-looking grad student doing a John Lennon impersonation tried the sensitive-poet approach, she challenged him to an arm-wrestling contest. He stared at her, sitting there exuding athleticism, confidence, and health—three things he was noticeably lacking—and chose to be offended rather than take her up on it.

There was at least one woman who seemed interested in Sig as well, a cute sandy-haired college student who was tall and willowy, but when it comes to picking up strangers, women are generally less likely to go on a kamikaze mission than men. The young woman kept looking over at Sig’s table, hoping to establish some kind of meaningful eye contact, but Sig wasn’t making any.

Sig wasn’t looking at me either, but she held herself at an angle that kept me in her peripheral vision at all times.

For my part, I spent the time between drink orders trying to figure out exactly what Sig was. She definitely wasn’t undead. She wasn’t a half-blood Fae either, though her scent wasn’t entirely dissimilar. Elf smell isn’t something you forget, sweet and decadent, with a hint of honey blossom and distant ocean. There aren’t any full-blooded Fae left, of course—they packed their bags and went back to Fairyland a long time ago—but don’t mention that to any of the mixed human descendants that the elves left behind. Elvish half-breeds tend to be somewhat sensitive on that particular subject. They can be real bastards about being bastards.

I would have been tempted to think that Sig was an angel, except that I’ve never heard of anyone I’d trust ever actually seeing a real angel. God is as much an article of faith in my world as he, she, we, they, or it is in yours.

Stumped, I tried to approach the problem by figuring out what Sig was doing there. She didn’t seem to enjoy the ginger ale she had ordered—didn’t seem to notice it at all, just sipped from it perfunctorily. There was something wary and expectant about her body language, and she had positioned herself so that she was in full view of the front door. She could have just been meeting someone, but I had a feeling that she was looking for someone or something specific by using herself as bait… but as to what and why and to what end, I had no idea. Sex, food, or revenge seemed the most likely choices.

I was still mulling that over when the vampire walked in. 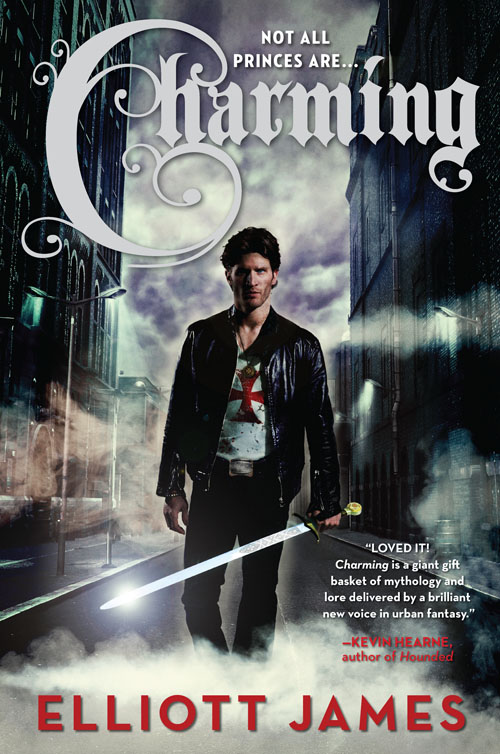 An army brat and gypsy scholar, ELLIOTT JAMES is currently living in the Blue Ridge Mountains of southwest Virginia. An avid reader since the age of three (or that’s what his family swears anyhow), he has an abiding interest in mythology, martial arts, live music, hiking, and used bookstores. Irrationally convinced that cellphone technology was inserted into human culture by aliens who want to turn us into easily tracked herd beasts, Elliott has one anyhow but keeps it in a locked tinfoil covered box which he will sometimes sit and stare at mistrustfully for hours. Okay, that was a lie. Elliott lies a lot; in fact, he decided to become a writer so that he could get paid for it.