The gates have opened the way to a thousand new worlds and the rush to colonize has begun. Read an excerpt from the fourth novel in James S.A. Corey's exciting Expanse series – soon to be a major television series!

A thousand worlds, Bobbie thought as the tube doors closed. And not just a thousand worlds. A thousand systems. Suns. Gas giants. Asteroid belts. Everything that humanity had spread to, a thousand times over. The screen above the seats across from her showed a newsfeed, but the speakers were broken, the man’s voice too fuzzed to make out the words. The graphic that zoomed in and out beside him was enough for her to follow. New data had come in from the probes that had gone through the gates. Here was another image of an unfamiliar sun, circles to mark the orbits of new planets. All of them empty. Whatever had built the protomolecule and fired it toward Earth back in the depths of time wasn’t answering calls anymore. The bridge builder had opened the way, and no great gods had come streaming through.

It was astounding, Bobbie thought, how quickly humanity could go from What unimaginable intelligence fashioned these soul-wrenching wonders? to Well, since they’re not here, can I have their stuff?

“ ’Scuse me,” a man’s phlegmy voice said. “You wouldn’t have a little spare change for a veteran, would you?”

She looked away from the screens. The man was thin, gray-faced. His body had the hallmarks of a childhood in low g: long body, large head. He licked his lips and leaned forward.

“Ganymede,” the man said, nodding and looking off with an attempt at nobility. “I was there when it all came down. When I got back here, government dropped me on my ass. I’m just trying to save up enough to book passage to Ceres. I’ve got family there.”

Bobbie felt a bubble of rage in her breast, but she tried to keep her voice and expression calm. “You try veteran’s outreach? Maybe they could help you.”

“I just need something to eat,” he said, his voice turning nasty. Bobbie looked up and down the car. Usually there would be a few people in the cars at this time. The neighborhoods under the Aurorae Sinus were all connected by evacuated tube. Part of the great Martian terraforming project that had begun before Bobbie was born and would go on long after she was dead. Just now, there was no one. She considered what she would look like to the beggar. She was a big woman, tall as well as broad, but she was sitting down, and the sweater she’d chosen was a little baggy. He might have been under the misapprehension that her bulk was fat. It wasn’t.

“What company did you serve with?” she asked. He blinked. She knew she was supposed to be a little scared of him, and he was uneasy because she wasn’t.

“What company did you serve with?”

He licked his lips again. “I don’t want to—”

“Because it’s a funny thing,” she said. “I could have sworn I knew pretty much everyone who was on Ganymede when the fighting started. You know, you go through something like that, and you remember. Because you see a lot of your friends die. What was your rank? I was gunnery sergeant.”

The gray face had gone closed and white. The man’s mouth pinched. He pushed his hands deeper into his pockets and mumbled something.

“And now?” Bobbie went on, “I work thirty hours a week with veteran’s outreach. And I’m just fucking sure we could give a fine upstanding veteran like you a break.”

He turned, and her hand went out to his elbow faster than he could pull away. His face twisted with fear and pain. She drew him close. When she spoke, her voice was careful. Each word clear and sharp.

The car shifted, decelerating into the first Breach Candy station. She let him go and stood up. His eyes went a little wider when she did. Her genetic line went back to Samoa, and she sometimes had that effect on people who weren’t expecting her. Sometimes she felt a little bad about it. Not now.

Her brother lived in a nice middle-class hole in Breach Candy, not far from the lower university. She’d lived with him for a time after she got back home to Mars, and she was still putting the pieces of her life back together. It was a longer process than she’d expected. And part of the aftermath was that she felt like she owed her brother something. Family dinner nights was part of that.

The halls of Breach Candy were sparse. The advertisements on the walls flickered as she came near, face recognition tracking her and offering up the products and services they thought she might want. Dating services, gym memberships, take-out shwarma, the new Mbeki Soon film, psychological counseling. Bobbie tried not to take it personally. Still, she wished there were more people around, a few more faces to add variety to the mix. To let her tell herself the ads were probably meant for someone walking nearby. Not for her.

But Breach Candy wasn’t as full as it used to be. There were fewer people in the tube stations and hallways, fewer people coming to the veteran’s outreach program. She heard that enrollment at the upper university was down six percent.

Humanity hadn’t managed a single viable colony on the new worlds yet, but the probe data was enough. Humanity had its new frontier, and the cities of Mars were feeling the competition.

As soon as she stepped in the door, the rich scent of her sister-in-law’s gumbo thickening the air and making her mouth water, she heard her brother and nephew, voices raised. It knotted her gut, but they were family. She loved them. She owed them. Even if they made the idea of take-out shwarma seem awfully tempting.

“—not what I’m saying,” her nephew said. He was in upper university now, but when the family started fighting, she could still hear the six-year-old in his voice.

Her brother boomed in reply. Bobbie recognized the percussive tapping of his fingertips against the tabletop as he made his points. Drumming as a rhetorical device. Their father did the same thing.

“Mars is not optional.” Tap. “It is not secondary.” Tap. “These gates and whatever’s on the other side of them isn’t our home. The terraforming effort—”

“I’m not arguing against the terraforming,” her nephew said as she walked into the room. Her sister-in-law nodded to her from the kitchen wordlessly. Bobbie nodded back. The dining room looked down into a living space where a muted newsfeed was showing long-distance images of unfamiliar planets with a beautiful black man in wire-rimmed glasses speaking earnestly between them. “All I’m saying is that we’re going to have a lot of new data. Data. That’s all I’m saying.”

The two of them were hunched over the table like there was an invisible chessboard between them. A game of concentration and intellect that wrapped them both up until they couldn’t see the world around them. In a lot of ways, that was true. She took her chair without either of them acknowledging she’d arrived.

“Mars,” her brother said, “is the most studied planet there is. It doesn’t matter how many new datasets you get that aren’t about Mars. They aren’t about Mars! It’s like saying that seeing pictures of a thousand other tables will tell you about the one you’re already sitting at.”

“Knowledge is good,” her nephew said. “You’re the one who always told me that. I don’t know why you’re getting so bent about it now.”

“How are things for you, Bobbie?” her sister-in-law said sharply, carrying a bowl to the table. Rice and peppers to use as a bed for the gumbo and a reminder to the others that there was a guest. The two men scowled at the interruption.

“Good,” Bobbie said. “The contract with the shipyards came through. It should help us place a lot of vets in new jobs.”

“Because they’re building exploration ships and transports,” her nephew said.

“Sorry, Mom. But they are,” David replied, not backing down. Bobbie scooped the rice into her bowl. “All the ships that are easy to retrofit, they’re retrofitting, and then they’re making more so that people can go to all the new systems.”

Her brother took the rice and the serving spoon, chuckling under his breath to make it clear how little he respected his son’s opinion. “The first real survey team is just getting to the first of these places—”

“There are already people living on New Terra, Dad! There were a bunch of refugees from Ganymede—” He broke off, shooting a guilty glance at Bobbie. Ganymede wasn’t something they talked about over dinner.

“The survey team hasn’t landed yet,” her brother said. “It’s going to be years before we have anything like real colonies out there.”

“It’s going to be generations before anyone walks on the surface here! We don’t have a fucking magnetosphere!”

Her sister-in-law returned. The gumbo was black and fragrant with a sheen of oil across the top. The smell of it made Bobbie’s mouth water. She put it on the slate trivet and handed the serving spoon to Bobbie.

“And how’s your new apartment?” she asked.

“I wish you weren’t living in Innis Shallow,” her brother said. “It’s a terrible neighborhood.”

“No one’s going to bother Aunt Bobbie,” her nephew said. “She’d rip their heads off.”

Bobbie grinned. “Naw, I just look at them mean, and they—”

From the living room, there was a sudden glow of red light. The newsfeed had changed. Bright red banners showed at the top and bottom, and on the screen, a jowly Earth woman looked soberly into the camera. The image behind her was of fire and then a stock image of an old colony ship. The words, black against the white of the flames, read TRAGEDY ON NEW TERRA. 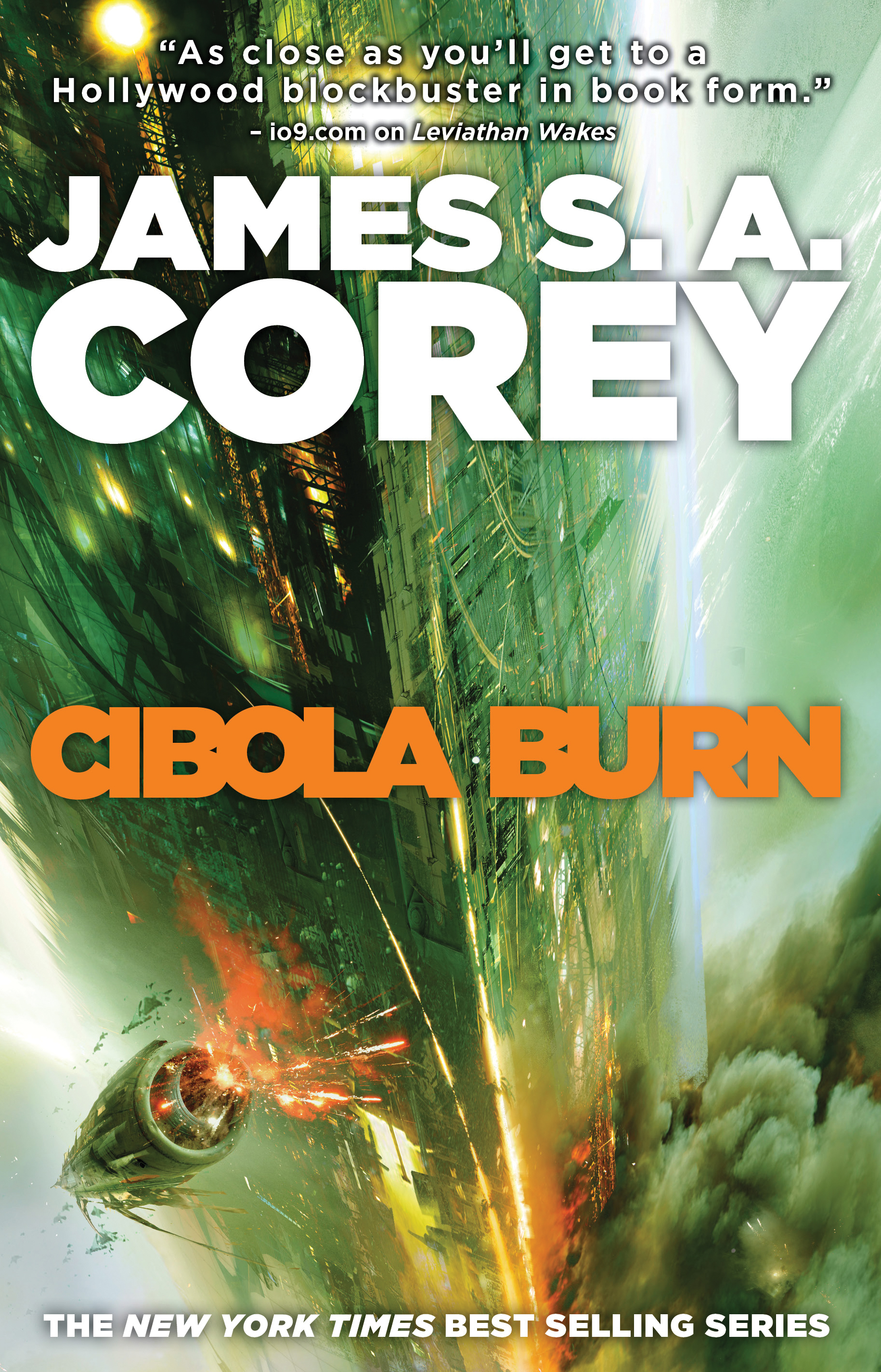 James S. A. Corey is the pen name of fantasy author Daniel Abraham and Ty Franck.

“As close as you'll get to a Hollywood blockbuster in book form” io9.com on Leviathan Wakes

“Interplanetary adventure the way it ought to be written” George R. R. Martin