Fae and vampires collide in the lush surrounding of New Orleans, in a new urban fantasy series by House of Comarré author Kristen Painter.

“Why can’t we take the streetcar?” Walking home from church at night was always a little scary for Augustine, especially when they had to go past the cemetery.

“You know why,” Mama answered. “Because we don’t have money for things like that. Not that your shiftless father would help out. Why I expect anything from that lying, manipulative piece of . . .” She grunted softly and shook her head.

Augustine had never met his father, but from what Mama had told him, which wasn’t much, his father didn’t seem like a very nice man. Just once, though, Augustine would like to meet him to see what he looked like. Augustine figured he must look like his father, because he sure didn’t look like Mama. Maybe if they met, he’d also ask his father why he never came around. Why he didn’t want to be part of their family. Why Mama cried so much.

With a soft sigh, he held Mama’s hand a little tighter, moving closer to her side. Unlike him, Mama only had five fingers on each hand, not six. She didn’t have gray skin or horns like him, either. She didn’t like his horns much. She kept them filed down so his hair hid the stumps. He jammed his free hand into his jacket pocket, the move jogging him to the side a little.

“Be careful, Augustine. You’re going to make me trip.”

“Sorry, Mama.” The sidewalks were all torn up from the tree roots poking through them. The moon shone through those big trees with their twisty branches and clumps of moss, and cast shadows that looked like creatures reaching toward them. He shivered, almost tripping over one of the roots.

She jerked his arm. “Pay attention.”

“Yes, Mama.” But paying attention was what had scared him in the first place. He tried shutting his eyes, picking his feet up higher to avoid the roots.

Next thing he knew, his foot caught one of those roots and he was on his hands and knees, the skin on his palms burning from where he’d scraped them raw on the rough sidewalk. His knee throbbed with the same pain, but he wouldn’t cry, because he was almost nine and he was a big boy. Old enough to know that he must also control the powers inside him that wanted to come out whenever he felt angry or hurt or excited.

“Oh, Augustine! You ripped your good pants.” Mama grabbed his hand and tugged him to his feet.

“I’m sorry about my pants.” He stood very still, trying not to cause any more trouble. Mama got so angry, so fast. “My knee hurts.”

With a sigh, Mama crouched down, pulled a tissue from her purse, spit on it and began to dab at the blood. “It will be okay. It’s just a little scrape. And you heal . . . quickly.”

The dabbing hurt worse, but he kept quiet, biting at his cheek. He looked at his hands, opening his twelve fingers wide. Already the scrapes there were fading. It was because of his fae blood, which he wasn’t supposed to talk about. He dropped his hands and stared at the tall cemetery wall next to them. On the other side of that wall were a lot of dead people. In New Orleans, no one could be buried underground because of the water table. He’d learned that in school.

The wind shook the tree above their heads, making the shadows crawl toward them. He inched closer to her and pointed at the cemetery. “Do you think there’s ghosts in there, Mama?”

She stood, ignoring his pointing to brush dirt off his jacket. “Don’t be silly. You know ghosts aren’t real.”

The cemetery gates creaked. She turned, then suddenly put him behind her. Around the side of her dress, Augustine could see a big shape almost on them, smell something sour and sweaty, and hear heavy breathing. Mama reached for Augustine, jerking them both back as the man grabbed for her.

The man missed, but Mama’s heart was going thump, thump, thump. That was another fae thing Augustine wasn’t supposed to talk about, being able to hear extra-quiet sounds like people’s hearts beating.

“C’mere, now,” the man growled. Even in the darkness, Augustine’s sharp fae eyes could see the man’s teeth were icky.

Mama swung her purse at him. “Leave us alone!”

“Us?” The man grunted, his gaze dropping to Augustine. Eyes widening for a second, he snorted. “Your runt’s not going to ruin my fun.”

“I’m not a runt,” Augustine said. Fear made his voice wobble, but he darted out from behind his mother anyway, planting himself in front of her.

The man swatted Augustine away with a meaty hand.

Augustine hit the cemetery wall, cracking his head hard enough to see stars. But with the new pain came anger. And heat. The two mixed together like a storm in his belly, making him want to do . . . something. He tried to control it, but the man went after Mama next, grabbing her and pushing her to the ground. Then the man climbed on top of her.

She cried out and the swirling inside Augustine became a hurricane dragging him along in its winds. Without really knowing what he was doing, he leaped onto the man’s back. The hard muscle and bone he expected seemed soft and squishy. He grabbed fistfuls of the man’s jacket—but his hands met roots and dirt and shards of concrete instead.

Mama’s eyes blinked up at him, wide and fearful. She seemed a little blurry. Was he crying? And how was he seeing her when he was on the man’s back? And why had everything gone so quiet? Except for a real loud tha-thump, tha-thump, tha-thump, everything else sounded real far away. He pushed to his knees, expecting them to sting from his fall, but he felt nothing. And the man attacking his mother was somehow . . . gone.

“Don’t, Augustine.” She shook her head as she scrabbled backward. “Don’t do this.”

“Don’t do what, Mama?” He reached for her but the hand that appeared before him was too big. And only had five fingers. He stuck his other hand out and saw the same thing. “What’s happening to me, Mama?”

“Get out of him, Augustine.” She got to her feet, one trembling hand clutching the crucifix on her necklace. “Let the man go.”

He stood and suddenly he was looking down at his mother. Down. How was he doing that? He glanced at his body. But it wasn’t his body, it was the man’s.

“I don’t understand.” But he had an idea. Was this one of the powers he had? One of the things he was supposed to control? He didn’t know how to get out. Was he trapped? He only wanted to protect his mother, he didn’t want to be this man!

The storm inside him welled up in waves. The heat in his belly was too much. He didn’t understand this new power. He wanted to be himself. He wanted to be out. Panic made bigger waves, hot swells that clogged his throat so he couldn’t take deep breaths. The thumping noise got louder.

The man’s hands reached up to claw at Augustine, at his own skin.

Mama backed away, her fingers in the sign of the cross. He cried out to her for help. He was too hot, too angry, too scared—

A loud, wet pop filled his ears and he fell to his hands and knees again, this time covered in sticky red ooze and smoking hunks of flesh. The thumping noise was gone. Around him was more sticky red, lumps of flesh and pieces of white bone. All he could think about was the time he and Nevil Tremain had stuffed a watermelon full of firecrackers. Except this was way worse. And blowing up the watermelon hadn’t made him feel like throwing up. Or smelled like burnt metal. He sat back, wiped at his face and eyes and tried to find his mother. She was a few feet away, but coming closer.

“You killed that man.” She stood over him looking more angry than afraid now. “You possessed that man like a demon.” She pointed at him. “You’re just like your father, just like that dirty fae-blooded liar.”

Augustine shook his head. “That man was hurting you—”

“Yes, you saved me, but you took his life, Augustine.” She looked around, eyes darting in all directions. “Sturka,” she muttered, a fae curse word Augustine had once gotten slapped for saying.

“And who’s next? Are you going to help me that way too someday?”

He was crying now, unable to help himself. “No, Mama, no. I would never hurt you.”

She grabbed him by his shirt and yanked him to his feet. “Act human, not like a freak, do you understand? If people could see what you really looked like . . .” Fear clouded her eyes.

He nodded, sniffling, hating the smell of the blood he was covered in. He didn’t want to be a freak. He really didn’t. “I can act human. I promise.”

She let go of his shirt, her lip slightly curled as she looked him over. “This was your father’s blood that caused this. Not mine.”

“Not yours,” Augustine repeated. Mama looked human but was part smokesinger, something he knew only because he’d overheard an argument she’d had with his father on the phone once. He’d learned other things that way, too. Like that his father was something called shadeux fae. But not just part. All of him. And he’d lied to Mama about that. Used magic to make Mama think he was human. To seduce her.

“I never want to hear or see anything fae ever again or I will put you out of my house. I live as human and while you’re under my roof, so will you. Am I clear?”

The thought of being without her made his chest ache. She was all he had. His world. “Yes, Mama.”

But keeping his fae side hidden was impossible and five years later, put him out is exactly what she did. 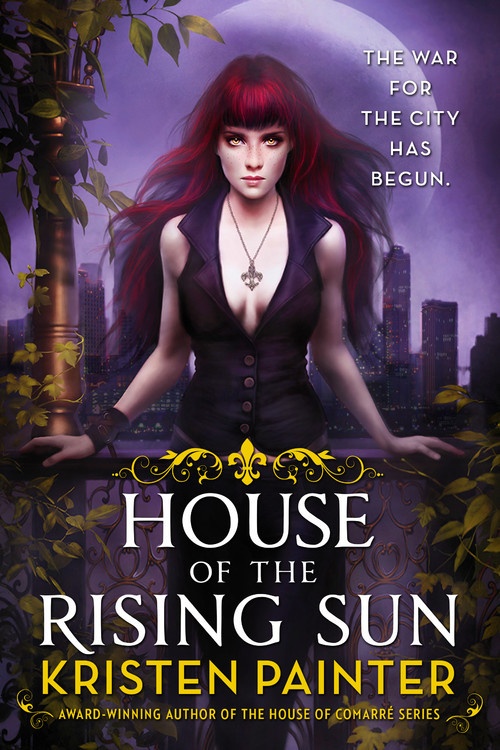 Kristen Painter’s writing resume boasts multiple Golden Heart nominations and advance praise from a handful of bestselling authors, including Gena Showalter and Roxanne St. Claire. A former New Yorker now living in Florida, Kristen has a wealth of fascinating experiences from which to flavor her stories, including time spent working in fashion for Christian Dior and as a maitre’d for Wolfgang Puck.

'Painter scores with this one. Passion and murder, vampires and courtesans – original and un-put-downable. Do yourself a favour and read this one' Patricia Briggs, New York Times bestselling author on Blood Rights