Jade Legacy is the conclusion to the Green Bone Saga series: a gripping family saga and fantasy epic, set in an Asian-inspired metropolis. “The Godfatherwith magic and kung-fu”

The Double Double hotel and casino was an unlikely place to incite revolution. It was merely a convenient target because Bero worked there and knew how to get past security. While the city of Janloon shivered at the sudden onset of the coldest, wettest winter in decades, the bright lights and clamor of the gambling floor continued unabated at all hours, pouring money from high rollers and foreign tourists into the coffers of the No Peak clan. That would not be the case today.

At ten minutes to noon, Bero pushed a luggage cart with three suitcases across the casino floor and into an elevator. Three businessmen in the elevator were carrying on a heated conversation.  The Mountain is offering me a tribute rate that’s fifteen percent lower. The Kauls can’t match that,” grumbled a bald man in a blue suit. “Yet they’re still expecting me to compete with the foreign chain stores that are popping up like weeds because of the trade deals they’ve pushed on the country.”

His colleague grimaced. “Would you rather pay tribute to Ayt Mada, though?”

“Ayt’s a power-hungry murderer, but so what? They all are. She did what she had to do, to keep the Mountain clan in line,” said the tanned third businessman. “At least she puts Kekonese interests first, and now that she’s finally named an heir, I think—”

The elevator door, which had begun to close, opened again and two foreigners stepped inside, taking up the remaining space next to Bero’s luggage cart. They were in plainclothes, but they didn’t seem like tourists. The three businessmen stopped talking and eyed the strangers with polite suspicion. Janloon was crawling with foreign corporate and government agents these days.

The elevator descended to the parking level and opened with a quiet ping. When all the other occupants had exited, Bero rolled the luggage cart and its contents into the parking lot and looked at his watch. Green Bones of the No Peak clan kept a close eye on the lucrative betting houses of Poor Man’s Road, but there were only so many of them patrolling the district. Eiten, the former Fist who’d given Bero his job at the Double Double, was not in today. After weeks of timing the security shifts, Bero knew that at precisely noon, none of the clan’s other jade warriors would be on the premises either. Of course, once the commotion started, they would arrive in short order, so speed was vital.

A van pulled into the parking space next to Bero. Tadino jumped out of the driver’s seat; Otonyo and Guriho got out of the rear. Bero did not particularly like the three Oortokons, with their foreign accents and ugly Ygutanian clothes, especially Tadino, who had the sharp bark and narrow face of a rat terrier. Nevertheless, they were the only people Bero had met who hated the Green Bone clans as much as he did, who wanted to see them come crashing down.

“Didn’t get stopped or questioned at all,” Tadino crowed. Even if they had been, there were no weapons or other suspicious items in the van. Bero pulled the suitcases off the luggage cart and threw them open on the ground. Guriho, Otonyo, and Tadino pulled out the contents: gas masks, spray paint, crowbars, handguns, and tear gas grenades.

When they were fully equipped, Bero used his employee key to get them into the stairwell next to the elevators. At the top of the stairs, he unlocked the upper set of doors, letting them out into the carpeted hallway behind the casino’s kitchen.

Tadino grinned and pulled the gas mask over his face. Guriho and Otonyo clapped each other on the back and did the same, Guriho struggling for a moment to stuff his long beard under the seal of the mask. They didn’t glance back at Bero as they rushed down the hall. Otonyo rolled one of the tear gas canisters into the kitchen and Tadino hurled another one onto the casino floor, where it began to hiss and spew its contents. Bero flattened himself out of sight against the door of the stairwell as the shouting began, followed by sounds of coughing, gagging, and stampeding feet. A unshot went off, and noise erupted in earnest—cries of alarm above the toppling of dishes and furniture, the breaking of glass, the metallic banging of emergency exits, and the rapid whap of the casino’s revolving doors as the patrons of the Double Double fled choking from the premises, spilling in a panicked rush from the dim warm comfort of their games tables onto the main strip of Poor Man’s Road.

Bero wrapped a bandana over his nose and mouth and peered around the corner of the stairwell. He could still hear an awful lot of noise, but it was hard to see anything through the smoke. Part of him wished he was out there causing chaos with the others—firing into the air, swinging a crowbar into the glass bar tops, defacing the walls and furniture. The damage would be repaired, but it would cost No Peak. It would humiliate them and make a statement that couldn’t be ignored. Bero scowled. He was more daring and thick-blooded than any of the others. He’d done things that would make those Oortokon mongrels piss themselves.

He pulled his head back into the stairwell and shut the door. He had nothing to prove by going out there. If the Green Bones showed up, they would smash the legs of the fools they caught. Enough close calls had made Bero value his limbs. At one time, he’d possessed jade of his own and enough shine to keep him flush with money, but that wasn’t the case anymore. He hated the clans, but he needed this job.

The door banged open and the three men staggered into the stairwell, their eyes wild and bright, hair sweaty and chests heaving for breath. Bero hurried with them back down to the parking level. He went out first, ducking behind a corner as the nearby elevator opened and disgorged half a dozen escaping floor and kitchen staff members. When they were gone, Bero hit the emergency stop button in the elevator to prevent it from going back up, then he let the men out of the stairwell. They tore off their masks and threw their gear into the suitcases. “Lie low for two weeks and meet back at the Little Persimmon,” Guriho reminded them as they got back into the van. The vehicle peeled out of the parking lot, leaving Bero alone.

Bero wheeled the suitcases and their damning contents to the garbage chute and dumped them. He made sure his employee uniform was straight and unstained, then he walked out of the parking lot and went on his regular lunch break. When he returned thirty minutes later, there were two police cars and a fire truck parked outside of the Double Double, as well as three No Peak Green Bones walking around, angrily surveying the damage. Stranded hotel guests shivered on the sidewalk, waiting to be let back into their rooms. Bero stuffed his hands into his pockets and waited with them, hiding his smile at the red message spray- painted across the interior width of the casino’s front glass doors: THE FUTURE IS CLANLESS. 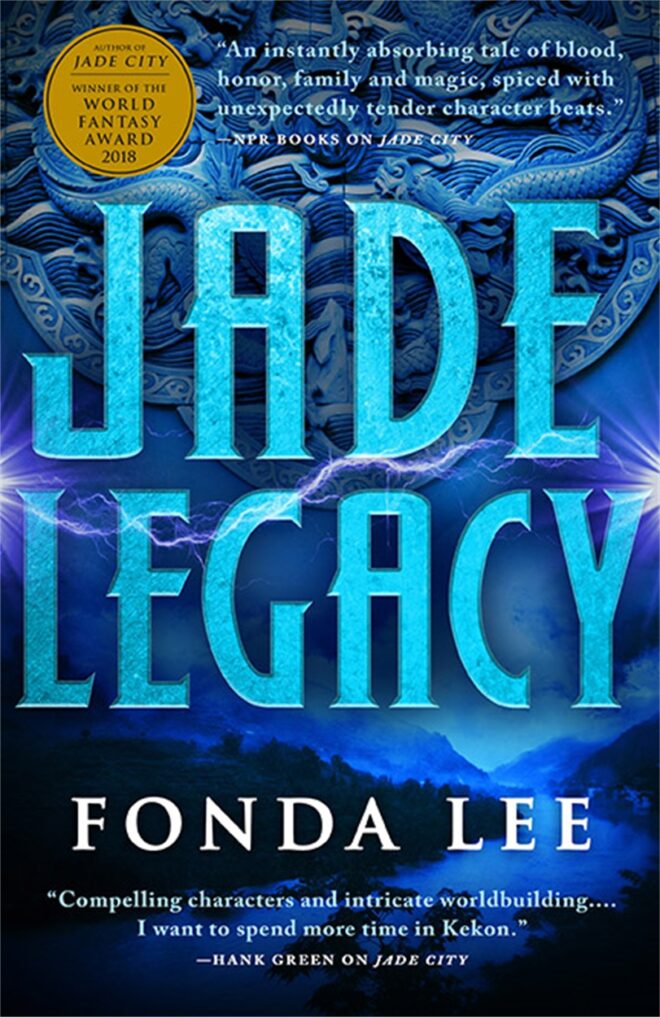 Fonda Lee is a black belt martial artist, a former corporate strategist, and action movie aficionado. Born and raised in Calgary, Canada, she now lives in Portland, Oregon with her family. Lee is the award-winning author of the YA science fiction novels Zeroboxer and Exo; Jade City was her adult debut.

“Lee’s astute world-building raises the stakes for her vivid and tautly described action scenes” Scott Lynch, author of The Lies of Locke Lamora

“OMG. Take my money. I have loved everything Fonda Lee has written and this new book has me salivating” Mary Robinette Kowal

“Fonda Lee’s stories do not pull their punches. They resonate with hard hits and fast revelations. At the same time, the bigger picture is always in view, and Lee’s stories are firmly in the realm of deeply introspective, fast-moving tales that will stay with the reader long after the book is done” Fran Wilde

“Stylish and action-packed, full of ambitious families and guilt-ridden loves, Jade City is an epic drama reminiscent of the best classic Hong Kong gangster films but takes place in a fantasy metropolis so gritty and well-imagined that you’ll forget you’re reading a book” Ken Liu, winner of the Hugo, Nebula, and World Fantasy Awards and author of The Grace of Kings and The Paper Menagerie and Other Stories