A Ghost on the Road

You’d have guessed from the size of his shadow that Clay Cooper was a bigger man than he was. He was certainly bigger than most, with broad shoulders and a chest like an iron-strapped keg. His hands were so large that most mugs looked like teacups when he held them, and the jaw beneath his shaggy brown beard was wide and sharp as a shovelblade. But his shadow, drawn out by the setting sun, skulked behind him like a dogged reminder of the man he used to be: great and dark and more than a little monstrous.

Finished with work for the day, Clay slogged down the beaten track that passed for a thoroughfare in Coverdale, sharing smiles and nods with those hustling home before dark. He wore a Watchmen’s green tabard over a shabby leather jerkin, and a weathered sword in a rough old scabbard on his hip. His shield—chipped and scored and scratched through the years by axes and arrows and raking claws—was slung across his back, and his helmet . . . well, Clay had lost the one the Sergeant had given him last week, just as he’d misplaced the one given to him the month before, and every few months since the day he’d signed on to the Watch almost ten years ago now.

A helmet restricted your vision, all but negated your hearing, and more often than not made you look stupid as hell. Clay Cooper didn’t do helmets, and that was that.

“Clay! Hey, Clay!” Pip trotted over. The lad wore the Watchmen’s green as well, his own ridiculous head-pan tucked in the crook of one arm. “Just got off duty at the south gate,” he said cheerily. You?”

“Nice.” The boy grinned and nodded as though Clay had said something exceptionally interesting instead of having just mumbled the word north. “Anything exciting out there?”

“It was probably a moose.”

The boy gave him a skeptical look, as if Ryk spotting a moose instead of a centaur was highly improbable. “Anyway. Come to the King’s Head for a few?”

Clay grunted, squinting into the sun and measuring the prospect of Ginny’s wrath against the bitter bite of ale washing down his throat. “Fine,” he relented. “One.”

Because it was hard work looking north all day, after all.

The King’s Head was already crowded, its long tables crammed with people who came as much to gab and gossip as they did to drink. Pip slinked toward the bar while Clay found a seat at a table as far from the stage as possible.

The talk around him was the usual sort: weather and war, and neither topic too promising. There’d been a great battle fought out west in Endland, and by the murmurings it hadn’t gone off well. A Republic army of twenty thousand, bolstered by several hundred mercenary bands, had been slaughtered by a Heartwyld Horde. Those few who’d survived had retreated to the city of Castia and were now under siege, forced to endure sickness and starvation while the enemy gorged themselves on the dead outside their walls. That, and there’d been a touch of frost on the ground this morning, which didn’t seem fair this early into autumn, did it?

Pip returned with two pints and two friends Clay didn’t recognize, whose names he forgot just as soon as they told him. They seemed like nice enough fellows, mind you. Clay was just bad with names.

“So you were in a band?” one asked. He had lanky red hair, and his face was a postpubescent mess of freckles and swollen pimples.

Clay took a long pull from his tankard before setting it down and looking over at Pip, who at least had the grace to look ashamed. Then he nodded.

The two stole a glance at each other, and then Freckles leaned in across the table. “Pip says you guys held Coldfire Pass for three days against a thousand walking dead.”

“I only counted nine hundred and ninety-nine,” Clay corrected. “But pretty much, yeah.”

“He says you slew Akatung the Dread,” said the other, whose attempt to grow a beard had produced a wisp of hair most grandmothers would scoff at.

Clay took another drink and shook his head. “We only injured him. I hear he died back at his lair, though. Peacefully. In his sleep.”

They looked disappointed, but then Pip nudged one with his elbow. “Ask him about the Siege of Hollow Hill.”

“Hollow Hill?” murmured Wispy, then his eyes went round as courtmark coins. “Wait, the Siege of Hollow Hill? So the band you were in . . .”

“Saga,” Freckles finished, clearly awestruck. “You were in Saga.”

“It’s been a while,” said Clay, picking at a knot in the warped wood of the table before him. “The name sounds familiar, though.”

“You gotta be kidding me,” Wispy uttered.

“You gotta be kidding me,” Wispy repeated, not one to be outdone when it came re‑expressing disbelief.

Clay said nothing in response, only sipped his beer and shrugged.

Another shrug. “I know Gabriel, yeah.”

“Gabriel!” trilled Pip, sloshing his drink as he raised his hands in wonderment. “ ‘Gabriel,’ he says! Classic.”

“And Ganelon?” Wispy asked. “And Arcandius Moog? And Matrick Skulldrummer?”

“Oh, and . . .” Freckles screwed up his face as he racked his brain—which didn’t do the poor bastard any favours, Clay decided. He was ugly as a rain cloud on a wedding day, that one. “Who are we forgetting?”

Wispy stroked the fine hairs on his chin as he pondered this. “Clay Cooper . . . oh,” he said, looking abashed. “Right.”

It took Freckles another moment to piece it together, but then he palmed his pale forehead and laughed. “Gods, I’m stupid.”

Sensing the awkwardness at hand, Pip chimed in. “Tell us a tale, will ya, Clay? About when you did for that necromancer up in Oddsford. Or when you rescued that princess from . . . that place . . . remember?”

Which one? Clay wondered. They’d rescued several princesses, in fact, and if he’d killed one necromancer he’d killed a dozen. Who kept track of shit like that? Didn’t matter anyway, since he wasn’t in the mood for storytelling. Or to go digging up what he’d worked so hard to bury, and then harder still to forget where he’d dug the hole in the first place.

“Sorry, kid,” he told Pip, draining what remained of his beer. “That’s one.”

He excused himself, handing Pip a few coppers for the drink and bidding what he hoped was a last farewell to Freckles and Wispy. He shouldered his way to the door and gave a long sigh when he emerged into the cool quiet outside. His back hurt from slumping over that table, so he stretched it out, craning his neck and gazing up at the first stars of the evening.

He remembered how small the night sky used to make him feel. How insignificant. And so he’d gone and made a big deal of himself, figuring that someday he might look up at the vast sprawl of stars and feel undaunted by its splendour. It hadn’t worked. After a while Clay tore his eyes from the darkening sky and struck out down the road toward home.

He exchanged pleasantries with the Watchmen at the west gate. Had he heard about the centaur spotting over by Tassel’s farm? they wondered. How about the battle out west, and those poor bastards holed up in Castia? Rotten, rotten business.

Clay followed the track, careful to keep from turning an ankle in a rut. Crickets were chirping in the tall grass to either side, the wind in the trees above him sighing like the ocean surf. He stopped by the roadside shrine to the Summer Lord and threw a dull copper at the statue’s feet. After a few steps and a moment’s hesitation he went back and tossed another. Away from town it was darker still, and Clay resisted the urge to look up again.

Best keep your eyes on the ground, he told himself, and leave the past where it belongs. You’ve got what you’ve got, Cooper, and it’s just what you wanted, right? A kid, a wife, a simple life. It was an honest living. It was comfortable.

He could almost hear Gabriel scoff at that. Honest? Honest is boring, his old friend might have said. Comfortable is dull. Then again, Gabriel had got himself married long before Clay. Had a little girl of his own, even—a woman grown by now.

And yet there was Gabe’s spectre just the same, young and fierce and glorious, smirking in the shadowed corner of Clay’s mind. “We were giants, once,” he said. “Bigger than life. And now . . .”

“Now we are tired old men,” Clay muttered, to no one but the night. And what was so wrong with that? He’d met plenty of actual giants in his day, and most of them were assholes.

Despite Clay’s reasoning, the ghost of Gabriel continued to haunt his walk home, gliding past him on the road with a sly wink, waving from his perch on the neighbour’s fence, crouched like a beggar on the stoop of Clay’s front door. Only this last Gabriel wasn’t young at all. Or particularly fierce looking. Or any more glorious than an old board with a rusty nail in it. In fact, he looked pretty fucking terrible. When he saw Clay coming he stood, and smiled. Clay had never seen a man look so sad in all the years of his life.

The apparition spoke his name, which sounded to Clay as real as the crickets buzzing, as the wind moaning through the trees along the road. And then that brittle smile broke, and Gabriel—really, truly Gabriel, and not a ghost after all—was sagging into Clay’s arms, sobbing into his shoulder, clutching at his back like a child afraid of the dark. 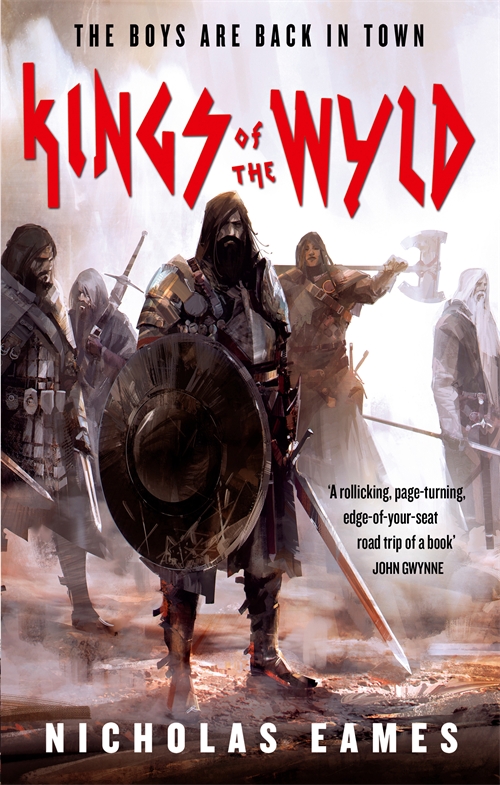 Nicholas Eames was born to parents of infinite patience and unstinting support in Wingham, Ontario. Though he attended college for theatre arts, he gave up acting to pursue the infinitely more attainable profession of “epic fantasy novelist”. Kings of the Wyld is his first novel. Nicholas loves black coffee, neat whiskey, the month of October and video games.  He currently lives in Ontario, Canada, and is probably writing at this very moment.

“An outstanding debut which will make you laugh and cry and hold your breath. This is a book that has it all” K. J. Parker

“Absolutely awesome. If the Beatles held a concert tomorrow (with all the necromancy required for that to happen), it still wouldn’t be as good a ‘getting the band back together’ story as this. Full of heroes, humour and heart” Jon Hollins, author of The Dragon Lords: Fool’s Gold

“It was a fantastic read, a rollicking, page-turning, edge-of-your-seat road-trip of a book. Great characters, loveable rogues that I genuinely cared about and all manner of fantastical monsters. All spiced with a sly sense of humour that had me smiling throughout. Wonderful” John Gwynne, author of Malice

“Kings of the Wyld took me back to my Dungeons and Dragons days. It has well-crafted characters long past their best but still fighting, non-stop fantasy action and welcome touches of humour. Great reading!” Ian Irvine