A startlingly unique and powerfully affecting novel from a remarkable up-and-coming voice in speculative fiction, this is the story of a lost generation and a boy who just wants to be one of us.

On the principal’s desk, a copy of Time. A fourteen-year-old girl smiled on the cover. Pigtails tied in blue ribbon. Freckles and big white teeth. Rubbery, barbed appendages extending from her eye sockets. Under that, a single word: WHY?

Why did this happen?

Or, maybe, why did the world allow a child like this to live?

What Dog wanted to know was why she smiled.

Maybe it was just reflex, seeing somebody pointing a camera at her. Maybe she liked the attention, even if it wasn’t the nice kind.

Maybe, if only for a few seconds, she felt special. The Georgia sun glared through filmy barred windows. A steel fan whirred in the corner, barely moving the warm, thick air. Out the window, Dog spied the old rusted pickup sunk in a riot of wildflowers. Somebody loved it once then parked it here and left it to die. If Dog owned it, he would have kept driving and never stopped.

The door opened. The government man came in wearing a black suit, white shirt, and blue-and-yellow tie. His shiny shoes clicked across the grimy floor. He sat in Principal Willard’s creaking chair and lit a cigarette. Dropped a file folder on the desk and studied Dog through a blue haze.

Dog growled when he talked but took care to form each word right. The teachers made sure he spoke good and proper. Brain once told him these signs of humanity were the only thing keeping the children alive.

Enoch was the name the teachers at the Home used. Brain said it was his slave name. Dog liked hearing it, though. He felt lucky to have one. His mama had loved him enough to at least do that for him. Many parents had named their kids XYZ before abandoning them to the Homes.

“I’m Agent Shackleton,” the government man said through another cloud of smoke. “Bureau of Teratological Affairs. You know the drill, don’t you, by now?”

Every year, the government sent somebody to ask the kids questions. Trying to find out if they were still human. Did they want to hurt people, ever have carnal thoughts about normal girls and boys, that sort of thing.

“Not this year,” the man told him. “This year is different. I’m here to find out if you’re special.”

Agent Shackleton planted his elbows on the desk. “You’re a ward of the state. More than a million of you. Living high on the hog for the past fourteen years in the Homes. Some of you are beginning to show certain capabilities.”

“I saw a kid once who had gills and could breathe underwater. Another who could hear somebody talking a mile away.”

“I never heard of such a thing,” Dog said.

“If you, Enoch, have capabilities, you could prove you’re worth the food you eat. This is your opportunity to pay it back. Do you follow me?”

Satisfied, Shackleton sat back in the chair and planted his feet on the desk. He set the file folder on his thighs, licked his finger, and flipped it open.

“Pretty good grades,” the man said. “You got your math and spelling. You stay out of trouble. All right. Tell me what you can do. Better yet, show me something.”

“You do for me, I can do plenty for you. Take you to a special place.”

Dog glanced at the red door at the side of the room before returning his gaze to Shackleton. Even looking at it was bad luck. The red door led downstairs to a basement room called Discipline, where the problem kids went.

He’d never been inside it, but he knew the stories. All the kids knew them. Principal Willard wanted them to know. It was part of their education.

He said, “What kind of place would that be?”

“A place with lots of food and TV. A place nobody can ever bother you.”

Brain always said to play along with the normals so you didn’t get caught up in their system. They wrote the rules in such a way to trick you into Discipline. More than that, though, Dog wanted to prove himself. He wanted to be special.

“That’s your special talent. You can run fast.”

“Real fast. Does that count?”

“Ask anybody how fast I run. Ask the—”

Shackleton’s smile disappeared along with Dog’s file. “I want you to get the hell out of my sight. Send the next monster in on your way out.” 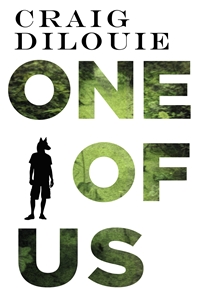 “Craig DiLouie’s One of Us is without a doubt one of the best books I’ll read this year . . .This book has The Island of Dr Moreau‘s social conscience, the X-men‘s imagination and Harper Lee’s heart. But it is DiLouie’s skill as a storyteller that blends all of that into a compelling work of near perfection” Bracken MacLeod, Bram Stoker Award-nominated author

“An amazing tour de force . . . One of Us rattled me to the core. An engrossing, emotionally-charged book and a work of terrible beauty. I loved it, heart and soul” John Dixon, Bram Stoker Award-winning author of Phoenix Island

“This is not a kind book, or a gentle book, or a book that pulls its punches. But it’s a powerful book and it will change you” Seanan McGuire

“One of Us is a powerful and heartbreaking tale about hate fear, and truth. Craig DiLouie is fearless as he explores the dark territory of the human heart” Jonathan Maberry, New York Times bestselling author

“Frightening in its familiarity, One of Us is a tale of human monsters and monstrous humans – authentic, brutal and inevitable” David Walton, internationally bestselling author of The Genius Plague