It’s a slow Tuesday afternoon, and you’re coming to the end of your shift on the West End control desk when Sergeant McDougall IMs you: Inspector wanted on FATACC scene.

“Jesus fucking Christ,” you subvocalize, careful not to let it out aloud—the transcription software responds erratically to scatology, never  mind eschatology—and wave two fingers at Mac’s icon. You can’t think of a reasonable excuse to dump it on D. I. Chu’s shoulders when he  comes on shift, so that’s you on the spot: you with your shiftend paper-work looming, an evening’s appointment with the hair salon, and your dodgy gastric reflux.

You push back your chair, stretch, and wait while Mac’s icon pulses, then expands. “Jase. Talk to me.”

“Aye, mam. I’m on Dean Park Mews, attendin’ an accidental death, no witnesses. Constable Berman was first responder, an’ she called me  in.” Jase pauses for a moment. There’s something odd about his voice, and there’s no video. “Victim’s cleaner was first on the scene, she had a wee panic, then called 112. Berman’s got her sittin’ doon with a cuppa in the living room while I log the scene.”

What he isn’t saying is probably more important than what he is, but in these goldfish-bowl days, no cop in their right mind is going to say  anything prejudicial over an evidence channel. “No ambulance?” You prod. “Have you opened an HSE ticket already?”

“Ye ken a goner when ye see wan.” McDougall’s Loanhead accent comes out to play when he’s a tad stressed. “I didna want to spread this’un around, skipper, but it’s a two-wetsuit job. I don’ like to bug you, but I need a second opinion . . .”

Wow, that’s something out of the ordinary. A two-wetsuit job means kinky beyond the call of duty. You look at the map and see his push-pin. It’s easy walking distance, but you might as well bag a ride if there’s one in the shed. “I was about to go off shift. If you can hold it together for ten minutes, I’ll be along.”

You glance sideways across the desk. Sergeant Elvis—not his name, but the duck’s arse fits his hair-style—is either grooving to his iPod or  he’s really customized his haptic interface. You wave at him, and he looks up. “I’ve got to head out, got a call,” you say, poking the  red-glowing hover-fly case number across the desktop in his direction. He nods, catches it, and drags it down to his dock. “I’m off duty in ten, so you’re holding the fort. Ping me if anything comes up.”

Elvis bobs his head, then does something complex with his hands. “Yessir, ma’am. I’ll take care of things, you watch me.” Then he drops back into his cocoon of augmented reality. You can see him muttering under his breath, crooning lyrics to a musically themed interface.  You sigh, then reach up, tear down the control room, wad it up into a ball of imaginary paper, and shove it across to sit in his desk. There’s a whole lot more to shift-end handover than that, but something tells you that McDougall’s case is going to take priority. And it’s down to the front desk to cadge a ride.

* * *
It’s an accident of fate that put you on the spot when Mac’s call came in; fate and personnel allocation policy, actually: all that, and politics beside.

You don’t usually sit in on the West End control centre, directing constables to shoplifting scenes and chasing hit-and-run cyclists. Nominally you’re in charge of the Rule 34 Squad: the booby-prize they gave you for backing the wrong side in a political bun-fight five   years ago.

But policing is just as prone to management fads as any other profession, and it’s Policy this decade that all officers below the rank of chief inspector must put in a certain number of Core Community Policing hours on an annual basis, just to keep them in touch with Social Standards (whatever they are) and Mission-Oriented Focus Retention (whatever that is). Detective inspector is, as far as Policy is  concerned, still a line rank rather than management.

And so you have to drag yourself away from your office for eight hours a month to supervise the kicking of litter-lout ass from the  airconditioned comfort of a control room on the third floor of Fettes Avenue Police HQ. It could be worse: At least they don’t expect you to pound the pavement in person. Except Jason McDougall has called you out to do some rare on-site supervision on—

It’s not as if its like isnae well-known in Edinburgh, city of grey stone propriety and ministers stern and saturnine (with the most surprising personal habits). But propriety—and the exigencies of service under the mob of puritanical arseholes currently in the ascendant in Holyrood—dictates discretion. If Jase is calling it openly, it’s got to be pretty blatant. Excessively blatant. Tabloid grade, even.

Enough of that. Let’s see if we can blag a ride, shall we? 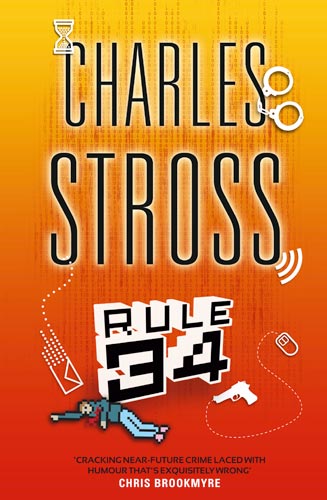 Award-winning British author Charles Stross has become a force to be reckoned with in recent years as his profile continues to grow. He is seen as go-to commentator on all manner of SF and technological issues, he’s vocal online and incredibly well connected. He has also had fantastic critical acclaim for his intelligent and often witty SF works. Charles was born in Leeds, England, in 1964. He has worked as a pharmacist, software engineer and freelance journalist, but now writes full-time. You can find his popular website at http://www.antipope.org/.