Blue lights flashed off the undersides of leaves. Off the tall brick buildings. Off the stoic faces of New York’s finest. The cops formed a tight circle around a tarp-covered body next to a Dumpster. Its lid gaped open like the mouth of a shell-shocked witness.

After three months on a steady diet of bagged blood, the aroma of a fresh human kill hooked me by the nose and dragged me toward the crime scene. The humans around me could smell the stink of trash and acid rain and gritty city. But they couldn’t detect the coppery scent that made my fangs throb against my tongue.

Bright yellow police tape cordoned off the entrance to the park. Spectators gathered in a tight clutch on the sidewalk along Central Park West. Their morbid curiosity clung to their faces like Greek tragedy masks.

But the blood called to me.

A male in a black Windbreaker with the word CORONERon the back lifted the tarp. His expression didn’t change as he surveyed the carnage. He looked up to address the detective and uniformed cops waiting to hear his verdict. “Anyone located the dick?”

A young patrolman lurched his head over the side of the steel box and vomited.

“Hey, rookie, you contaminate my crime scene and I’ll give you something to puke about.”

The white-faced recruit wiped his mouth with his arm. Raised a gloved hand. “Found it.”

“What’s that he’s got there?” The question came from a blue-hair standing next to me.

All around people started voicing guesses.

I bit my lip. Giguhl was going to be so mad he missed this. If he’d been there with me, the Mischief demon probably would have said something like, “Sabina, dicks in Dumpsters are no laughing matter.” Then he’d move closer for a better look.

But Giguhl wasn’t there. He was waiting for me to get home. I should go—

The coroner knelt next to the body and frowned. “That’s odd.”

I halted my exit, curious despite my best intentions.

“Dick-ectomies usually are,” the detective replied.

The coroner ignored the joke and frowned. “Considering the extent of the wounds, there should be a lot more blood.”

“You think he was killed somewhere else and dumped here?” the rookie asked.

“Negative.” The detective shook his head. “There are signs of struggle over there.” He pointed to the tree line, where stubs of broken branches littered the ground.

“There’s blood spatter over there, too,” the coroner said, rising. “Just not enough for an arterial wound like this.” He sighed and put his hands on his hips. He scanned the area, as if searching for the answer—or the perp—among the crowd. When that gaze landed on me, I stifled the urge to shy away. To pull my collar higher and duck my head so he wouldn’t see the guilt on my face. But then I remembered that, while I shouldn’t be there, I wasn’t responsible for the human’s death.

But given everything I’d just heard, I knew who was. Or rather, what was responsible.

And a clumsy one at that. Slade was going to be pissed. Especially if the vamp was a new arrival who hadn’t bothered to pay the blood tax. Either way, once Slade found out, there’d be a reckoning. I almost wished I could be there with a bowl of popcorn when he found the guilty party.

But he definitely wasn’t going to hear about the botched kill from me. Vampire politics weren’t my business.

A siren demanded attention. The crowd split apart, their eager eyes tracking the arrival of the medical examiner’s van. As I backed away, the phone in my pocket vibrated. Fishing it out, I glanced at the screen.

Ogling a crime scene. “Across the street.”

“Tell him to chill. The concert doesn’t start for an hour.”

In the background, I heard Giguhl’s deep voice asking if it was me on the phone. Adam affirmed the demon’s suspicion. “Tell that misbegotten daughter of Lilith to get her scrawny ass home already. I don’t want to miss Pussy Willow’s opening number!”

Guilt made me cringe. I should already have been up in that apartment, preparing to head out to Vein. Instead, I was standing in a crowd of mortals eyeing a crime scene like a voyeur. “I’ll be up in a sec.”

My stomach jumped. Surprising how those three little words could still pack such a punch. “You too.” I clicked the END button and shoved the phone back in my pocket.

The coroner watched his assistant load the body into a black bag. I couldn’t get past the feeling that the bag looked a lot like one used to collect trash. For some reason the sight made me feel . . . heavy. Like someone had thrown away a perfectly good life.

I shook my head to clear away the maudlin thoughts. I had a date with a hot mage, a Mischief demon, and a drag queen fae to get to. With a sigh, I turned my back on the bagged body, the eager bystanders, and the scent of blood.

A block or so ahead and across the street, the spires and turrets of Prytania Place loomed. To some, the mage fortress with its gray stone and gargoyles might seem macabre, a Gothic anachronism crouching sullenly between ambitious skyscrapers. But the warm golden lights beaming from all those arched windows and the promise of friendly mage faces waiting inside called me home.

As I walked, bright night eyes peeked from between the leaves and branches of Central Park’s tree line, beckoning me like crooked fingers toward memories of darker times. Back when using humans like fast food was standard operating procedure and my motto was “kill first, avoid questions later.”

But that was then. Now, I shook off the cold fingers of those shadow memories. That old life was over. I was happy now. Settled. Safe. I’d left the cold, blood-soaked world behind in favor of one filled with warmth and magic.

I finally reached the gates set into the base of the building. Entered my code, scanned my hand, spoke into the intercom. The gate popped open and I slipped inside. But I couldn’t resist turning for one last glimpse of the commotion.

A flash of red hair down the block caught my eye. I took a step forward for a better view. She turned her head, giving me a clear view of her face. I didn’t recognize her, but she was definitely a vampire. If the hair hadn’t been a dead giveaway, the smile on her face as she watched the scene told me everything I needed to know. Yes, she was definitely a vamp, but was she also the murderer?

I felt eyes on me, a palpable but unmistakable sensation. Figuring the chick had spotted me, I kept my eyes averted. Acknowledging her presence would be asking for trouble.

Instead, I focused my gaze across the street, where the coroner and his assistant hefted the body bag into their van. Somewhere in the city, a roommate or a partner or a mother expected that dead guy home at any minute. My stomach cramped at the thought of some gray-haired woman learning that her son had been slaughtered and left to rot like garbage. To her, only a monster could discard human life so carelessly. And she’d be right.

Funny. I never used to think of vampires as monsters. Back when I lived as one, human life was no more valuable than a Big Mac. I gripped the small cooler in my hand tighter. The bagged blood inside was more than just sustenance. It represented my new life among the mages, one where I’d learned to control my baser instincts.

So why did my fangs still throb? 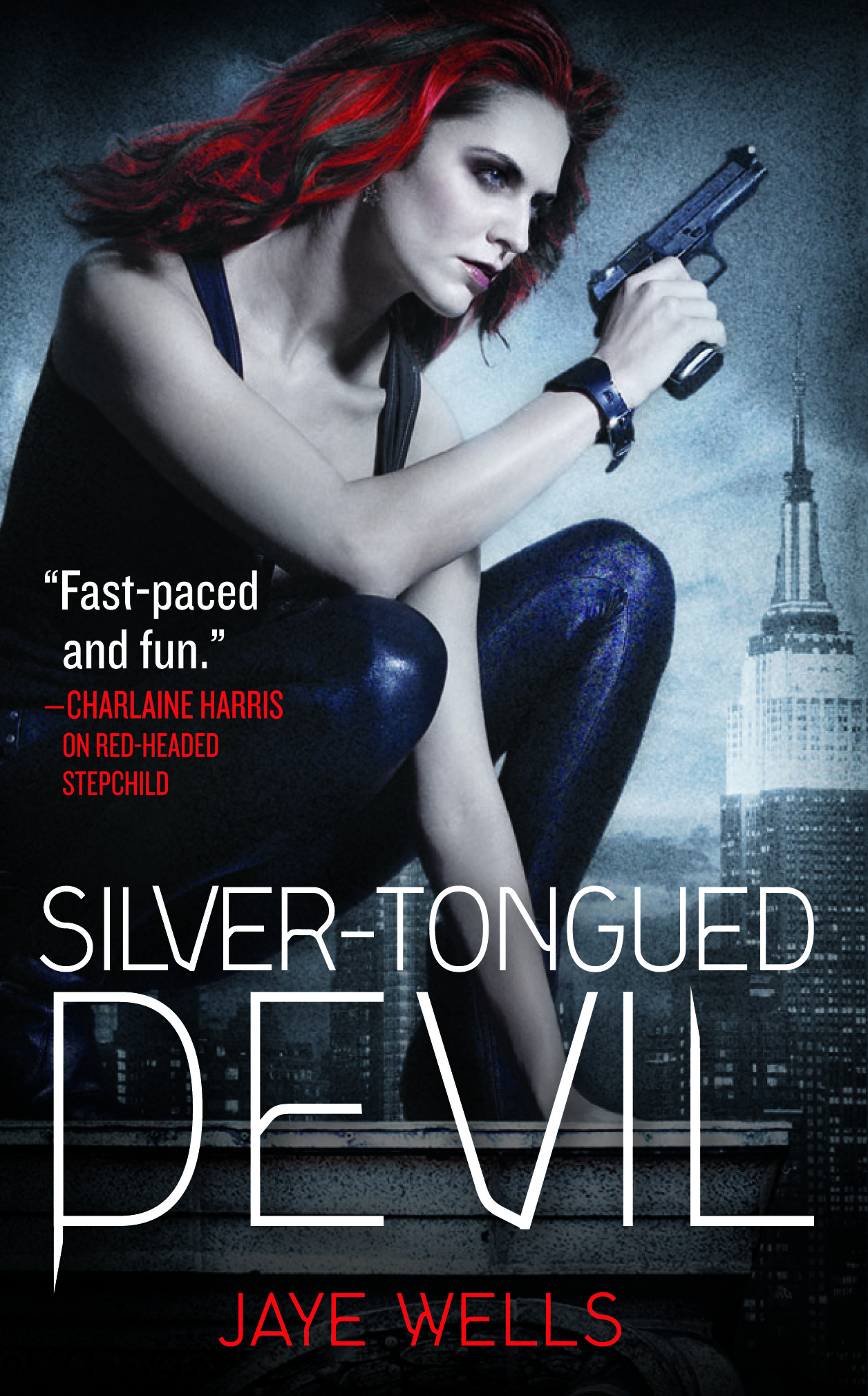 Raised in Texas, Jaye Wells grew up reading everything she could get her hands on. Her penchant for daydreaming was often noted by frustrated teachers.  She embarked on a series of random career paths, including stints working for a motivational speaker and at an art museum. Jaye eventually realized that while she loved writing, she found facts boring. So, she left all that behind to indulge her overactive imagination and make stuff up for a living. Besides writing, she enjoys travel, art, history, and researching weird and arcane subjects. She lives in Texas with her saintly husband and devilish son.