The start of a new blockbuster epic fantasy series, set in a world inspired by pre-Colonial West African empires, Son of the Storm is perfect for fans of Brent Weeks, Evan Winter and James Islington.

The Weary Sojourner Caravansary stood at the corner of three worlds.

For a multitude of seasons before Oke was born, the travelhouse had offered food, wine, board, and music—and for those who had been on the road too long, companionship—to many a traveller across the Savanna Belt. Its patronage consisted solely of those who lugged loads of gold, bronze, nuts, produce, textile, and craftwork from Bassa into the Savanna Belt or, for the even more daring, to the Idjama desert across Lake Vezha. On their way back, they would stop at the caravansary again, the banana and yam and rice loads on their camels gone and now replaced with tablets of salt, wool, and beaded ornaments.

But there was another set of people for whom the caravansary stood, those whose sights were set on discovering the storied isthmus that connected the Savanna Belt to the yet‑to‑be‑sighted seven islands of the archipelago. For people like these, the Weary Sojourner stood as something else: a vantage point. And for people like Oke who had a leg in all three worlds, walking into the Weary Sojourner called for an intensified level of alertness.

Especially when the fate of the three worlds could be determined by the very meeting she was going to have.

She swung open the curtain. She did not push back her cloak.

Like many public houses in the Savanna Belt, the Weary Sojourner operated in darkness, despite it being late morning. During her time in the desertlands, Oke had learned that this was a practice carried over from the time of the Leopard Emperor when liquor was banned in its desert protectorates, and secret houses were operated under the cover of darkness. Even though that period of despotism was thankfully over, habitual practices were difficult to shake off. People still preferred to drink and smoke and fuck in the dark.

Which made this the perfect place for Oke’s meeting.

She took a seat at the back and surveyed the room. It was at once obvious that her contact wasn’t around. There were exactly three people here, all men who had clearly just arrived from the same caravan. Their clothes gave them away: definitely Bassai, in brightly coloured cotton wrappers, bronze jewellery—no sensible person travelled with gold jewellery—over some velvet, wool, and leatherskin boots for the desert’s cold. Senior members of the merchantry guild, looking at that velvet. Definitely members of the Idu, the mainland’s noble caste. Guild aside, their complexions also gave that away—high-black skin, as dark as the darkest of humuses, just the way Bassa liked it. It was the kind of complexion she hadn’t seen in a long time.

Oke swept aside a nearby curtain and looked outside. Sure enough, there was their caravan, parked behind the establishment, guarded by a few private Bassai hunthands. Beside them, travelhands—hired desert immigrants to the mainland judging by their complexions, what the Bassai would refer to as low-brown for how light and lowly it was—unpacking busily for an overnight stay and unsaddling the camels so they could drink. There were no layers of dust on anyone yet, so clearly they were northbound.

Oke looked up at the housekeep, who had come over, wringing his hands in a rag. She could see little of his face, but she had been here twice before, and knew enough of what he looked like.

“Palm wine and jackalberry with ginger,” she said, hiding her hands.

The housekeep stopped short. “Interesting choice of drink.” He peered closer. “Have you been here before?” He enunciated the words in Savanna Common in a way that betrayed his border origins.

Oke’s eyes scanned him and decided he was asking this innocently. “Why do you ask?”

“You remember things, as a housekeep,” he said, leaning back on a nearby counter. “Especially drink combinations that join lands that have no place joining.”

“Consider it an acquired taste,” Oke said, and looked away, signalling the end of the discussion. But to her surprise, the man nodded at the group far away and asked, in clear Mainland Common:

Oke froze. He had seen her complexion, then, and knew enough to know she had mainland origins. What had always been a curse for Oke back when she was a mainlander—Too light, is she punished by Menai? people would ask her daa—had become a gift in self-exile over the border. But there were a few people with keen eyes and ears who would, every now and then, recognise a lilt in her Savanna Common or note how her hair curled a bit too tightly for a desertlander or how she carried herself with a smidgen of mainlander confidence. There was only one way to react to that, as she always did whenever this came up.

“What?” She frowned. “Sorry, I don’t understand that language.”

The housekeep eyed her for another moment, then went away.

Oke breathed a sigh of relief. It was of the utmost importance that no one knew who she was and what she was doing here, living in the Savanna Belt. Because the history of the Savanna Belt was what it was, a tiny enough number of people who originated from this side of the Soke border looked just a bit like she did. Passing as one was easier once she perfected the languages. Thank moons she had studied them as a scholar in Bassa.

She drank slowly once the housekeep brought her order, and she put forward some cowries, making sure to add a few pieces to clearly signal she wanted to be left alone.

Halfway through her drink, she realised her contact was running late. She looked outside again. The sky had gone cloudy, and the sun was missing for a while. She went back to her drink and nursed it some more.

The men in the room rose and went up to be shown to their rooms. Oke peeked out of the curtain again. The travelhands were gone. One hunthand stood and guarded the caravan. One stood at the back door to the caravansary. The camels still stood there, lapping water.

Oke ordered another drink and waited. The sun came back out. It was past an hour now. She looked out again. The camels had stopped drinking and now lay in the dust, snoozing.

Oke got up without touching her new drink, put down some more cowries on the counter in front of the housekeep, and walked to the front door of the caravansary. On second thought, she turned and went back to the housekeep.

“Your alternate exit. Show me.”

The man pointed without looking at her. Oke took it and went around the building, evading both the men and the animals. She eventually showed up to where she had left her own animal—a kwaga, a striped beauty with tiny horns. She untied and patted it. It snorted in return. Then she slapped its hindquarters and set it off on a run, barking as it went.

She waited for a moment or two, then dashed away herself.

Going through a secluded route on foot, while trying to stay as nondescript as possible, took a long time. Oke had to take double the usual precautions, as banditry had increased so much on the trade routes that one was more likely to get robbed and murdered than not. Back when Bassa was Bassa—not now with its heavily diluted population and generally weakening influence—no one would dare attack a Bassai caravan anywhere on the continent for fear of retaliation. These days, every caravan had to travel with private security. The Bassai Upper Council was well known for being toothless and only concerned with enriching themselves.

The clouds from earlier had disappeared, and the sun beat mercilessly on her, causing her to sweat rivers beneath her cloak, but Oke knew she had done the right thing. It was as they had agreed: If either of them got even a whiff of something off, they were to make a getaway as swiftly as possible. She was then to head straight for the place nicknamed the Forest of the Mist, the thick, uncharted woodland with often heavy fog that was storied to house secret passages to an isthmus that connected the Savanna Belt to the seven islands of the eastern archipelago.

It didn’t matter any longer if that bit of desertland myth was true or not. Whether the archipelago even still existed was moot at this point. The yet undiscovered knowledge she had gleaned from her clandestine exploits in the library at the University of Bassa, coupled with the artifacts her contact was bringing her—if either made it into the wrong hands, the whole continent of Oon would pay for it. Oke wasn’t ready to drop the fate of the continent in the dust just yet.

Two hours later, Oke looked back and saw in the sky the grey tip of what she knew came from thick, black smoke. Not the kind of smoke that came from a nearby kitchen, but the kind that said something far away had been destroyed. Something big.

She took a detour in her journey and headed for the closest high point she knew. She chose one that overlooked a decent portion of the savanna but also kept her on the way to the Forest of the Mist. It took a while to ascend to the top, but she soon got to a good enough vantage point to look across and see the caravansary.

The Weary Sojourner stuck out like an anthill, the one establishment for a distance where the road from the border branched into the Savanna Belt. The caravansary was up in flames. It was too far for her to see the people and animals, but she knew what those things scattering from the raging inferno were. The body language of disaster was the same everywhere.

Oke began to descend fast, her chest weightless. The Forest of the Mist was the only place on this continent where she would be safe now, and she needed to get there immediately. Whoever set that fire to the Weary Sojourner knew who she and her contact were. Her contact may or may not have made it out alive. It was up to her now to ensure that the continent’s biggest secret was kept that way.

The alternative was simply too grave to consider. 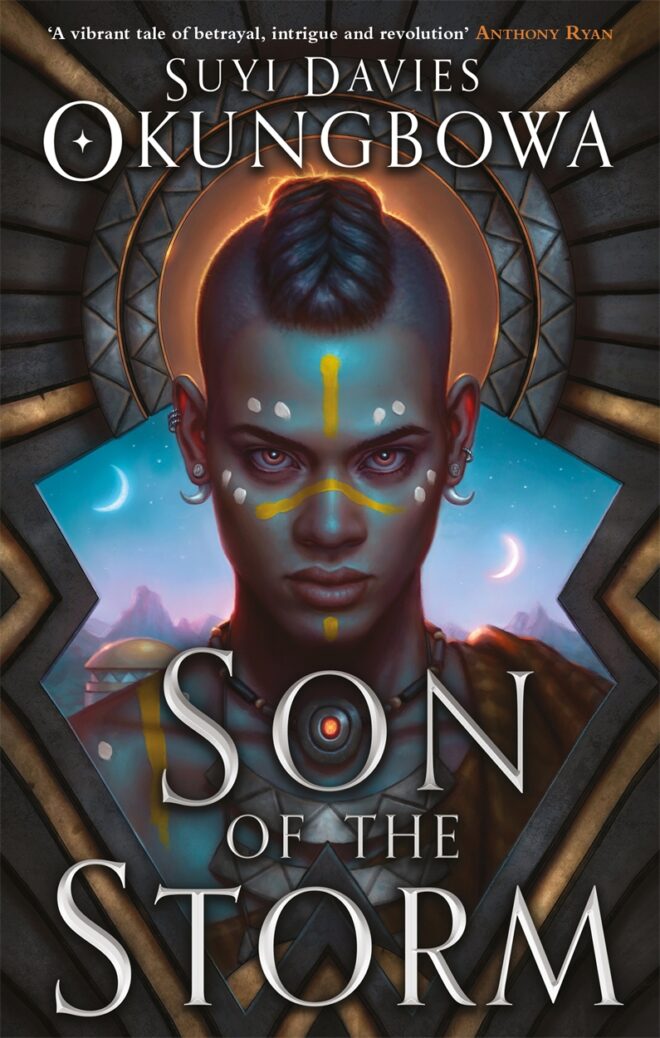 Suyi Davies Okungbowa is a Nigerian author of speculative fiction inspired by his West African origins. He is the author of David Mogo, Godhunter, and his shorter works have appeared in Lightspeed, Nightmare, Strange Horizons and other periodicals and anthologies. He lives between Lagos, Nigeria and Tucson, Arizona, where he teaches writing while completing his MFA in creative writing. He tweets at @IAmSuyiDavies and is @suyidavies everywhere else.