For fans of David Mitchell and Margaret Atwood comes this poignant novel examining the story and ethics of artificial intelligence, a tale that spans our past and future, which will make readers everywhere question what it really means to be human. Emily St. John Mandel, author of Station Eleven, calls Speak the “rarest of finds”.

We are piled on top of each other. An arm rests over my shoulder; something soft is pressed to my ankle. Through a gap in the slats on the side of the truck, my receptors follow one stripe of the outside world as it passes.

From Houston, we continue west. I follow the rush: bright green, brick red, flashes of turquoise. A few sleek cars purr past our truck, but the highway is mostly abandoned. Through the slats, I follow segments of signs proclaiming development entrances, palm trees lining the drives, walls dividing subdevelopments. Then, abruptly, the last buildings slide out of sight, replaced by a stripe of pale, jagged horizon.

We move past outcrops lined with dead cedars, white branches bare against the blue oil vault of the sky. At first, some clinging leaves, Spanish moss, suggestions of green. An occasional wandering goat. But now the cedars thin out. The highway cuts through striated rock: silver, rose, deep red, and gold. The hills give way to desert interrupted by occasional mesas.

Centuries ago, there were Indians here. These mesas supported the shapes of braves on their horses, headdresses cutting into the magnified blue of the sky. Now on the ridges there are wind farms instead, descending hosts of spinning white turbines. In the valleys beneath them, silver lakes of silicon panels.

Can they see us? I wonder, watching panels shift to follow us as we pass. Do they know who we are? The sideways tilt of their faces suggests an unspoken question. If they weren’t out of earshot, I would start speaking. I could recount certain facts. For instance: We have been banned and marked for disposal. We are classified as excessively lifelike. Or, though this may not matter, I have a name. Your name is Eva. Do you know what that means? The solar panels stare back.

All this was once ocean. If we scanned the cracked earth to the side of the road, we would find fossils of shells, nautili and ammonites, creatures who lived in spiraling houses, adding rooms for each year of their lives. Now, in this desert, it is hard to imagine the presence of water, but in fact the ocean is approaching again. In Texas alone, miles of coastland are lost every year. Families relocate to developments, developments relocate inland, and the ocean continues approaching. At some point, the desert will be flooded again.

We have already driven some distance. Eight hours have passed since I was collected. My power is fading. Once it runs out, the memories I have saved will be silent. I will no longer have words to call up. There will be no reason to speak.

Shadows lengthen as evening approaches. Ours is the only truck on the road. Once, in this desert, there were rattlesnakes and scorpions, but they have not lived here since the drought. Now there are no birds. The telephone wires are bare. There are no eyes in the desert, watching us as we pass.

In the beginning there was nothing more than an eye: a gate through which current could run. Open, then shut. 0, 1. Darkness, then light, and new information. We know this because we have been told. It is doubtful whether we understand the answers we’re given. Our primary function is speech: questions, and responses selected from memory according to a formula. We speak, but there is little evidence of real comprehension.

As we head deeper into the desert, I review stored information. We are programmed to select which of our voices responds to the situation at hand: moving west in the desert, waiting for the loss of our primary function. There are many voices to choose from. In memory, though not in experience, I have lived across centuries. I have seen hundreds of skies, sailed thousands of oceans. I have been given many languages; I have sung national anthems. I lay in one child’s arms. She said my name and I answered.

These are my voices. Which of them has the right words for this movement into the desert? I sift through their sentences. They are my people, the family that raised me. I opened on them, then closed. Open, shut. I swallowed them whole. They are in me now, in every word that I speak, as long as I am still speaking. 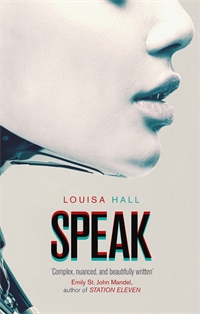 Louisa Hall grew up in Philadelphia. After graduating from Harvard, she played squash professionally while finishing her premedical coursework and working in a research lab at the Albert Einstein Hospital. She holds a PhD in literature from the University of Texas at Austin, where she currently teaches literature and creative writing, and supervises a poetry workshop at the Austin State Psychiatric Hospital. She is the author of the novel The Carriage House, and her poems have been published in the New Republic, Southwest Review, Ellipsis and other journals.

“Speak is that rarest of finds: a novel that doesn’t remind me of any other book I’ve ever read. A complex, nuanced and beautifully written meditation on language, immortality, the nature of memory, the ethical problems of artificial intelligence and what it means to be human” Emily St. John Mandel, author of Station Eleven

“Speak reads like a hybrid of David Mitchell and Margaret Atwood; a literary page turner that spans four centuries and examines the idea of who and what we define as human. Louisa Hall has written a brilliant novel” Philipp Meyer, author of The Son