He watched the girl stumble from the motel office, room key glinting under the harsh lights of the  parking lot. Lightning flashed, illuminating her fi gure. Tall and slender, barely more than a teen, too young to be out alone in a place like this, on a night like this.

Thunder rumbled and crashed. The parking lot lights flickered and buzzed. Sheets of ice-cold rain battered the girl. She kept walking, oblivious, as her long hair whipped against her face.

So young. So confident. So foolish.

The girl stopped at her room and jammed the key into the lock. When it didn’t work the first time, she  cast an unlock spell. The door swung open. She staggered inside.

So young. So powerful. And, at this moment, so broken.

Perhaps he could use that.

The girl had just solved the murders of three young women in a nearby town. On the surface, the deaths were unremarkable. Humans killed each other all the time. As it turned out, the first two fit the usual pattern—pointless deaths, tragic for a few, meaningless to everyone else. The third was different. She’d been killed by a half-demon spirit, escaped from her hell dimension. A mere shade should not be able to do such a thing. But the halfdemon had help, powerful help, and her escape was yet another sign that what he’d foreseen was inevitable.

For years, mortal supernaturals had whispered about signs and portents. The impossible becoming  possible. Humans learning magic. New races evolving within a generation. Bitten werewolves passing their genes to their offspring. A clairvoyant of unsurpassed power, born from a dead mother. As one who had observed for millennia, he knew these were not new occurrences. Merely rare. Yet with so many in quick succession, even the demonic and the celestial had taken note. Some believed. Others did not, but saw opportunity in the growing unrest.

Now mortal supernaturals who believed the signs were coalescing under one man. A man with a dream that could change the world. Or destroy it. The demonic and the celestial took note of that, too. They  whispered. They conspired. They chose a side.

The girl in the motel room knew nothing of this. She’d sent the half-demon shade back to her hell and considered the matter closed, except for the details that obsessed her now, ones that had nothing to do with the gathering storm.

Before the half-demon shade was banished from the living world, she’d exacted revenge by telling the  authorities who had killed the first two young women—the mother of one. It had been accidental. A  struggle, the gun goes off. It concerned him not at all. But it did concern the girl in the motel room. She’d been the one who learned the truth. The half-demon shade simply acted on her findings.

It mattered not a whit in the larger scheme of things. In a few days, the girl in the motel room would be swept into the maelstrom brewing in the supernatural world. She would play a role. A critical role. A  dangerous role.

Now inside the room, the girl flicked on the light, only to have it go out again as the power failed. She cast a light ball.

Thank God for my spells, he heard her think.

She paused then and images flickered through her mind. Images of the accused woman and the  orphaned child. Of the girl’s own mother and father, whose long-ago deaths she felt responsible for. Of a man she’d begun to care for, killed by the half-demon shade.

Then a clear thought. If I could fix even one thing, and give Kayla back her grandmother, I’d gladly give up my powers.

He smiled. Yes, he could definitely use that. 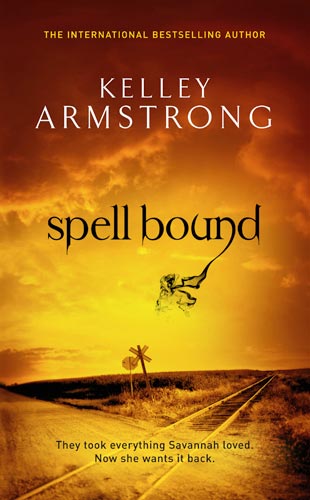