In this this science fiction spy thriller by Hugo Award-winning writer Charles Stross, the Laundry – the British secret agency that fights supernatural threats – must team up with the police force, with one unfortunate secret agent caught in the middle.

Please allow me to introduce myself . . .

No. Strike that. Period stop backspace backspace bloody computer no stop that stop listening stop dictating end end oh I give up.

Will you stop doing that?

Starting all over again (typing this time: it’s slower, but dam speech recognition and auto-defect to Heckmondwike):

My husband is sometimes a bit slow on the uptake; you’d think that after ten years together he’d have realized that our relationship consisted of him, me, and a bone-white violin made for a Mad Scientist by a luthier-turned-necromancer. But no: the third party in our ménage à trois turns out to be a surprise to him after all these years, and he needs more time to think about it.

Bending over backwards to give him the benefit of the doubt, this has only become an issue since my husband acquired the ability to see Lecter—that’s what I call my violin when I argue with him*—for what he is. (He. She. It. Whatever.) Bob is very unusual in having lately developed this ability: it marks him as a member of a privileged elite, the select club of occult practitioners who can recognize what they’re in the presence of and stand fast against it rather than fleeing screaming into the night. Like the Vampire Bitch from Human Resources, and what was she doing in the living room at five o’clock in the morning—?

My name is Mo; that’s short for Dominique O’Brien. I’m forty-three years old, married to a man who calls himself Bob Howard, aged thirty-eight and a quarter. We are currently separated while we try to sort things out—things including, but not limited to: my relationship with my violin, his relationship with the Vampire Bitch from Human Resources, and the End Of The World As We Know It (which is an ongoing work-related headache).

This is my introduction to my work journal during OPERATION INCORRIGIBLE, and the period immediately before and after it. We’re supposed to keep these journals in order to facilitate institutional knowledge retention in event of our death in the line of duty. And if you are reading it, you are probably a new Laundry recruit and I am probably not on hand to brief you in person because I’m dead.

Now, you might be wondering why this journal is so large. I could soft-soap you and claim that I just wanted to leave you with a full and balanced perspective on the events surrounding OPERATION INCORRIGIBLE—it’s certainly a valid half-truth—but the real reason is that I’ve been under a lot of stress lately. Nervous breakdowns are a luxury item that we don’t have time for right now, and anyway, all our security-cleared therapists are booked up eight months in advance: so the only psychotherapy I’m getting is the DIY kind, and pouring it all out into a private diary that’s going to be classified up to its armpits and buried in a TOP SECRET vault guarded by security zombies until I’m too dead to be embarrassed by it seemed like a good compromise. So I wrote it this way, and I don’t have the time (or inclination, frankly) to go back and take all the personal stuff out: duty calls, etcetera, and you’ll just have to suck it up.

If I were Bob, this journal would probably claim to be written by “Sabine Braveheart” or some such nonsense, but after OPERATION INCORRIGIBLE my patience with silly pseudonyms is at an all-time low. So I’ll use pseudonyms where necessary to protect high-clearance covert assets, and for people who insist on hiding under rocks—yes, Bob, if you’re reading this I’m talking about you—but the rest of the time I’ll call a spade a bloody shovel, not EARTHMOVER CRIMSON VORTEX.

Anyway, you got this far so let me finish the prelude to the intro by adding that if you can get past all the Bridget Jones meets The Apocalypse stuff you might pick up some useful workplace tips. (To say nothing of the juicy office gossip.)

Now, to the subject matter at hand (feel free to skip the rest of this foreword if you already know it all):**

Bob and I are operatives working for an obscure department of the British civil service, known to its inmates—of whom you are now one—as the Laundry. We’re based in London. To family and friends, we’re civil servants; Bob works in IT, while I have a part-time consultancy post and also teach theory and philosophy of music at Birkbeck College. In actual fact, Bob is a computational demonologist turned necromancer, and I am a combat epistemologist. (It’s my job to study hostile philosophies, and disrupt them. Don’t ask; it’ll all become clear later.)

I also play the violin.

A brief recap: magic is the name given to the practice of manipulating the ultrastructure of reality by carrying out mathematical operations. We live in a multiverse, and certain operators trigger echoes in the Platonic realm of mathematical truth, echoes which can be amplified and fed back into our (and other) realities. Computers, being machines for executing mathematical operations at very high speed, are useful to us as occult engines. Likewise, some of us have the ability to carry out magical operations in our own heads, albeit at terrible cost.

Magic used to be rare and difficult and unsystematized. It became rather more common and easy and formal after Alan Turing put it on a sound theoretical footing at Bletchley Park during the war: for which sin, our predecessors had him bumped off during the 1950s. It was an act of epic stupidity; these days people who rediscover the core theorems are recruited and put to use by the organization.

Unfortunately, computers are everywhere these days—and so are hackers, to such an extent that we have a serious human resources problem, as in: too many people to keep track of. Worse: there are not only too many computers, but too many brains. The effect of all this thinking on the structure of spacetime is damaging—the more magic there is, the easier magic becomes, and the risk we run is that the increasing rate of thaum flux over time tends to infinity and we hit the magical singularity and ordinary people acquire godlike powers as spacetime breaks down, and then the ancient nightmares known as the Elder Gods come out to play. We in the Laundry refer to this apocalyptic situation as CASE NIGHTMARE GREEN, and it is the most immediate of the CASE NIGHTMARE RAINBOW scenarios—existential threats to the future survival of the human species. The bad news is, due to the population crisis we’ve been in the early stages of NIGHTMARE GREEN for the past few years, and we are unlikely to be safe again before the middle of the 22nd century.

And so it is that Bob and I live a curious double life—as boring middle-aged civil servants on the one hand, and as the nation’s occult security service on the other.

Which brings me to the subject of OPERATION INCORRIGIBLE.

I’m supposed to give you a full and frank account of OPERATION INCORRIGIBLE. The trouble is, my experience of it was colored by certain events of a personal nature, and although I recognize that it’s highly unprofessional to bring one’s private life into the office, not to mention potentially offensive and a violation of HR guidelines on respect for diversity and sexual misconduct, I can’t let it pass.

Bluntly: Bob started it, and I really can’t see any way to explain what went wrong with OPERATION INCORRIGIBLE without reference to the Vampire Bitch from HR, not to mention Her With The Gills. Or the Mayor, the nude sculpture on the Fourth Plinth, and how I blew my cover. Also: the plague of superheroes, what it’s like to have to set up a government agency from scratch during a crisis, and the truth about what it was like to be a member of the official Home Office superhero team. And finally, the truth about my relationship with Officer Friendly.

So, Bob—Bob? I know you’re reading this—you’d better tell HR to get on the phone to RELATE and find us a marriage guidance counselor with a security clearance.

Because this is what happened, really and truly.

* Lecter is not my violin’s true name. I am not going to tell you its true name, because the aphorism “true names have power,” while technically correct, is wildly misleading, and not in a good way. In the case of my violin, Lecter becomes aware of everyone who knows its true name, and sometimes takes an interest. And you really do not want Lecter to take an interest in you.

** Yes, there will be an exam afterwards. 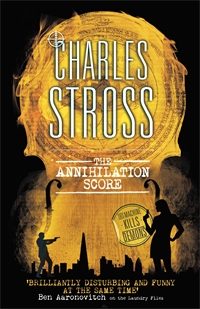 Award-winning British author Charles Stross has become a force to be reckoned with in recent years as his profile continues to grow. He is seen as go-to commentator on all manner of SF and technological issues, he’s vocal online and incredibly well connected. He has also had fantastic critical acclaim for his intelligent and often witty SF works. Charles was born in Leeds, England, in 1964. He has worked as a pharmacist, software engineer and freelance journalist, but now writes full-time. You can find his popular website at http://www.antipope.org/.

“Stross has pulled off yet another fast-paced blend of espionage thrills, office comedy and Lovecraftian horror . . . ferociously enjoyable”SFX on The Rhesus Chart

“Stross at the top of his game – which is to say, few do it better” Kirkus on The Rhesus Chart (starred review)