Set in a world of dark gods and dangerous magic, The Broken God is a gripping, darkly inventive fantasy tale in the series that began with Gareth Hanrahan’s acclaimed The Gutter Prayer.

That same day, again. More than a year ago, now.

In the dream, Artolo of the Ghierdana swaggers down a street in the New City of Guerdon. Spring is in the air, and there’s a spring in his step, too. He looks across the unlikely vista of the New City, this realm of fanciful spires and bridges, as if the froth of a breaking wave froze and turned to marble. He looks up at the towers, all conjured in an instant by a creation of the alchemists gone awry – or so rumour claims. Across the world, Guerdon’s chiefly known for the wonders wrought by the alchemists’ guild. Weapons from their foundries and cauldrons flow out across the sea to the Godswar and streams of gold and silver come flowing back.

In Artolo’s eyes, this New City is a sieve, straining the city, skimming off gold and silver for him and his family. It was born of chaos and crisis, and chaos always brings opportunity for those with the nerve to seize the moment. That is why Great- Uncle chose Artolo, out of all the family, to oversee operations in Guerdon. He’s got the strong hands needed.

In the few months he’s been here, he’s proved it. He broke the local criminal syndicate, the Brotherhood, operating out of the pisspot district of the Wash – he owns them now.

And he’s dealt with anyone else who crossed him.

No one crosses the dragons.

This is only the beginning. The New City doesn’t belong to anyone, not really. Half these enchanted spires are empty, or claimed by squatters and refugees who have no one to protect them, who can easily be driven out. Guerdon’s still knitting itself back together after the Crisis. The city watch’s wax golem- things, the Tallowmen, banished off the streets. The alchemists are rebuilding their broken factories, the Brotherhood’s gone, parliament’s staggering around stunned, run by some cobbled- together emergency committee. Even the local gods are moribund.

All wide open. All ripe to be plucked. Artolo runs his big hand along the smooth marble railing of the balcony, delighting in the sensation. He taps the Ring of Samara off the railing, and he can almost feel the whole city tremble, feel it quiver beneath his touch like it fears him. A horse to be broken, a woman to be taken.

It feels good. It feels right. It feels like the first time Great- Uncle took him flying. The New City around him might be a cloud in a shimmering sky, and he’s soaring towards his glorious destiny.

In the dream, he walks down a stairwell. His men bow their heads as he passes, murmur words of respect. Soon, the whole city will bow to him, too. Boss Artolo, Great- Uncle’s favourite. Great-Uncle’s Chosen.

He enters the cellar room. Two of his men wait, his cousin Vollio and Tiske. Loyal men, even if Tiske’s only Eshdana. Ash- marked, not one of the dragon’s kin. They’re holding a prisoner between them. A woman, young, dark- haired, struggling like an alley cat. Yowling like one, too.

“Quiet,” he snaps. He grabs her by the chin, twists her head so he can see her face. Her skin is marked by a dusting of little dark marks, like scars or burns. An ugly amulet of some black metal hangs around her neck. “I’m told that you’ve been spying on me. That you stole from me. That you stabbed three of my men.”

“Three that you’ve found,” she whispers.

“Do you know who I am?” He squeezes her mouth.

He releases her. Takes out his knife. The hilt is gold and studded with jewels. The blade is a dragon’s tooth, given by Great-Uncle. It’s more than a weapon – it’s a symbol of Great- Uncle’s trust, of his authority as a Ghierdana prince. He lifts the knife, enjoying the weight of it, the way it fits in his hand. It was made for him.

Artolo slams it into the woman’s face, hilt first. He holds the weapon up so she can see it.

“See this? Know what it is? I’m a boss of the Ghierdana. I’m Chosen of the Dragon.”

He puts the knife to her throat, pressing the blade against her skin.

A little more pressure, and the skin will open in a red spring.

A little more work, to saw through the cartilage, and then there’ll be that parting, that hot rush as the windpipe gives way.

“Cross me, and you cross the Ghierdana!” There aren’t any witnesses, down here in this cellar. Just Vollio and Tiske. Just the glimmering stone of the impossible New City. Still, Artolo likes to say his piece. He’s said it before, many times. It’s for his own good as much as anything else. Reminds him to be tough. Reminds him not to fail.

He looks the girl right in the eyes. There’s no fear there. She doesn’t think he’s going to do it. That makes him even angrier.

“Take from me,” he snarls, “and you take from the dragon!”

He draws the knife across her throat.

There’s a screeching, scraping noise, like he’s drawing the blade across solid stone. Sparks fly where the knife grinds across the soft skin of the girl’s throat. The knife – his knife, the dragon-tooth knife – can’t injure her.

Somehow, though, it injures the room around them. A dozen wounds open in the glimmering white walls, deep wet gouges tearing the stone, mimicking the path of the knife across her unblemished, still-uncut throat.

A miracle. It’s a fucking miracle.

But Great-Uncle told him there were no saints left in Guerdon.

The stone floor convulses, flinging Vollio and Tiske away from the girl. They land in opposite corners of the cellar room. The ceiling melts, long fingers of glistening stone cascading from it like stalactites, intertwining and blooming flowers of solid rock, walling off the corners from the rest of the room. In an instant, Vollio and Tiske are immured, locked away behind stone. Artolo can hear their muffled shouts of alarm.

The girl stands up slowly, a wicked grin on her face. Flushed with excitement, drunk on power.

Behind her, the cellar door quivers, and then the stone lintel above it melts, too. The only way out of the room clenches shut. He can’t call for help.

The knife can’t cut her. He slams the hilt of the blade into her nose.

The walls of the room – no, gods below, it’s the whole New City that takes the force of the blow. She’s untouched. He punches her in the face, and it’s like punching a wall. His knuckles come away bleeding, and it’s a game to her.

He can’t hurt her. He can’t kill her. He doesn’t have a gun, or anything more destructive. He needs a gun. Why didn’t he bring a fucking gun? He’s killed saints before, across the sea, but not without weapons. Not without Great-Uncle.

There’s no air down here; he can’t breathe. He can’t stand, and, in his panic, he can’t tell if it’s the floor or his knees that have turned to liquid. She looms over him, suddenly terrible and monstrous. He crawls backwards away from her, or tries to, but the ground is mirror-smooth and slick.

She picks up his dragon-tooth knife, admires the jewelled hilt. Flips it around expertly, examines the blade.

“You’ve blunted it,” she says. “It’s shit now.” She throws his knife to the floor. “But I’ve got my own,” she says, laughing, and produces her own blade from some hidden fold of her cloak.

Vollio was supposed to check the bitch for weapons.

“Call me the Saint of Knives,” says the girl, advancing on him. Then she stops, glances at the ceiling. “What? It’s a good name!” She pauses, as if she’s listening to some voice Artolo can’t hear. “Fine, I’ll get a magic knife then. A fucking flame sword, maybe. But first—”

She turns her attention back to Artolo. Her eyes glitter like the stone of the New City in the sun.

She can’t know that, Artolo thinks. Great-Uncle entrusted him with a mission so secret that it could only be given to one of the family. She can’t know about the Black Iron weapons. Who is this girl?

“I’ll kill you,” threatens Artolo, summoning the tattered remains of his bravado. There has to be some way to hurt her. Poison gas. Acid. Sorcery. Dragon- fire. She’s human. “I’ll fucking kill your family.”

She laughs. “Bit late for that. But if we’re swapping threats—” She closes her fist, and the wall holding Vollio mirrors her movement. There’s a muffled scream, and red rivulets squirt from the cracks in the stone.

The woman ignores him. “The Ghierdana aren’t welcome here. Go back and tell the dragon that. You won’t get a second warning.” She gestures, and the wall opens behind him, ripping and reflowing to form a new doorway. The graveyard stench of ghoul tunnels wafts from this second portal.

No one treats him like that. He is Artolo of the Ghierdana. Great-Uncle’s favourite. Chosen of the dragon!

The dragon-tooth knife is in his hand. He finds his footing, leaps at her. The bitch is half his size, small and weak, and, for all her miracles, she’s just a girl. Take her by surprise and—

—The dream ends like it always does. She turns around, like she saw him coming. Her knife goes in just under his ribcage, and his momentum carries him on as she twists, and now the white walls are all red, red, red. And he’s falling, like he’s slipped from Great-Uncle’s back.

The dragon flies on and does not look back. 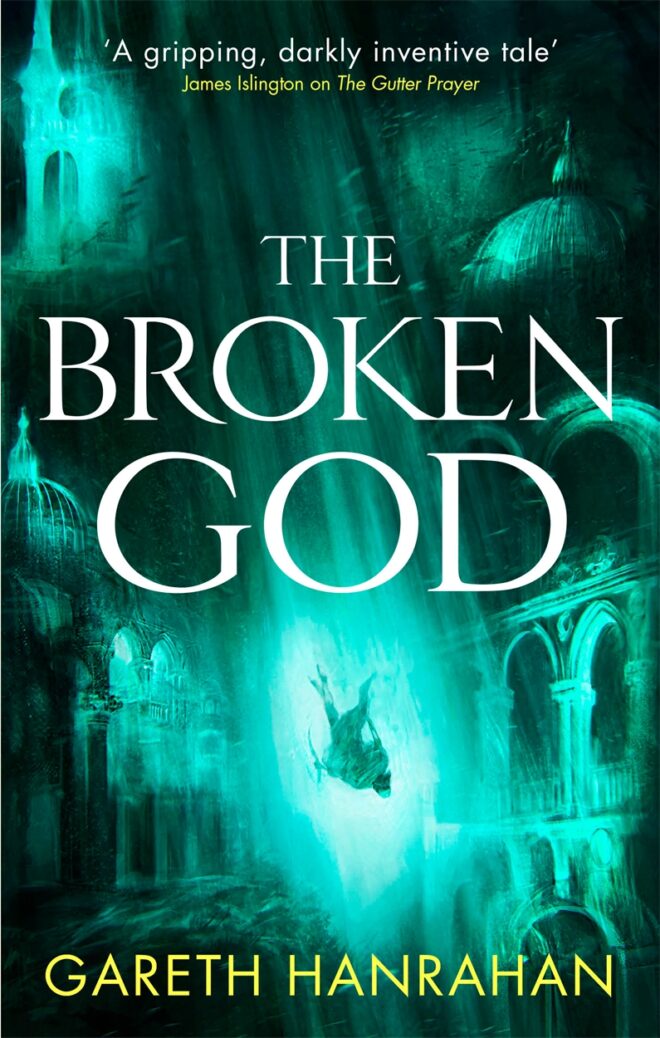 Gareth Hanrahan’s three-month break from computer programming to concentrate on writing has now lasted fifteen years and counting. He’s written more gaming books than he can readily recall, by virtue of the alchemical transmutation of tea and guilt into words. He lives in Ireland with his wife and twin sons. Follow him on Twitter @mytholder.

“An intricate and finely crafted web of compelling characters navigating a city rich in dark and original wonders. I await the sequel with the keenest anticipation” Anthony Ryan on The Gutter Prayer

“Already one of my favourite books from 2019. It’s original, incredibly well-written and honestly just so much fun to read . . . It’s the battlecry of an exciting new author who I feel has the potential to hit the very top of the genre. Put simply, you need to read this” The Fantasy Inn on The Gutter Prayer

“Mind-blowingly stellar in every respect . . . envision that The Gutter Prayer will not only win many readers’ hearts but also win multiple fantasy awards in the near future. Yes, it was that good. Read it. Thank me later” Novel Notions on The Gutter Prayer

“Hanrahan is now one of my favourite authors. I flat-out adore this series” Booknest