The second book in a new epic fantasy series from fan favourite Ian Irvine, set in the world of his View from the Mirror series

1
No One Could Help Her

“Gergrig wants the child,” said Yetchah, the weathered boards creaking as she moved around the circle of Whelm. Her dark eyes, touched by the firelight, blazed with longing. “If we give her to him, he will surely agree to be our master.”

Every hair stood up on Sulien’s head, and her throat went so tight that she could scarcely draw breath. The Whelm were going to betray her!

“Gergrig wants her dead!” grated Idlis. “And we swore to protect her with our lives.”

“You swore to protect her,” said Yetchah. “The rest of us vowed, after our incomparable master Rulke was slain, that we would do whatever it took to gain a master his equal.”

“Oh perfect master!” sighed the other eleven Whelm in the circle, and they raised their bony arms to the sky.

“The life of a nine-year-old girl is a small price to pay to gain such a master,” said Yetchah.

“We made Sulien into a little Whelm,” choked Idlis. “Would you send one of us, a child, to a cruel death by torture?”

For a moment Yetchah looked uneasy, then the ecstasy flooded back. “No outsider can ever be one of us,” she cried. “No one matters more than our new master.”

Sulien, crouching in the shadows, clenched her fists helplessly as they shuffled sideways in a ring around the fire. The crude stone fireplace was set on the boards of a long- abandoned village built on stilts at the centre of a chilly coastal lake. The flames roared shoulder high, the sole source of light on this winter night, but no warmth reached her. What could she do? Where could she go? The Whelm knew this cold southern land, which they called Salliban, and she did not.

She had lived in fear for months now; every day and every hour she kept watch for an enemy determined to see her dead. The attack could come through a mental link to burn out her mind, a blow from a stranger or poison slipped into her mug, and now from those who had sworn to protect her. Terror was crushing her; every day she felt smaller and weaker and a step closer to death.

Sulien had attempted a link to Karan many times, but it was as if her mother no longer existed. Had the Merdrun’s evil old magiz killed her? She choked back a sob. If she had, no one could help Sulien now. Not even Idlis, the strangest of all the Whelm, could defy their collective will.

He stood outside the circle, licking his flaking lips. He was trembling; he desperately wanted to join his people. How long before he betrayed her too?

Idlis and Yetchah had been at Sulien’s traumatic birth, and without them both mother and baby would have died. Sulien had often seen Yetchah gazing at her yearningly, as if she longed for a child of her own. Sulien had felt closer to her than any of the other Whelm, but this Yetchah was a cold, obsessed stranger.

Sulien backed away across the rough- sawn boards, which were weathered to a splintery grey. Everything was grey in this awful place: the wet sky, the crumbling huts and even the Whelm themselves. Their lips were the colour of dirty snow, their eyes as dead and dark as soot.

On the long journey south they had kept up the chanting for hours at a time, dully and listlessly. But two days ago, when Sulien made a despairing link to the magiz on the little world of Cinnabar, attacking her to try to save Karan’s life, everything had changed.

The magiz, a hideous enchanter, drank innocent lives to give herself the power to open the ancient Crimson Gate that would finally bring the Merdrun to Santhenar, the beautiful world they had long coveted. Sulien’s world. The mighty Merdrun army was unconquered in ten thousand years of warfare aimed at a single purpose – to escape the void and seize one of the real worlds for their own.

But Sulien’s link had revealed Gergrig, the greatest warrior and most ruthless leader in the void, to the Whelm. And they knew on sight that he was the perfect master they craved so desperately. They would do whatever it took to get him.

Now he was somewhere on Santhenar, for just minutes ago the magiz had succeeded in opening the Crimson Gate. This is the hour! Gergrig had roared as his army stormed the gate. And the Whelm had cried out their ecstasy.

Mummy? Sulien had sent desperately, over and again. Help!

But Karan had not answered. Sulien’s only chance was to run, though Salliban was a cold, wet wilderness and winter was underway. Without food, shelter or anyone to help her, how could she survive it?

Sulien slipped away to the hut she shared with Idlis and Yetchah, and tied her bedroll to her pack. She stuffed in half a dozen bags of the gritty grey cereal the Whelm used to make their daily gruel and added her knife, metal cup and wooden spoon.

They were still chanting like a flock of evil crows. Some distance away, Idlis, a gaunt, tormented loner, shifted his weight from one bony foot to another and twisted his fingers together. His skin was so rough that Sulien could hear it rasping, and the breath hissed in and out of his tunnel-like nostrils.

As she slipped out through the door he turned her way and the firelight touched his eyes until they blazed red-black. She froze. He was looking right at her; even in the dimness of the abandoned village he must have seen her.

Sulien stared back at him, her small body rigid. You gave your word, she sent. You swore to protect me. She did not know if he could hear sendings; few people could. But the plea in her eyes was clear enough.

After an endless few seconds Idlis’s left hand gave a tiny jerk. Sulien interpreted it to mean that he would not stop her. She crept around the hut then, keeping to the band of shadow behind it, darted across the deck towards the walkway that led to the shore a quarter of a mile away.

Then stopped. If she used the walkway the Whelm would know where to look for her tracks. She turned and, heart pounding, felt her way across the southern side of the deck to the rickety ladder down to the lake.

As she went down the ice-crusted rungs, the cold came up through the soles of her worn boots. The surface of the lake had been frozen three inches thick when they arrived a week ago, though there had been a thaw since then and the ice was cracked and dotted with the Whelm’s square fishing holes. If she fell through she would freeze to death before she could get out.

Sulien slid one foot forwards, then the other, rasp, rasp, testing the ice with each step. The night was still. If the Whelm stopped chanting they would hear her.

She gained the shore, reached out, and her fingertips touched a steep moss-covered bank. It rained most days here, and the Whelm, who were brilliant, relentless hunters, would easily track her across the soft ground.

The lake, one of hundreds in this rain-drenched land, was surrounded by a coniferous rainforest of vast old trees, widely separated and hung with grey-green streamers of a plant Sulien had never seen before. Karan’s geography lessons had covered the frozen interior of the south, which was called Shazabba, but Sulien knew nothing about Salliban save that it was home to many kinds of beasts that would enjoy eating her.

She stepped up off the ice onto moss that sank two inches under her slight weight, though when she lifted her foot the moss sprang back again. Endless forest lay ahead but it was too dark to see the way. Arms outstretched, she turned her back on the gaunt figures encircling the fire and their cawing cries of “Yes, yes, yes!” and headed east towards the range of mountains she had seen from the ship on the way here. It felt safer than heading north along the coast, which was so indented with fjords that it might take ten miles of walking east and west to get one mile further north, closer to home.

Gergrig wanted her dead because, in her first nightmare about him, she had seen the Merdrun’s one fatal weakness, and as long as it lay buried in her mind they would kill her to protect it. The only way to save herself was to recover the nightmare and tell as many people as possible, but it had vanished like a dream on waking. She could not remember a thing and neither Karan nor anyone else had been able to recover it.

The ground was all hollows and humps here, and fallen trees often blocked her way. She kept stumbling into them in the darkness.

She reached the top of a small ridge and was standing there, icy hands in her pockets, wondering which way to go, when she heard a collective roar behind her. Her heart lurched; the Whelm knew she had bolted.

Sulien darted down the slope away from the lake. They were slow and awkward; she could outrun them for a little while. But the Whelm never gave up and they would get her in the end.

A blow to the face and chest knocked her back onto the moss. She lay there, her forehead throbbing, tasting blood; she had bitten her lip. She sat up and probed forward along a mossy mound, and up. She had run into the trunk of a tree.

Sulien felt her way around it and tried to regain her bearings, but she could see nothing save an occasional luminous mushroom. Using her sensitive’s gift, which she did not understand, she sought the unnerving presence of the Whelm and found it some distance to her left.

She stretched out her arms, turned until the presence was directly behind her, in the west, then, her head aching and her heart as icy as her feet, headed east towards the unseen frozen mountains. 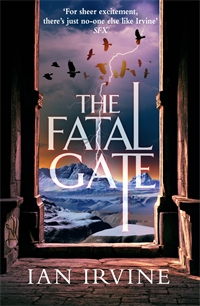 Ian Irvine lives in the mountains of NSW, Australia. He has been writing epic fantasy novels for over a decade and is the author of classic series the View from the Mirror, the Well of Echoes, the Song of the  Tears and the Tainted Realm. His latest novels, The Summon Stone and The Fatal Gate, are a return to the fan-favourite world of the View from the Mirror.

“For sheer excitement, there’s just no one else like Irvine” SFX

“Great action set pieces . . . This is the sort of book you’d pick up if you were prepared to be late for your next appointment” Bookbag on Vengeance